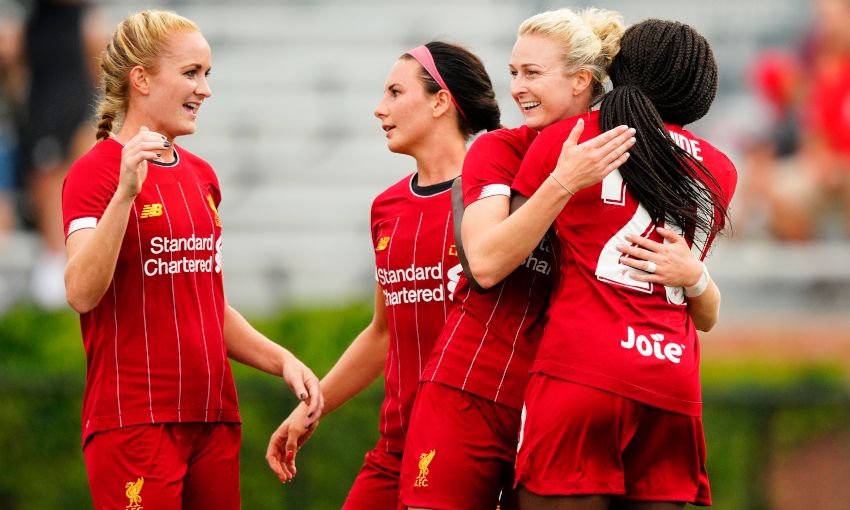 As Liverpool FC Women prepare to bring their stay in America to a close, Sophie Bradley-Auckland has spoken of the honour and pride she has felt at leading out the team on the USA tour.

The captain has witnessed at close proximity just how excited the team has been to represent the club together with the men's side.

"It's an honour, a massive honour," Bradley-Auckland told Liverpoolfc.com.

"I'm definitely missing home, being without my little girl, but my husband said to me before I came out here, 'Just go and enjoy it, she will be fine.'

"To lead these girls out with this great team and our great management team, I'm loving it!"

During their stay in Boston, LFC Women travelled on the official Big Red 2 team bus - a gesture that the No.6 admits was special.

"The little things mean the most," Bradley-Auckland added.

"When we stepped off that plane and Peter Moore [LFC chief executive officer] showed us the bus, that meant so much to us because we are not used to that.

"To be out here with the men's squad and to be doing lots of community work out here is just fantastic and it's given the girls a taster and I think we deserve that.

"You can see we are pushing on as a club and we are one club."

Following the 2-2 draw with Cleveland Ambassadors in South Bend, the Reds enjoyed a brilliant final tour match as they hit six without reply against the Metropolitan Conference Allstars at Harvard University on Monday night.

Last season's top scorer, Courtney Sweetman-Kirk, continued where she left off by netting four times, with Rinsola Babajide adding the other two.

"You couldn't have asked for more," she added.

"There were lots of positives from our first game but we needed to push on from that and I thought we did that.

"Full credit to the girls, they kept going, kept pushing and that's we want. We want to get the minutes in and we also had the quality there."

New signing Melissa Lawley again caught the eye with a superb performance in the final third of the field while fellow summer recruits Becky Jane and Jade Bailey have also made a seamless transition into their new surroundings.

Bradley-Auckland feels the trio have brought an added dimension to the team.

"They don't look like new players to me," said the skipper. "They have literally slotted straight into the team and they have brought so much quality to the team.

"I'm sure Courtney is buzzing with the quality of that delivery and she just needs to make sure she gets on the end of it. It's what a striker dreams of and we call her our fox in the box because she is always there!

"Well done to all of our new players because coming out on a tour like this is a big thing but getting to know each other on and off the pitch has really helped."

Watch: Highlights of the 6-0 win at Harvard

Following the impressive displays of Lawley so far, Bradley-Auckland already considers her signing an inspired capture from Manchester City.

"She has set her standards high," she said.

"As players and management I'm sure we will keep drilling that out of her because she is a quality player.

"We are lucky to have her on board but I think she is enjoying it. When you play like that you enjoy it and she looks relaxed, she looks chilled and she is loving it.

"I asked her if Courtney is paying her for all of these assists because she should be!

"It's great to have a bit of banter in the dressing room because that's what you need. It was a brilliant performance from the team."

Sweetman-Kirk took her goal tally to five in two outings so far and the No.9 admitted it was a nice feeling to hit the goal trail so early. 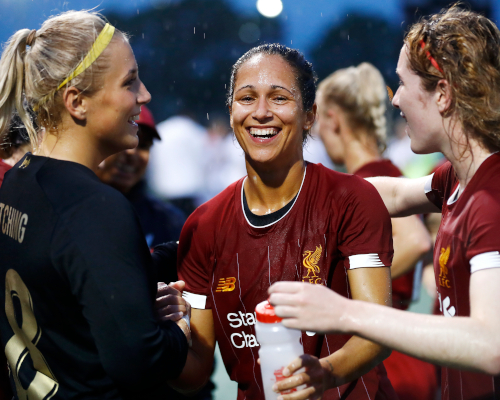 "As a striker you are always pleased to get on the scoresheet and to do it so early in pre-season I think it builds your confidence, but from the whole team I thought it was a professional performance and we played some really nice football," she said.

"We have come out here to push ourselves, get some confidence and obviously our fitness so we are very happy with that performance.

"We are building something very special and we are showing it's going to be a very exciting season."

One of Sweetman-Kirk's goals came via a powerful header from an excellent Jemma Purfield cross from the left flank.

"Jemma made it very easy for me with that cross and if I hadn't got on the end of that I would have been quite disappointed. I was quite pleased with that," she said.

"It's always nice to score and hopefully I can keep that going when the season starts."

Reflecting on the tour as a whole, the No.9 explained why it has been a trip nobody in the squad will ever forget.

"It has been a great tour coming away with the first team and showing that we are one club and we are part of that," she concluded.

"I think it's very important and it has been a great experience for all of the girls.

"It has also been a chance to show how professional we are and how good we are and I think we have done that."

'I wanted to say goodbye and thanks to Liverpool fans'

Sophie Bradley-Auckland: Why my Liverpool career is on hold

Bradley-Auckland up for WSL Player of the Month award