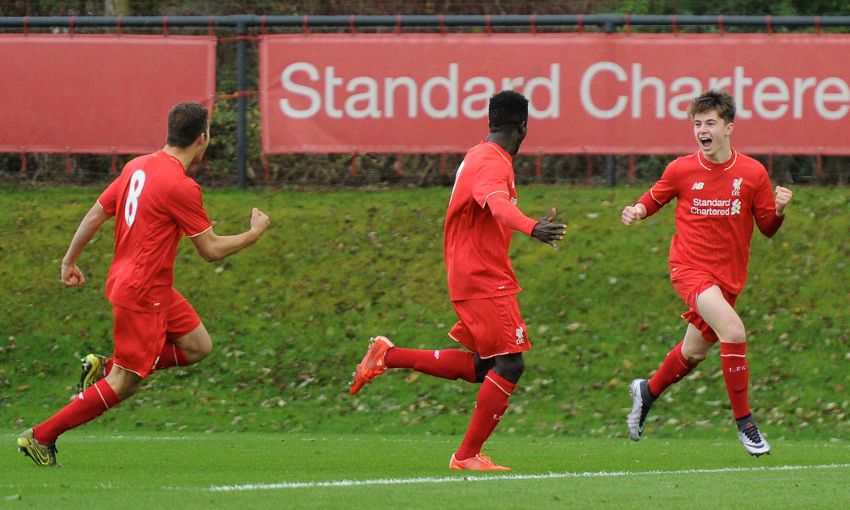 Two first-half goals proved enough for Liverpool to inflict a 2-1 defeat on rivals Everton in a hard-fought U18s Merseyside derby clash at the Kirkby Academy on Saturday.

Neil Critchley's side carved out a comfortable lead through Ben Woodburn and Adam Phillips as they earned the deserved reward for a sensational performance in blustery conditions over the course of the first 45 minutes.

The Toffees rallied following the break, though, and after pulling a goal back through Delial Brewster, they threatened to bring things level on a number of occasions in a much-improved second period from their perspective.

However, the hosts held firm to secure a win that moves them within one point of their neighbours, who currently lead the Barclays U18 Premier League standings.

The Reds had to wait until the 93rd minute to get on the scoresheet in the reverse fixture back in September, a 1-1 draw at Finch Farm, but there was no hanging around this time.

With just two minutes on the clock, Woodburn exchanged passes with Toni Gomes at pace before coolly passing the ball beyond Ciaran O'Loughlin to give the hosts the lead.

Only last week, Jürgen Klopp described windy conditions as "the enemy of football" in the aftermath of the first team's 1-0 win over Swansea City, and so the German would have been doubly impressed with the efforts of the U18s in the opening stages in Kirkby.

They almost doubled their advantage multiple times in the opening 15 minutes, with Gomes unfortunate to see his shot blocked after a Trent Alexander-Arnold cross before Conor Masterson's header was stopped on the line by Steven Kinsella.

A fantastic one-two between Ovie Ejaria and Gomes, the standout performers of the half, then resulted in the latter firing wide.

Critchley's men would not be denied, however, with Phillips making it 2-0 in somewhat scruffy fashion as he forced Alexander-Arnold's cross from the right home late in the half.

Only a great save prevented the midfielder from doubling his personal tally just before the break but, that Everton remained within two goals at half-time provided them with hope, and the visitors resembled a new team after the restart.

As such, they deserved to get themselves back in the match when Brewster smashed powerfully home after the Reds failed to clear a corner ten minutes into the second half.

The Blues' goal handed them a much-needed confidence boost and they were unfortunate not to be level with an hour gone as Michael Donohue cracked a shot off the post after a fine run.

However, Phillips provided an instant reply as he curled in a left-footed cross that, with assistance from the strong winds, looped over the goalkeeper and came back off the woodwork.

Fans in Kirkby were treated to an end-to-end denouement to what had been a thrilling contest but, thankfully for those of a red persuasion, the hosts saw off any threat from Everton to clinch the victory.