Support the young Reds at Langtree Park on Wednesday night

Liverpool’s U18s hit the FA Youth Cup trail when they take on Ipswich Town at St Helens Langtree Park this evening, with the young Reds hoping to follow in the footsteps of the class of 1996.

Next year marks the 20th anniversary of Jamie Carragher, Michael Owen and co lifting the trophy for the first time in the club’s history under the guidance of Steve Heighway and Hughie McAuley.

Neil Critchley's team will now look to mark that milestone in the best possible fashion and, having gone 13 games unbeaten, confidence in the camp is high.

“The boys are excited and make no mistake we want to win,” Critchley told Liverpoolfc.com.

“Liverpool have got a history of doing well in the FA Youth Cup and we would like to be maybe the next team to add to that.

“I remember when Liverpool won it for the first time 20 years ago because I was playing then and played against that group, so I know how good they were.

“I thought last year we were unfortunate to lose to Birmingham because I felt we were the better team on the night but sometimes it just doesn’t go for you in a one-off cup tie.

“I can’t tell you we are going to win it but I can tell you we will give it everything to make sure we keep winning and progress as far as we can.”

Critchley and his squad won’t be taking things for granted, though, and the U18s boss is aware of the problems the young Tractor Boys can pose.

He added: “We are expecting nothing but a tough game.

“You can’t predict what is going to happen with the Youth Cup as we’ve had some extraordinary nights during the past two seasons.

Critchley’s charges have scored 33 goals so far this season, with 28 of them coming on that 13-game unbeaten run.

But there are plenty of qualities, aside from ruthlessness in front of goal, that the U18s boss has been pleased by lately.

He continued: “I’ve been pleased with our performances. We have been playing really well and shown different sides to our game, coming from 3-0 down and 2-0 down to win games.

“We had a really good performance away at Manchester United when we won 4-0 and we’ve had different types of games.

“We’ve shown different sides to our game during our run and we want it to continue for as long as possible.

“When you play for Liverpool you are used to winning games. We don’t make a big deal about it [the unbeaten run] to be honest, we talk about the performances and how we can get better.

“We put them in a hostile environment and challenge them. The confidence is good and we’ve got to make sure we continue that, not get complacent, and keep to our standards, keep pushing and try to do better.

“It’s not just scoring goals which has pleased me because if you look at our goals for and against record we are difficult to score against as well.

“We are well organised, hard to beat and always have a threat in the top half of the pitch. We have a really good chemistry in the team, we’ve got competition for places and it all bodes well for the future.” 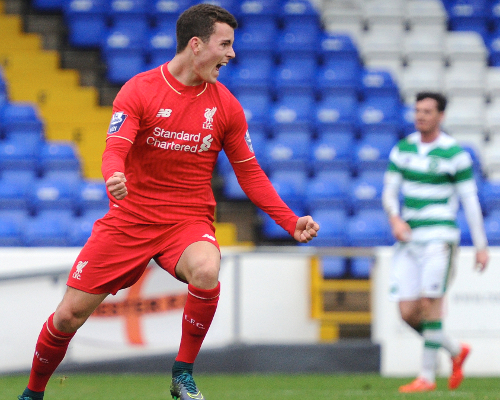 One youngster hoping to get the call against Ipswich is American starlet Brooks Lennon.

The 18-year-old, who joined the Reds from MLS side Real Salt Lake City, scored his first goal for the club during the U21s' win over Celtic on Saturday.

The forward is highly thought of, and Critchley is delighted to have him in his squad.

He enthused: “We’ve had to be very patient, as have Brooks and his family, to finally get his paperwork and the documents to come over.

“A lot of people have put a lot of work into it and we are delighted he is here. Brooks came over in the summer but he had an injury so it was a frustrating time for him and us.

“We are just delighted he is now fit and training and starting to build up his minutes. He’s been working extremely hard and he is a very focused individual.

“Brooks has good talent and he’s a got a good character as well, a good personality and we are looking forward to working with him in the future.

“We are not going to put too much pressure on him. We will let him enjoy his football and let him fly a little bit.”

'These boys are relentless in their pursuit of getting better'