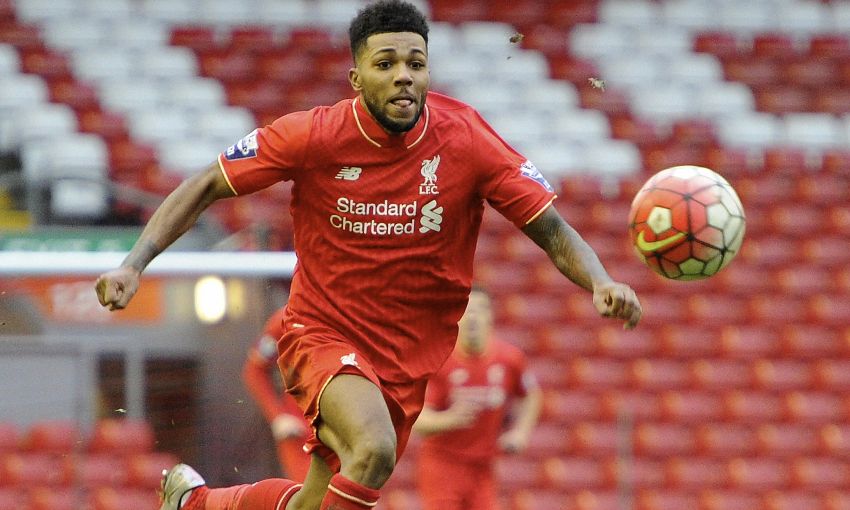 U21s to face Brighton in cup clash on February 14

Jerome Sinclair was the hero as Liverpool U21s completed a dramatic turnaround to reach the semi-finals of the U21 Premier League Cup with a 4-3 win over Brighton & Hove Albion on Sunday afternoon.

Michael Beale’s side had to come back from behind twice but won the quarter-final tie with an extra-time goal courtesy of second-half substitute Sinclair.

Brighton had initially took the lead eight minutes in at Prenton Park through Tom Dallison before the Reds quickly pegged them back with Jose Enrique’s deflected goal.

Two James Tilley goals either side of half-time put the visitors 3-1 ahead before Ryan McLaughlin, back off the bench after injury, pulled one back midway into the second half.

Sinclair levelled proceedings in the 75th minute with his first touch and then won the game for his side right at the start of extra-time.

Beale had put out a strong starting XI, including Tiago Ilori and Pedro Chirivella, who returned to youth action following their exploits with the first team in the FA Cup tie against West Ham United earlier this week.

The hosts started the affair the brighter by enjoying the greater share of possession. Sheyi Ojo had a good chance four minutes in but his strike at goal was well saved by goalkeeper Christian Walton.

However, the Reds found themselves behind moments later. Central defender Dallison leapt highest from Dessie Hutchinson’s free-kick to break the deadlock.

But Liverpool bounced back through Enrique in the 12th minute. The Spaniard’s deflected effort ended up in the back of the net and drew the sides level after good play from the hosts.

Brooks Lennon then almost put the young Reds in front, but the American headed just wide from Ryan Kent’s inviting cross from the left.

In a frantic first 20 minutes, Enrique then was adjudged to have brought down Jonah Ayunga in the penalty area and the referee subsequently pointed to the spot.

Tilley stepped up and converted the spot-kick, sending Adam Bogdan the wrong way to put the visitors in the lead.

Despite being down a goal, the Reds continued to dominate. Walton pulled off a wonderful save to deny Ojo from close range, after a solid spell of pressure.

Quick thinking off a free-kick from Connor Randall nearly drew the tie level. The defender passed to Chirivella while the Brighton defence were organising themselves but the midfielder’s attempted pull-back was well cleared for a corner, with a number of red shirts waiting in the box.

Liverpool returned from the break looking to equalise quickly. A good spell of pressure eventually led to Chirivella striking at goal but his effort went over the crossbar.

Bogdan prevented Brighton from adding a third with an excellent save, with the Hungarian showing great reactions to keep out Jess Starkey’s goalbound shot.

But the visitors did go on to secure a two-goal cushion just before the hour mark. Tilley grabbed his second of the day with a well-taken finish after the Reds failed to clear from a corner.

Northern Ireland international McLaughlin replaced Matty Virtue after 63 minutes and immediately made his mark on the game.

Coming on to play on the right wing, McLaughlin side-footed in off a cross by Enrique on the touchline to bring Beale's charges back into the tie.

Another Liverpool substitute then made an immediate impact. With his first touch, Sinclair tapped in to make it 3-3 after the Brighton custodian parried McLaughlin’s effort into the striker’s path.

But they were unable to break down a stern Brighton defence and further 30 minutes of football was called upon.

Three minutes into extra-time, the two substitutes combined again to put Liverpool in the lead for the first time in the tie.

More brilliant work from McLaughlin saw him beat a Brighton defender with ease and then cross for Sinclair to finish and complete the turnaround.

Sinclair hit the post in the second half of extra-time but the Reds had already done enough to record a remarkable win and book their place in the final four.