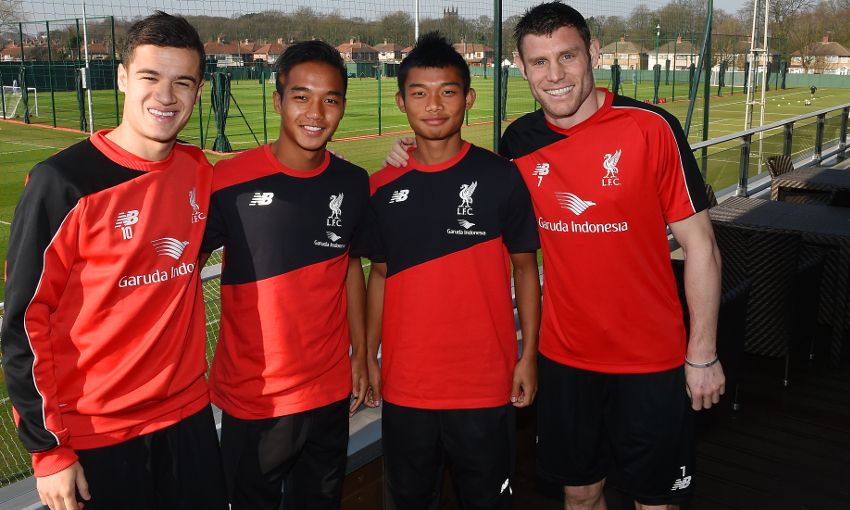 Two Indian internationals are visiting LFC’s Academy and Melwood training ground this week in recognition of their hard work and achievements at the LFC International Academy in Maharashtra, India.

Jerry Mawihmingthanga and Lallianzuala Chhangte (known as Zola to the International Academy) have been invited to Liverpool to take part in a week-long coaching programme at the LFC Academy in Kirkby, making them the first ever players from the LFC International Academy – DSK Shivajians to ever be awarded the chance.

The first stop on their experience was Melwood, where the duo got the chance to meet first-team players James Milner and Philippe Coutinho to pick up some tips and words of encouragement before observing a first-team training session led by manager Jürgen Klopp.

The two young players who have been with the LFC-DSK Academy for around two years have performed impressively for both the Academy and the India national youth and senior teams.

Lallianzuala recently became LFC-DSK’s first ever player to play for the Indian senior team, making history for not only being the nation’s youngest ever debutant but also youngest ever goal scorer.

Mr Shirish Kulkarni, executive director of DSK Group, said: “It is heartwarming to see that we have players from India who have been invited on merit to train at the Liverpool FC Academy, something which has been a part of our vision for the Academy since its inception.

“Certainly, this opportunity will lay down the pathway for Indian football to follow in the coming years. It will also go a long way in establishing Liverpool FC International Academy – DSK Shivajians as the Centre of Excellence for footballers in India.

"On behalf of the DSK Group, I would like to wish Lallianzuala (Zola) and Mawihmingthanga (Jerry) a successful outing.”

Launched in 2014, the Academy is currently home to 64 of India’s finest young talents across U19 and U17 age groups, all receiving access to world-class infrastructure, facilities and coaching from Liverpool FC coaches who are based in India full-time.

Since its launch, the LFC-DSK Academy has gone on to enjoy much success of which Zola and Jerry are just two shining examples.

For more information on the LFC-DSK Academy please click here.