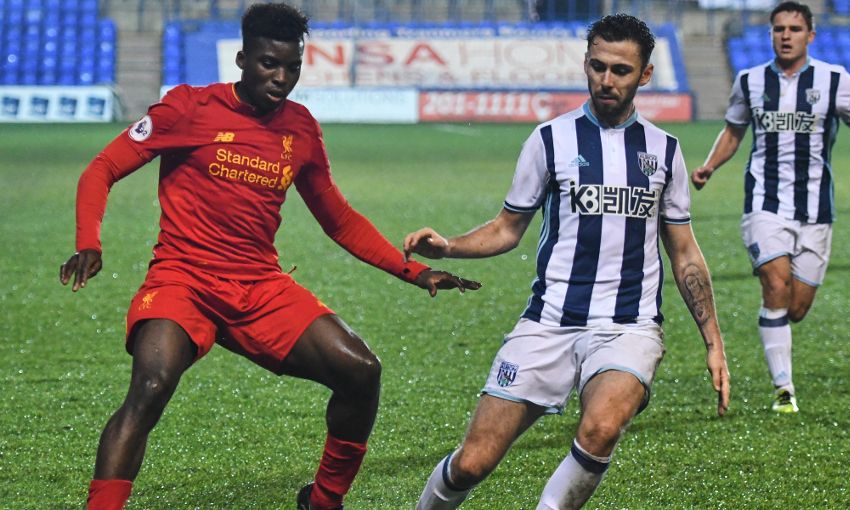 Sheyi Ojo stepped up his fitness by playing 90 minutes as Liverpool U23s came from behind to draw 1-1 with West Bromwich Albion in the Premier League Cup at Prenton Park on Tuesday night.

The 19-year-old had an outstanding game and created the hosts' equaliser, which was brilliantly finished by Cameron Brannagan in what proved to be Michael Beale's final game as manager.

Also playing the full 90 minutes were Trent Alexander-Arnold, Ovie Ejaria and Ben Woodburn, all of whom featured for the first team in last week's EFL Cup win versus Leeds United and were on the bench at Bournemouth on Sunday.

Having already recorded two victories over Ipswich Town and Huddersfield Town in the Premier League Cup, the Reds U23s strengthened their position in their group with the Baggies draw and now have seven points.

Despite trailing to a well-taken 24th minute looping header from Andre Wright, Liverpool showed resilience throughout and could consider themselves unfortunate not to have claimed the three points such was their dominance in the second half.

Clear cut chances were few and far between in the opening 45 minutes as West Brom's defensive approach stopped the Reds from exerting their usual attacking fluency; Woodburn fired an effort just past the post while Harry Wilson and Pedro Chirivella also went close.

Chay Scrivens might have made it 2-0 just before the interval when he curled a free-kick inches past the post, while at the other end Ejaria had spot-kick appeals waved away after being brought down in the penalty area.

Nevertheless, the home team stepped up a gear in the second half with Ojo and Alexander-Arnold a constant threat down the right-flank.

And the equaliser duly arrived on 73 minutes when a delightful pass from Ojo set up Brannagan, who finished with aplomb.

Beale's side created chance after chance as the game edged towards a conclusion, but just couldn't find the elusive winner as he departed from the helm after the contest on the back of a draw.

LFCTV GO: The best of the West Brom action

The Reds came desperately close to a winner in stoppage-time when Ejaria's effort was brilliantly kept out by Jack Rose.

Liverpool U23s are back in action on Monday night when they host Arsenal at Anfield.