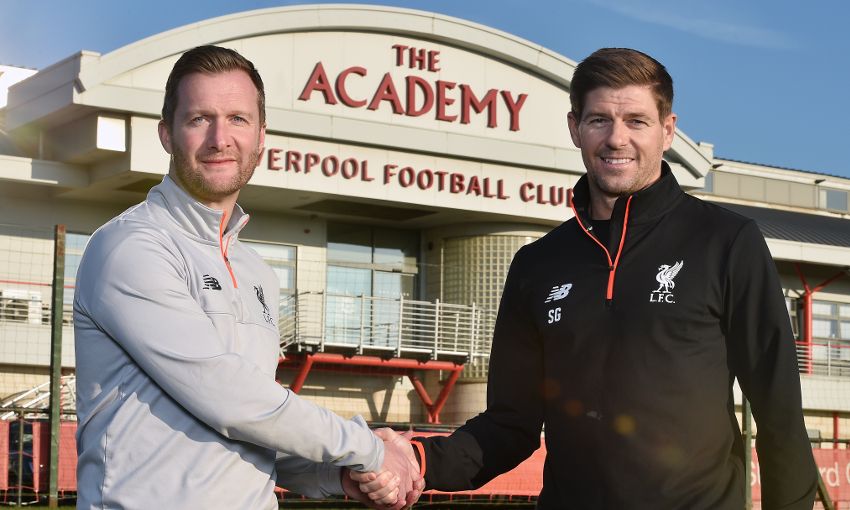 'Why Trent display brought back fond memories for me'

Alex Inglethorpe has outlined the motivation for both parties to bring Steven Gerrard and his 'incredible insight' back to Liverpool as an Academy coach.

The Reds legend is set to return to the club in a full-time position at the youth complex in Kirkby from February, where the former captain and talismanic midfielder will operate in a wide-ranging role in the development of young players.

Academy director Inglethorpe has hailed the appointment as hugely beneficial for both the club and Gerrard himself, with all at the base determined to continue the flow of youngsters into the first-team squad under Jürgen Klopp.

Speaking to Liverpoolfc.com to discuss today’s announcement, Inglethorpe explained how Gerrard’s role will work, why he can be a success and the aims and ambitions of the Academy for the future.

It’s obviously a very significant day. How excited are you?

Myself, along with everybody at the Academy, is not only excited but consider ourselves lucky to have Steven back with us and ready to work at the Academy.

Like any coach, he’ll have a schedule he’ll work to. The idea at the beginning is to come in and complete his ‘A’ licence. He is going to assess various age groups, primarily in the older groups, 15 to 23. He’ll assess all of that, have a look and get involved in the coaching with various groups, with the intention eventually of having a group himself – having a team to run and all the responsibilities that come with that.

How significant is it having someone of Steven’s stature – not just as Steven Gerrard the player, but what he has gone through and the system he has graduated through?

Steven possesses many qualities that you’d want our young players to have access to. Of course he is got a wealth of football knowledge. I know he understands the journey that a player is going through. When you’re with him and seeing the old photographs and asking questions of what he was like when he was 16, his Youth Cup disappointments, his debut or how he had to survive his first 10, 15, 25 games, there is a clear empathy there for what the young players are going through. There within probably lies the making of a very good Academy coach.

Liverpool’s Academy system is famed for producing the likes of Steven Gerrard. So having the man himself passing on his experience is a massive bonus for the club…

It’s more than that. Someone like Steven, clearly he is a role model. For a young lad, imagining now that you’ve got Steven Gerrard trying to help you in any way he can – whether that’s through a bit of understanding or things you might need to improve on in your game – who wouldn’t listen? Straight away he is going to get their attention, and he’s earned that. Not every coach can do that, there’s a lot of coaches who have to earn the right to get a boy’s attention. But Steven has earned the right straight away to come in and I have no doubt that the young players will all be desperate to work with him. 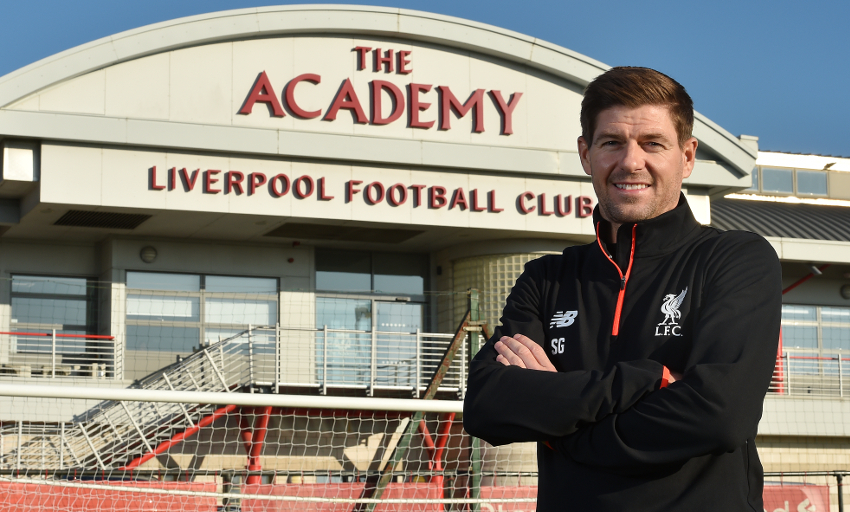 He has been very clear in that he wants to earn the right as a coach. It’s not about him living off his reputation as a player and he’s prepared to do the hard yards…

Absolutely. With the discussions that we had, it came across almost immediately. I think he’s being a bit hard on himself; he feels like he’s starting from zero, and he’s clearly not. He has the attitude of not wanting to be fast-tracked, doesn’t want any special favours and doesn’t want the game to give him something he doesn’t feel he has earned yet. It’s typical humility that he shows in the way he’s played the game. If we can help him in any way to get on the coaching ladder or just to get a start in doing something he’ll hopefully want to do and become successful at, then we’ll all be very proud.

What do you think has made him so enthusiastic about this specific role?

First and foremost, it’s familiar. So he’s going into an environment where, with respect, we all understand he’s Steven Gerrard but I don’t think anyone is going to treat him that way when he’s here. It’s going to be ‘Steven’ or ‘Stevie’. Whether it’s Michael Yates, Ian Dunbavin or Tom Culshaw, he’ll have played in the youth team with a lot of our coaches who are now here working. And, of course, there’s Steve Heighway, who would have been one of the biggest influences in his career, certainly when he was young. The environment at the Academy isn’t going to be one where we’re going to be blown away every time we see him, it’s one where he can hopefully come here to work, learn and – most importantly – feel normal. The intention from everybody at the Academy is that he is one of our coaches now. That’s hopefully one of the attractions about coming back.

He has obviously got a lot to learn as a coach, as he would admit himself. But what qualities have you seen in him that suggest he will be successful?

If you break the game down into its various forms, from a technical or tactical standpoint he has got an incredible insight into what you need to be successful. He has played the game at the highest level, so he’ll understand the game and what it looks like, and the demands that are there. One of the best qualities he’ll have is how he thinks, and if he can impart that to his players – whatever age group he’s working with, the determination he showed or how he gave everything to each game – that aspect will make him incredibly successful.

Your relationship with Steven is going to be vital. How will you look to help him?

In any way that I can. The most important thing, to begin with, is just to give Steven the opportunity to work and coach and find a way himself. Then if I can be of any use going forward, I’ll assist in any way that I can. But Steven is bright enough and dedicated enough, I’m sure he’ll work it out himself. I have no doubt in that. If I can assist in any way going forward then of course I will. 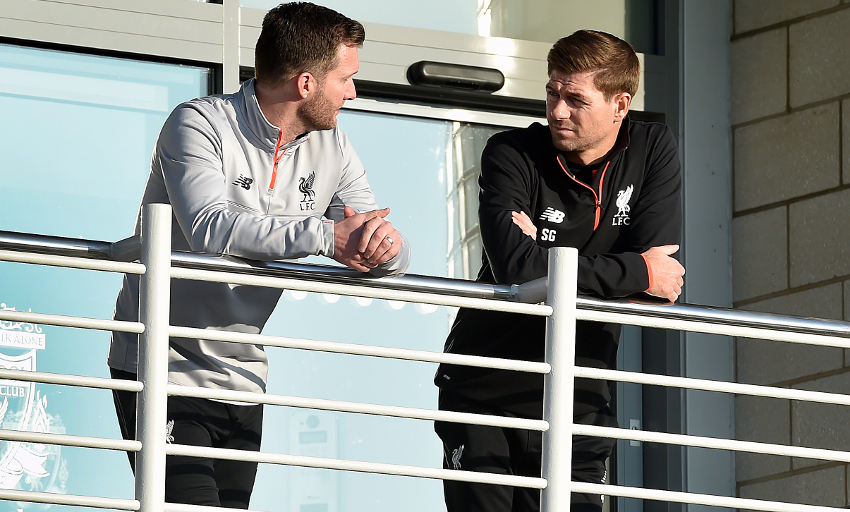 There’ll be plenty of fanfare about Steven Gerrard returning to the club, but come his first day it is serious business isn’t it?

Yes, it is. That’s how he wants it. This isn’t a token gesture, this isn’t a token appointment, this is genuine from both sides. This is a genuine offer to come in and work and improve the boys he is working alongside. That’s exactly what it is. It’s a coaching role. And, speaking to Steven, he wouldn’t want it any other way. This isn’t a gesture, this is something he wants. We are privileged to have him back here working with us and we’re certainly going to make the most of the opportunity.

We’re really lucky at the minute. First and foremost, we have a manager who has given everybody at the Academy hope. Without that, there is a lot of hard work, a lot of dedication, long hours being a coach where you feel you can sometimes maybe be working without that purpose. But he has given everybody hope. The young lads have hopefully come in and acquitted themselves in a way that he would want. In that respect, at the minute it is a positive place to be. It’s nice to see some of the boys getting an opportunity. We actually haven’t cracked it until we’ve got someone playing week in, week out and winning trophies with the club. That’s success. At the minute, it’s just positive signs.

We’ve all got to be measured in our excitement around these young lads, but it still must be a very proud moment for you?

It is, of course it is, because a lot of hard work will have got them to that point. Not just by the players, but by the families, coaches who may have now left the Academy – it’s never just one person, it’s a collection of people that have hopefully got the boy to that point. But it is only a beginning, and the boys that are playing at the minute have got to realise there is an awful lot more to a career than a debut.

Finally, right now, what is coaching in ‘the Liverpool way’?

Steve Heighway would probably be able to give you a better answer to that, because he has lived it for so long now. If you speak to Steve, if you speak to Steven Gerrard or if you speak to Kenny Dalglish or anyone who has devoted pretty much their life to working at the club, they’ll tell you it’s not just a style of play, it’s about how you live, it’s about truly embracing the supporters, it’s about dedicating yourself to improvement, and of course it’s always going to be about winning.