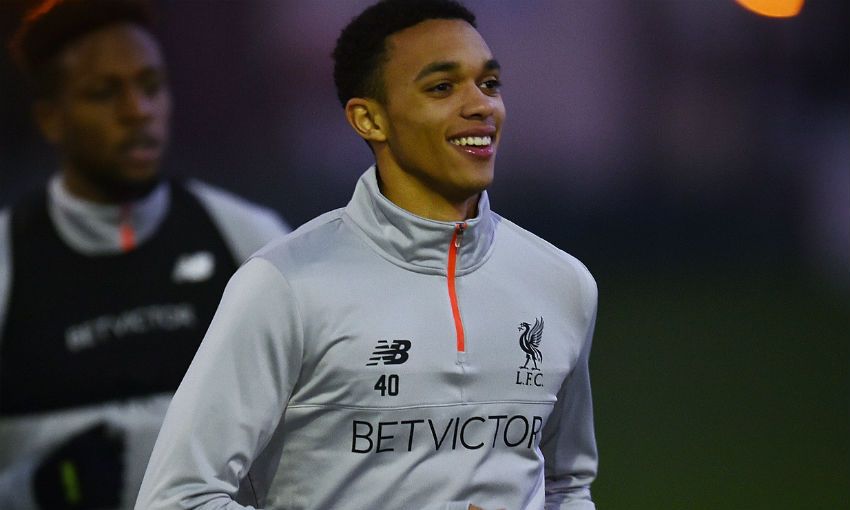 Liverpool U23s coach Mike Garrity believes Trent Alexander-Arnold proved he has 'gone up a level' with his superb performance against Tottenham Hotspur at Anfield on Sunday.

Alexander-Arnold won a penalty and provided an assist for the winning goal as the young Reds came from two goals down to beat Spurs 3-2.

After spending last season captaining Neil Critchley’s U18s side and impressing for the U23s in the early months of this campaign, the 18-year-old made his first-team debut against Tottenham in an EFL Cup fourth-round tie in October.

A new long-term contract and a maiden Premier League start in last month's draw with Manchester United have followed - and Garrity believes Alexander-Arnold deserves great credit for the work he has put in to improve his game.

“Trent is doing really well and is moving in the right direction,” the U23s boss told Liverpoolfc.com.

“He was very good and you can see he has gone up a level in his game. I thought [against Tottenham] he showed how much he has developed in a short space of time.

“He’s been at Melwood since pre-season and he’s made a few appearances in the first-team and done well.

“Our plan was to get Trent in the right areas and for him to be adventurous because when he does that he causes people a lot of problems with his speed and his power.

“With the way he can twist and turn and the ability he has got with crossing the ball, it makes him a really good option for us in attack.

“We got him higher up the pitch in the second-half and he will cause anyone problems with the quality he has got.”

LFCTV GO: The best of the U23s win over Spurs

Garrity's side showed great spirit to fight back and beat Tottenham at the weekend, with Kevin Stewart's late Kop-end winner earning them a dramatic victory.

“Any time you come back from 2-0 down and go on to win the game shows you that the boys have got really good character and big personalities," the coach added.

“It would have been nice not to have been 2-0 down in the first instance but our second-half performance showed what we are capable of doing and that is the level we expect.

“I have always said that with the technical ability these boys have they have to match that with commitment, desire, personality and character.

“Things won’t always go their way and there’s times when you have to dig in which I thought we did against Tottenham and we were rewarded in the end.”