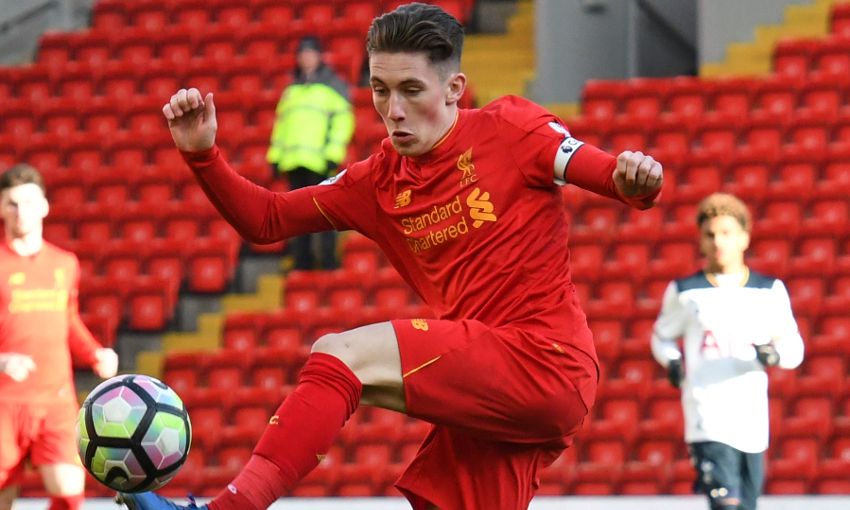 A willingness to listen to the advice of the coaches and put it into practice on the pitch is one of the key attributes that has enabled Harry Wilson to enjoy an encouraging season so far, according to U23s coach Mike Garrity.

After a 2015-16 campaign blighted by injury, the winger has been one of the standout performers for the young Reds this term.

Since being handed the U23s captaincy, Wilson has hit 22 goals and made his first-team debut during the FA Cup third-round replay win at Plymouth Argyle.

And Garrity says it has been pleasing to see the Welshman taking his game to the next level in 2016-17.

“We all know Harry is capable of getting goals and assists but it’s the other side of his game we have been getting on to him about,” he told Liverpoolfc.com.

“He is working really hard for the team and he is putting in a shift for everyone around him which is what he has to do.

“In the last six weeks or so he has been putting that into action which is really pleasing. He is in a good place.”

Liverpool sit top of Group G having recorded three wins and one draw so far and, with two games left to play, are certainties to qualify for the last 16 of the tournament.

After reaching the semi-finals of this competition last term, Garrity is hoping his team can enjoy an extended run once again.

“This is a good competition for us because it gives the lads more game time which is what they need and gives them a different challenge,” he said.

“We’ve got two away games left in the group stage so hopefully we can produce two good performances and then see where that takes us.

“It’s a good test for the lads to play at a non-league pitch in Curzon Ashton because it’s taking them out of their comfort zone and normal luxury environment. This is all part of their development as a footballer.

“Whatever competition we play there is an expectation among the players to perform and to do their best, and as coaches that’s all we can ask for."

Back on November 5, the U23s beat Huddersfield 3-0 at Prenton Park thanks to an outstanding attacking display, and the coach has been pleased with a number of other performances so far this season.

He added: “We’ve produced a lot of really good performances this season and that is testament to the boys who have played.

“We’ve got a lot of players who haven’t been in the team week in, week out, but when they have been given their chance they have done really well and performed really well.

“Our players are developing really nicely and they know they have to keep doing that and work hard, every chance they get.”