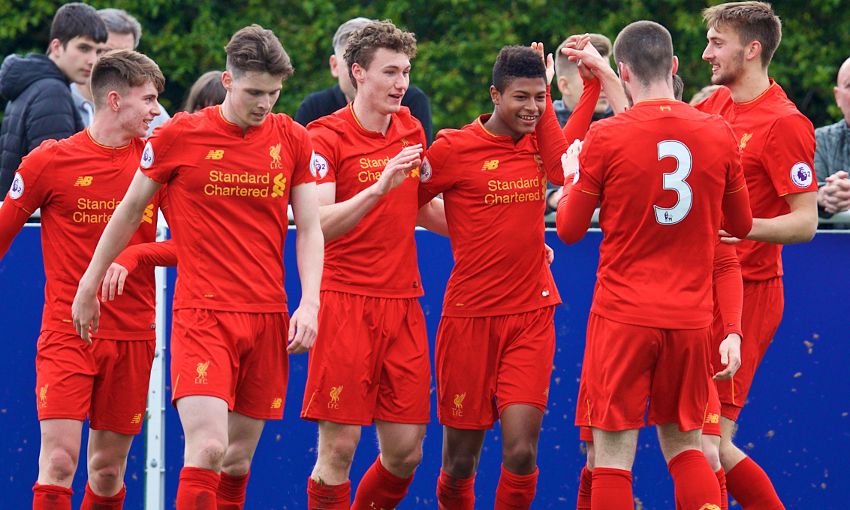 Brewster and Madger on target in U23s' friendly win

Liverpool U23s produced a second successive comeback to claim a 3-1 victory over their Leicester City counterparts on Monday afternoon.

The young Reds trailed at the interval at Holmes Park to a contentious goal converted by Josh Gordon, as the home team controlled long periods of the opening half.

As at Southampton a week ago, however, they emerged from the break a completely different side and quickfire strikes from Rhian Brewster and Matty Virtue turned the Premier League 2 game in their favour.

Harry Wilson struck a post in the search for a third goal, but the captain was not to be denied and capped off a brilliant second-half performance from Brewster’s second assist.

A slow beginning to the contest gave way to a blitz of chances after the 10-minute mark, with Alex Pascanu initially seeing a left-footed drive swerve wide of the far post.

Gordon then found himself in space on the left edge of the area to shape a curler that was deflected off target, and from the resulting corner the Leicester No.9’s thump towards the roof of the net was punched over diligently by Caoimhin Kelleher.

The hosts’ spell of pressure dissipated moments later when the young Reds launched a counter attack that was started by Brewster inside his own half.

The Liverpool striker moved the ball quickly into the sprint of Wilson, who squared to Jordan Williams, and he in turn to Ben Woodburn for a low blast that was handled carefully by the goalkeeper.

Leicester did break the deadlock on 22 minutes, though.

Having recycled the ball on the right flank, Kiernan Dewsbury-Hall’s cross to the middle caused a scramble in the penalty box with Kelleher outnumbered – and seemingly fouled – as he attempted to come out and claim.

Instead, a fortuitous bounce allowed Gordon to pounce with an instinctive prodded finish, giving the home side the lead despite the protestations of the visitors.

LFCTV GO: The best of the U23s' win over Leicester City

Buoyed by the opener, the Foxes continued to play confidently and dictate the tempo, while Mike Garrity’s Reds were struggling to reproduce the flowing football seen previously this season when the half-time interval arrived.

But it was very much on show six minutes into the second period.

Brilliant footwork from Woodburn turned a potential attack into a real breakaway opportunity and he fed the ball diagonally to Brewster, waiting at the outskirts of the Leicester box.

The 17-year-old had several options to choose from, but ultimately plumped for a shot towards the left corner that benefited from a deflection to loop over the ‘keeper and into the net.

Garrity’s charges had battled from two goals behind to draw with Southampton at St Mary’s last Monday night – and, four minutes on, they went one better here.

Trent Alexander-Arnold’s knock forward invited Brewster to exploit space on the right hand side and his near-post cross was superbly diverted past Daniel Iversen by the supporting Virtue.

The Reds maintained their ascendancy once in the lead and Wilson was twice close to a third, first seeing an effort from a short corner tipped over the bar before an excellent free-kick from distance bounced off the right post, along the goalline and away.

Leicester threatened an equaliser with 10 minutes remaining but Kelleher palmed out a blast from Raul Uche after the ball fell kindly to the substitute from a corner.

And, at the other end, Wilson put the seal on Liverpool’s comeback in sublime style in the 85th minute, running onto Brewster’s clever assist and dinking nonchalantly over the ‘keeper to ensure the win.