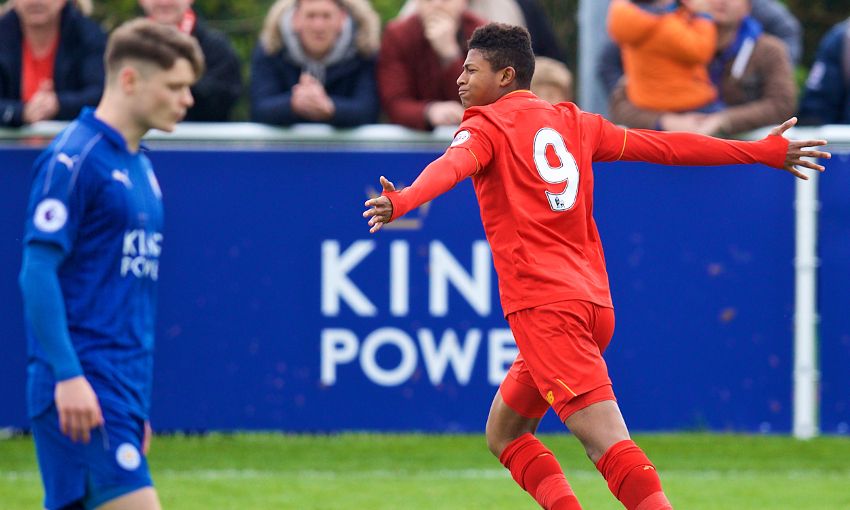 Rhian Brewster was as pleased with his two assists as the goal that kickstarted Liverpool U23s' second-half comeback at Leicester City on Monday.

The young Reds were behind at the halfway point of the Premier League 2 contest, having been unable to find any fluency in the opening 45 minutes.

That all changed after the interval and it was Brewster who started the turnaround via a deflected finish at the end of a counter attack launched by Ben Woodburn.

The 17-year-old striker then turned provider with a superb cross for Matty Virtue to put Mike Garrity’s side in front, and produced a neat reverse pass into Harry Wilson to seal a 3-1 result.

“It was a great piece of play by Ben,” Brewster told Liverpoolfc.com of his own strike.

“I haven’t scored in the league for a few games, so I thought I was due a goal. When it came to me, I thought ‘Let me have a go’. I was going to play in Trent [Alexander-Arnold], and when I scored he didn’t say anything – but I know I’m going to get a bit of stick in the changing room!

“It’s good to get goals, and also assists, it shows that I can do both.

“In the first half we couldn’t really get into the game. But the second half was much better, as it showed with three goals.

Just two competitive matches remain for the U23s this term – one in which Brewster has made remarkable progress at the Academy.

Promotion from the U18s to Garrity’s team, England youth international opportunities and even a hat-trick in a Melwood friendly have seen the young man emerge as an exciting talent.

But Brewster is not getting too far ahead of himself.

“I just needed to work hard and work my way into the U18s team,” he reflected.

“I did that, carried on playing well and played for the U18s regularly. I got the opportunity to play with the U23s. It looks like I’ve taken it and become a regular.