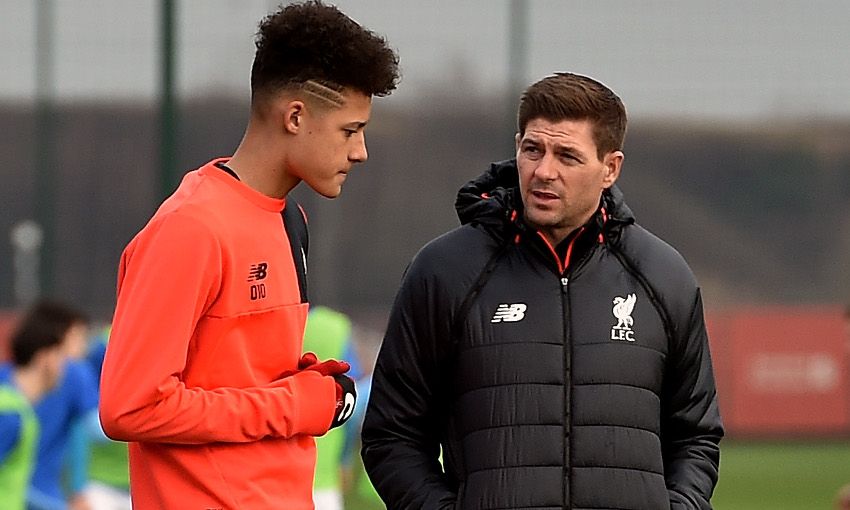 Steven Gerrard to take over as LFC's U18s manager

Steven Gerrard has revealed how advice from Jürgen Klopp convinced him that taking charge of Liverpool U18s would be the ideal next step in his fledgling coaching career.

The former Reds captain will take a leading role in the development of the club's current crop of talented youngsters from next season, replacing Neil Critchley as he steps up to take charge of the U23s.

Gerrard has been back at the Academy since February, when he accepted a position at the club’s Kirkby-based youth facility three months on from deciding to bring his trophy-laden playing career to an end.

And the 36-year-old has explained how his next move in coaching owes a lot to the guidance offered by the club's first-team manager.

He told Liverpoolfc.com: "The key thing about this is [that] it's Liverpool U18s, it's massive, but it's away from the cameras.

"I know I'm going to make loads of mistakes, that's part of the process.

"One of the things Jürgen said to me when I sat down with him [was], 'You'll make mistakes, you've got to learn from them, grow and move on - and you ideally want to do that away from cameras.'

"I think he was more excited than me as the chats progressed and, when he thought about me coming back and being manager of the 18s, he was super excited. He's been first-class.

"I'm very happy and delighted to be back working for the club, but to get the role of U18s manager, it's a big gig and I'm really excited and looking forward to it."

One thing that should help Gerrard as he adapts to life in the dugout is his intimate knowledge of what is expected of those who are lucky enough to pull on the famous red jersey.

Outlining his aims, he added: "Having a successful team - results.

"It doesn't matter what game or sport you're involved in, if you're a coach, you're going to get judged on results.

"We have to try and win and play good football because that's what's demanded at Liverpool Football Club."

Gerrard also vowed to maintain the high standards he set as a player when it comes to improving himself as a coach.

"How it is similar to being a player is [that] you get out of it what you put in," he continued. "I always had that motto when I was a player.

"If you work hard on the training pitch and you learn, and you're like a sponge, it certainly helps you as a footballer.

"If I can do that as a coach, put the hours in on the training pitch and also do my own work off it, and be around top coaches, I can only get better."