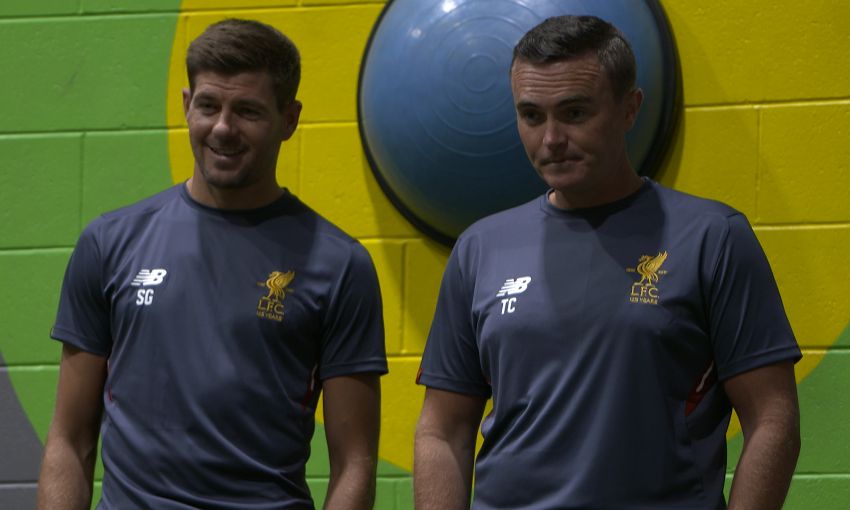 Steven Gerrard's excitement to start his spell as Liverpool U18s manager is matched by the two new members of the backroom team, Tom Culshaw and Jordan Milsom.

Having returned to the club he served for 17 years as a first-team player in an Academy coaching role back in February, the legend officially took the reins of the youth side on Monday.

Pre-season tests and assessments were the order of the day at the Kirkby base, as well as the opportunity for the re-organised management set-up to settle in with the squad.

For Culshaw and Milsom, close confidants of Gerrard who have taken up positions of assistant manager and lead fitness coach respectively, the new era is one to relish.

“We’ve been friends from childhood, our grandparents were friends and our fathers were friends. Steven and I have grown up together. We’ve known each other for a long time.

“I’ll be there to assist him. I think I can help him because I’ve worked with a lot of the group at younger ages.

“I know them really well, I know their backgrounds and where they’re from, and I know a lot of their parents. So I can help Steven settle with the group.”

LFCTV GO: Behind the scenes on Gerrard's first day

Recent seasons have been prosperous for the U18s squad, not just in terms of results and performances but in becoming a genuine springboard to Melwood.

Gerrard’s stint as an Academy coach before stepping into management will ensure that remains the case, believes Culshaw.

Milsom has switched from first-team duties at Melwood, where he worked closely with Gerrard after taking up the role of rehab fitness coach at Liverpool in 2010.

“I’m really looking forward to it,” he said.

“I’ve been at first-team level all of my career but the opportunity to come here and work with Steven, and also try to help provide the young lads who have got the dream of making it to Melwood with support and the experience I’ve had at Melwood and other places over my career. Hopefully that will stand me and them in good stead.

“It’s a new challenge, a different type of role in different surroundings. It should be fairly challenging but really exciting.

“If players are getting the opportunity to work day in, day out with Steven – the experience and everything he has achieved in his life – it’s remarkable really.

“They are in a really unique and special position. I think they’ll embrace it and use his experiences, along with other staff, to help give them the best chance of being successful.”

Gerrard’s backroom team is completed by analyst Scott Mason and goalkeeping coach Neil Edwards as they prepare for the upcoming season.

For Milsom, the personal objective each day will be to help the players express their talents by spending as much time as possible on the pitch.

“This week isn’t too much of an extensive week; we’re looking to try to peak further on down pre-season and keep them all healthy and available, which is the most important thing,” he said.

“They’ll only develop if they’re able to train and play every day. They won’t be developing if they’re in the treatment room for too long.

“The idea is to keep them healthy and give them the best chance of giving Steven headaches when it comes to picking sides.”