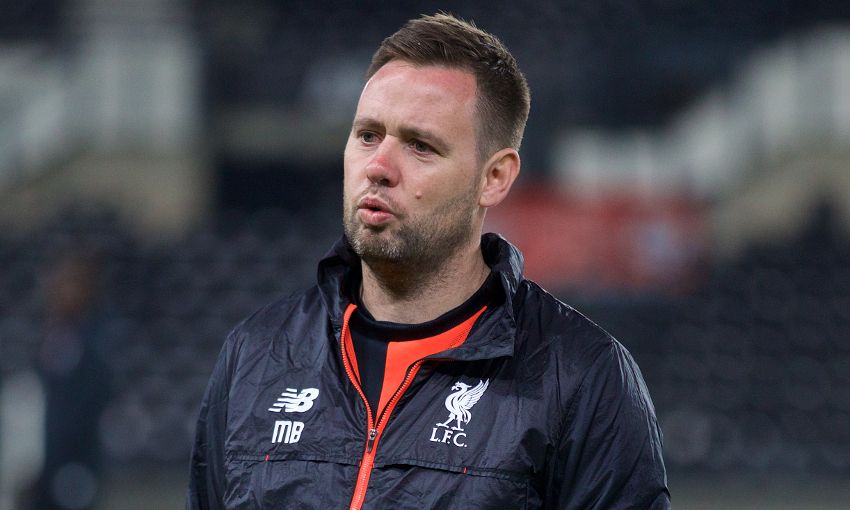 Michael Beale has spoken of his joy at returning to a 'very special football club' as he takes up a new role at Liverpool's Academy: head of coaching for the foundation phase.

The former U23s boss, who left the club in December 2016 for a new challenge as assistant manager of Sao Paulo in Brazil, is now back in Kirkby and eager to implement his own ideas in a new youth development position.

In an exclusive chat following his comeback this week, Beale explained to Liverpoolfc.com why he has returned to the Academy and what he hopes to achieve in the future.

Watch the video below to see what he had to say, or read on for a full transcript.

Michael, welcome back to the Academy. How does it feel to be at the club again?

It feels great to be back. I never really cut the cord because I was always in touch with the staff, the players and watching our games when I was living out in Brazil. I’ve got lots and lots of good friends here in Kirkby and at Melwood as well, so it’s lovely to be home.

It was a bit of a wrench for you to leave the club in the first place, so how did the opportunity to return arise?

[It was] interesting really. I was back home after resigning from Sao Paulo and I was offered a couple of manager’s jobs overseas. I came to the Academy for some advice really on maybe what I should or shouldn’t do, and I then decided not to do anything maybe until the New Year. Then the opportunity came up to do this role, and putting together a lot of the thoughts I was having in Brazil and the fact that wanting to come back to Liverpool in some capacity was always my desire, it’s brilliant the way it has worked out really.

It’s fantastic to be back and it feels like I haven’t left the place. It just feels like I’m back home at a special place with a lot of good friends and I hope to play a small part in what we are trying to do.

You had the experience of a new country, a new culture of football in Brazil with Sao Paulo. What was that experience like?

It’s a huge club in that part of the world. It was a fantastic experience in learning about players, learning about South American players. A lot of exciting players come from that part of the world, we have it with the likes of Philippe Coutinho and Roberto Firmino. To go and see where they come from and how they see football was a real joy for me. The weather and the climate was really nice, but being a youth developer it is fantastic for me to be back at the Academy and coaching the young players.

Head of coaching for the foundation phase, what does that entail?

We have about six people full-time in that range; firstly, getting boys aged five, six, seven and eight into the Academy and then the coaching in that department for players aged between nine and U12 is the hard drive when you put all the techniques in. It’s a really exciting age group. If you look back at the likes of Cameron Brannagan, Connor Randall, Ben Woodburn, Ryan Kent, Harry Wilson and Trent Alexander-Arnold, they have made that full journey. With me having worked with all those boys you think how can we go back and put some more good work into these young players and build the club for the future. It’s something I have great experience in as I did it in a previous role with Chelsea. Living in Brazil and seeing how they go about it, it’s something I was really interested in. When Alex [Inglethorpe] put this role to me it was a no-brainer really to come in and help in that area of the club.

I will be head of coaching from the U5 to U11 phase, Nick will take the secondary age groups from the age of U12 to U16 and Alex will take the full-time players. What we will do is just support the coaches and make sure the programme is what we want it to look like. The job will lead to me working across many of the age groups but that’s my sole responsibility now and it’s one I am really looking forward to.

You also get to travel overseas from time to time in this role, don’t you?

It’s a role that will take me around the country and beyond. I want to make sure that I get overseas and make sure I can see what other people are doing around the world in that age group, just to make sure we are at the forefront of what is going on. We are a world-class football club, but with that the game changes and we want to make sure we are at the forefront of youth development. We have shown that in recent times and it’s important we go out and see what they are doing in Holland, Germany and the rest of the world, and see how we can implement that into our academy here. It’s not a case of changing anything but adding to it.

You will also be looking to implement your own style to the role won’t you?

Absolutely. Skill coaching is massive and what I mean by that is teaching young players how to twist and turn, how to dribble, how to stay on the ball, what we can do in individual possession. It’s an area that me and our first-team development coach, Pepijn Lijnders, are known for and it’s important for me to use some of Pep’s expertise. I’m a youth developer, I wasn’t ready and I’m not ready now to just go and work with first-team players. I love youth development and there’s no other club I would rather be doing that than here at Liverpool.