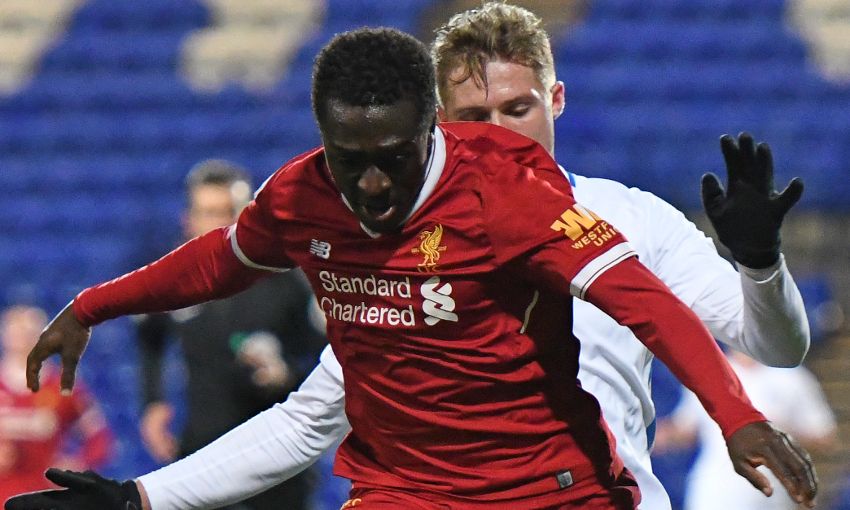 Liverpool U23s were hit by a late sucker punch as they suffered a 1-0 defeat to Sparta Prague in the Premier League International Cup on Tuesday evening.

The Reds bossed large periods of play at Prenton Park but failed to convert their best chance of the match when Harry Wilson sent a penalty wide in the first half.

It looked like the game would end honours even when Sparta missed a spot-kick off their own late in the second period but Srdan Placsic, the man thwarted by Danny Ward, made amends five minutes from time.

Liverpool will now need to beat PSV Eindhoven in their final group game next month to stand a chance of progressing to the next round.

With the U23s playing their second of three games in an eight-day period, Neil Critchley opted to make a number of changes.

That meant a move to an unfamiliar three-at-the-back formation and a rest for striker Rhian Brewster, while Ward was introduced to the starting line-up in goal.

Perhaps due to the change in shape, the hosts made a slow start to proceedings.

It took until the 19th minute for the either side to go close, with Ben Woodburn clipping the crossbar from a brilliant 25-yard free-kick, but that effort seemed to bring the game to life.

Sparta Prague shook the woodwork themselves shortly after through Lukas Julis, who arguably should have done better with so much of the goal to aim at.

LFCTV GO: Extended highlights from the clash with Sparta Prague

Wilson then saw the ball pinched off his toes in winding up for a finish inside the box - though he would have an even better chance just before the break.

A quick one-two with Danny Ings allowed Bobby Adenkanye to burst into the visitors' box, where he was tripped by Eldar Civic, but Wilson could only clip the outside of the post with his penalty attempt after sending the 'keeper the wrong way.

Liverpool continued to have the best of the game in the second period, with Yan Dhanda firing a powerful effort just wide inside the first five minutes and Wilson seeing a curling attempt headed off the line soon after.

Critchley looked to help his side turn the screw in the final 20 minutes, introducing both Brewster and Matty Virtue from the substitute's bench.

But it looked like a rare foray forward from Sparta might prove the difference in the end when Conor Masterson tripped Youssouf Dao in the box with time ticking away.

Ward had other ideas, and produced a brilliant penalty stop from Placsic to keep the scores level at Prenton Park.

The young forward had his moment five minutes from time, though, sending a deflected effort beyond the Reds 'keeper to clinch all three points for the visitors.