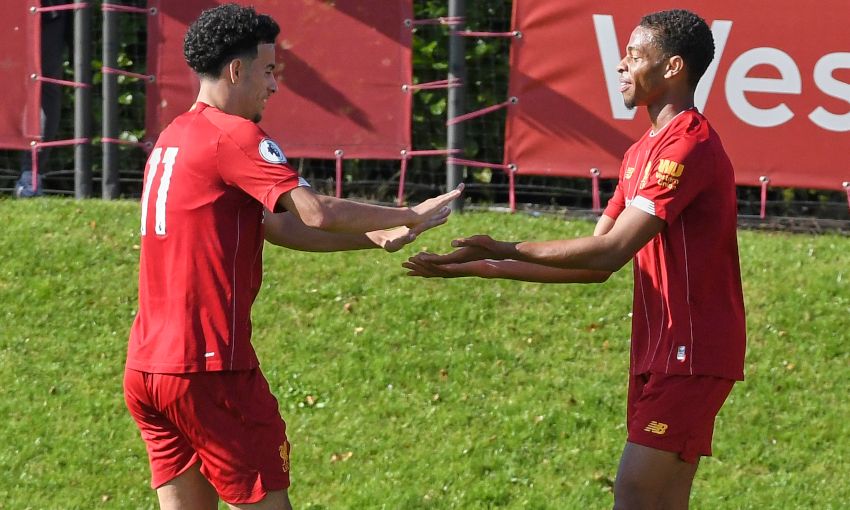 Liverpool U23s played out a thrilling 3-3 draw with Derby County in Premier League 2 at the Academy on Saturday afternoon.

Elijah Dixon-Bonner and Curtis Jones added to an own goal for the Reds, while Ben Winterbottom also saved a penalty.

Rhian Brewster departed the field early as a precaution due to Divock Origi picking up an injury earlier on in the day for the first team.

With Dutch duo Ki-Jana Hoever and Sepp van den Berg pairing up at centre-back once again, Neil Critchley’s side started brightly and took an early lead.

Jones fed a lovely pass into the path of Dixon-Bonner, who drove forward and finished superbly.

The away side, who included former Academy graduate Andre Wisdom, were then awarded a penalty kick but Winterbottom, making his Premier League 2 debut, produced a brilliant stop to deny Morgan Whittaker.

The young Rams were always a threat on the counter-attack, though, and they were soon level when a fine run by Louie Sibley found Max Bird to make it 1-1.

The Reds started brightly after the restart. The influential Jones drove at the Derby defence down the left and his inviting cross was narrowly missed by Van den Berg. The ball then fell kindly to Pedro Chirivella, who was unlucky to see his fierce effort hit the underside of the bar and stay out.

At the other end, Winterbottom made an unbelievable double save at point-blank range. Jayden Mitchell-Lawson broke free down the right flank and found Sibley - but his first strike was saved and the rebound was denied too.

Derby then took the lead on 58 minutes when Whittaker got clear and saw his shot just beat the outstretched hand of Winterbottom.

The Reds got level on 64 minutes and it was no surprise that it came through the creativity of Jones.

The U23s skipper got into space and delivered a cross which found Harvey Elliott at the back post, and his header was then turned into his own net by the unfortunate Jordan Brown.

Two minutes later, Jones almost put his side in front. Elliott’s right-wing cross was brilliantly hooked back into the danger zone by Chirivella and Jones sent his header inches over the bar.

The Reds were looking a real threat every time they broke into the Derby half.

A delightful touch by Luis Longstaff put Neco Williams away down the right. The Wales U19 international found the unmarked Herbie Kane but his attempt came back off the post.

The pressure eventually told on 80 minutes as Jones pounced to make it 3-2. A clever reverse pass from Longstaff released Elliott along the flank and his inviting low centre was turned home at the back post by the captain.

Six minutes from time, however, there was more penalty drama as Josh Shonibare went down under a challenge from Van den Berg.

The contact appeared minimal but the referee pointed to the spot, and this time Jahmal Hector-Ingram took responsibility and slotted the ball past Winterbottom for 3-3.

With time almost up, Liverpool had a strong claim for a spot-kick themselves but appeals were waved away after Williams played a superb ball into the box and Jones went down under a challenge.

Reflecting on an eventful 90 minutes, Critchley told Liverpoolfc.com: “I don’t think you could fault the attitude or the character of the players today in what was an eventful game to say the least.

“Curtis was a real handful for us. He is an outstanding young player when he is in the right frame of mind and today he was.

“His running off the ball and his work-rate was exceptional and I said to him at half-time, ‘You can win us this game’. And I thought he had when he scored to make it 3-2, a fantastic goal.

“I don’t like speaking about referees and I don’t like using them as an excuse but I thought both Derby penalties were debatable, particularly their second one, which I thought was extremely harsh.

“Right at the end, for me, we had a stonewall penalty at the end when Curtis was brought down. He was clipped and he went down but it wasn’t given.

“That would have possibly won us the game, which I felt the lads’ effort would have deserved today.”