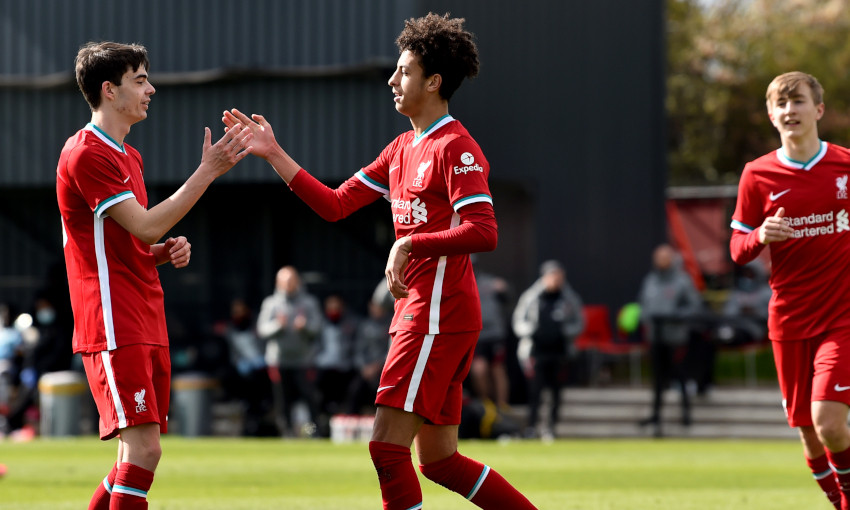 Liverpool U18s wrapped up their 2020-21 schedule with a 4-1 defeat of Tottenham Hotspur at the Academy on Saturday afternoon.

Jarell Quansah, Kaide Gordon, James Norris (penalty) and Tyler Morton were on target for the young Reds in Kirkby to sign off their season in style.

It was an action-packed final outing of 2020-21 for Marc Bridge-Wilkinson’s side as they looked to shake off the disappointment of losing the FA Youth Cup final on Monday night.

After Fabian Mrozek kept Spurs out with an excellent, point-blank save just two minutes in, Liverpool found their groove and fashioned a series of chances.

Max Woltman firstly fired into the side-netting having cutely turned on Melkamu Frauendorf’s pass into the box, before the forward struck the post with a low drive from the edge of the area.

Tottenham took a 13th-minute lead from the penalty spot, however, when Quansah’s tackle on the stretch was judged a foul despite his protestations.

The Reds rallied and were repeatedly foiled by the visiting goalkeeper until they found a way through eight minutes before the interval.

Morton’s corner kick from the left-hand side was met by Quansah at the near post and the centre-back headed home to make it 1-1.

The hosts might have snuck in front at half-time, too, as Norris’ outstanding cross-field pass invited Gordon to attack the goal from the right, but he curled just wide after cutting inside.

Gordon was also denied from 12 yards, the Spurs ‘keeper making a brilliant save from his penalty after the attacker’s dribble was halted by a foul.

The theme continued into the second half as Gordon was thwarted by the Tottenham stopper after breaking clear through on goal.

But neither he nor Liverpool gave it up.

On 65 minutes, Mateusz Musialowski – on as part of a rolling substitution policy – picked out Gordon, who again moved in off the flank and this time dispatched his finish into the opposite corner.

Next, he won a second penalty of the afternoon for the Reds as he was brought down in the area; Norris assumed responsibility of the kick and converted for 3-1.

And Morton then put the seal on the match and the season, scoring from a free-kick at the edge of the box in the 87th minute to confirm an impressive result.