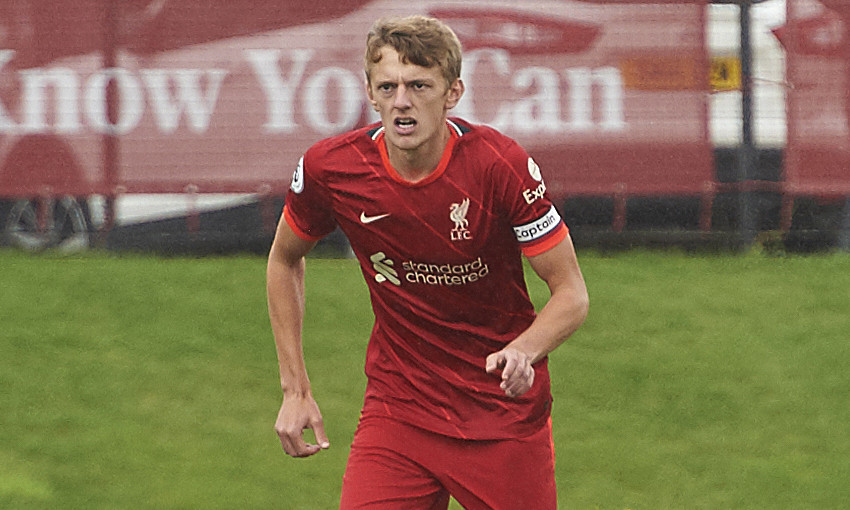 Barry Lewtas has singled out the qualities of Tom Clayton for his high level of consistency and leadership on and off the pitch.

The Scotland U21 international was one of the standout performers last weekend as he captained a youthful Liverpool U23s side, who held an experienced Manchester City outfit to a goalless draw in their Premier League 2 opener.

Lewtas’ charges are back in action in the division tonight when they face Everton in the mini-derby at Southport FC’s Pure Stadium.

Clayton is sure to feature in the 7pm BST kick-off, and the U23s boss is a real admirer of the 20-year-old’s talents.

“You sometimes pass words on when you mention Tom about consistency, how reliable he is and how versatile he is, but in fairness to him he has quality as well,” Lewtas told Liverpoolfc.com.

“When he played in midfield for us last season I thought he did that job fantastically well.

“He got a Scotland U21 call-up on the back of those performances and made his debut for them as a No.6.

“On top of his consistency and versatile tags, Tom also has a lot of quality, which we saw against Manchester City because I thought he and Billy Koumetio marshalled the backline ever so well.

“Tom is a leader for us. Although all the lads are so young, Tom is one of the most experienced ones so he adds a bit of maturity to the group.

“He helps the development of other players as well as his own because he is a real team player and he’s someone who is great to have around and he’s a really important player for us.”

This is a very competitive league and I found that out at first hand last season. But obviously the Everton games are the two that we most look forward to. The players are excited about it and I don’t think the two games we played against them last year disappointed. We had a narrow-margin 1-0 win against them on the opening day of the season and then we had a 1-1 draw at Southport when I thought we played very well that night. We are hoping we can play well on Monday night and get the right result.

On the importance of a derby game at any level…

It is a small league in terms of numbers but the teams in it are all top academies. All the games are competitive and all have something on it but Everton against Liverpool is a huge game. It’s a derby and a lot of the players have grown up playing against each other at a local rivalry. It’s definitely a game that all the players and all the staff are excited for.

On Clarkson’s season-long loan to Blackburn…

It’s a fantastic move for Leighton. I was joking with Leighton the other day because he’s a Blackburn lad and his family are Blackburn fans, so I said it’s only taken them 13 years and they’ve finally got their man! It’s his first loan move and Blackburn are a big club in the Championship, and the move is a testament to how well he’s done over the last couple of years. We are all really excited for him and I’m sure he will go there and do ever so well. Last season Harvey Ellliott did so well at Blackburn so hopefully Leighton can have a real positive experience.

The lads did really well. We knew City would be strong and I thought in terms of the balance of the game there were certain parts of it which I was really pleased with. I thought we dealt with periods of pressure really well and we had some good moments ourselves. We created some opportunities to score, a really good one with Mateusz Musialowski at the start of the second half, so there were lots of positives to take from it. It was a positive start. We know there’s plenty more to come and plenty more improvement to make. I’ve said to the boys if that’s our baseline then that’s something to really build on and hopefully it’s an exciting season.