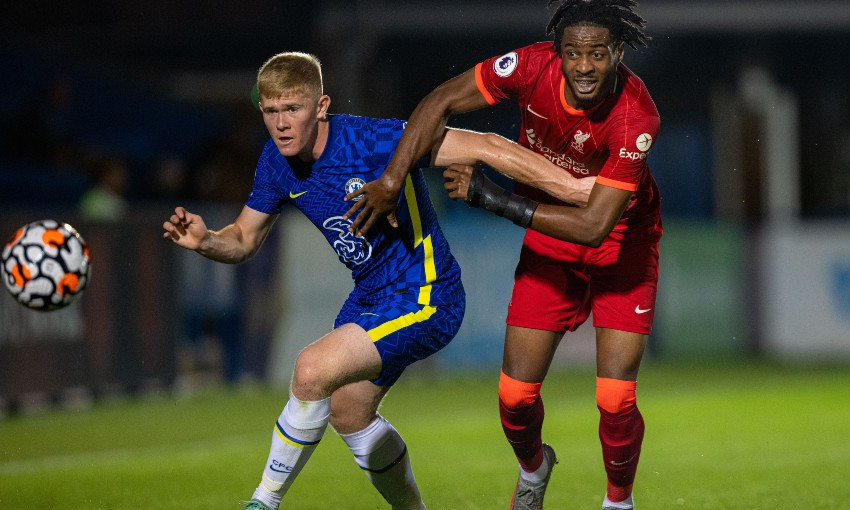 A goal deep into stoppage time condemned Liverpool U23s to a 4-3 defeat by Chelsea in Premier League 2.

Owen Beck’s early strike put the young Reds ahead at Kingsmeadow on Friday night, but Bryan Fiabema pulled Chelsea level in the late stages of the first half.

Mateusz Musialowski then scored twice in the space of three minutes amid a strong start to the second period by Barry Lewtas’ side.

But Chelsea pulled one back through George Nunn, before Joe Haigh equalised and Lewis Hall headed in a 95th-minute winner to complete the turnaround. 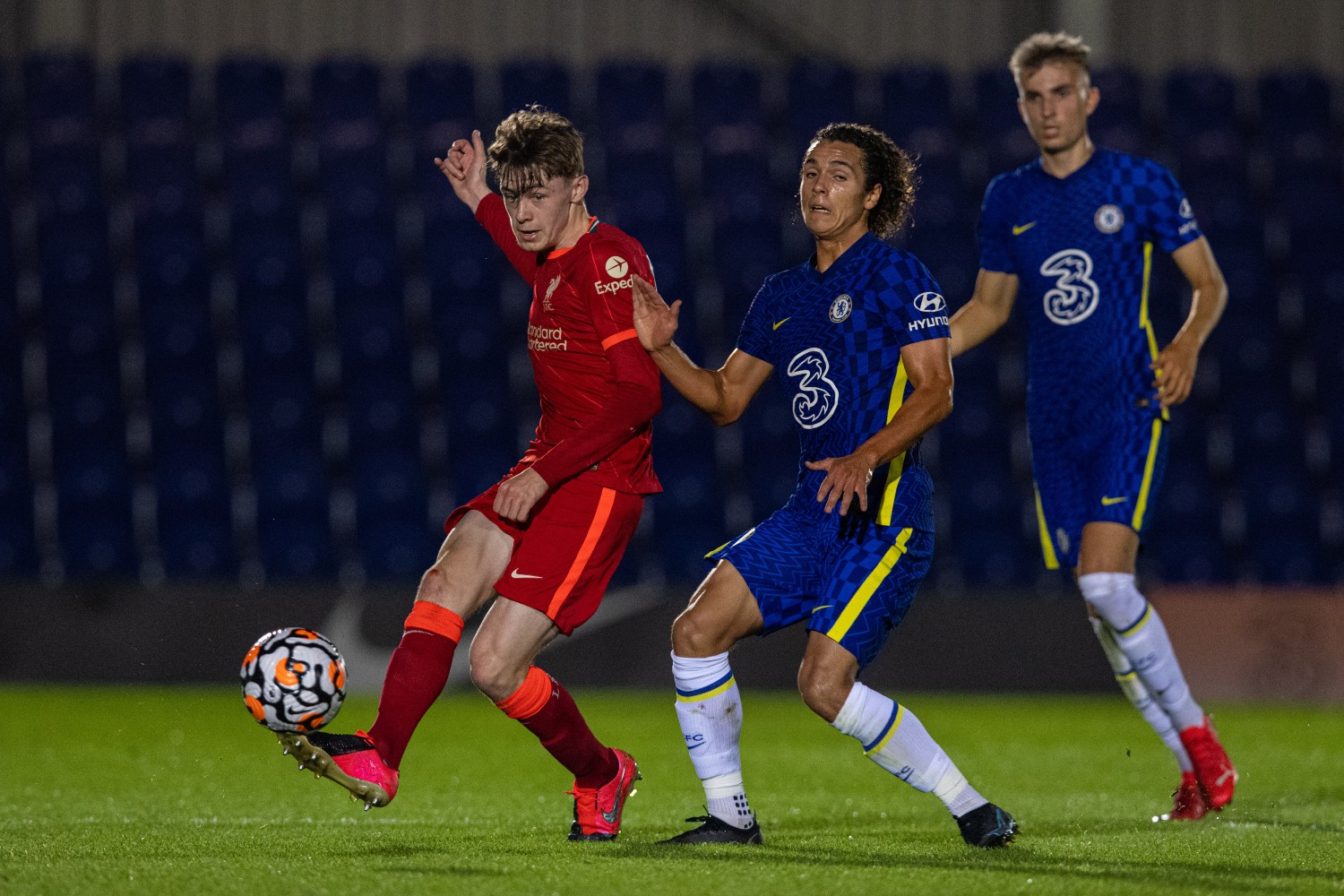 Having made his first-team debut on Tuesday, Conor Bradley nearly marked his return to U23s action in some style inside the opening two minutes.

The Northern Ireland international surged forward from right-back, bursting into the penalty area and stretching to toe-poke past Chelsea goalkeeper Teddy Sharman-Lowe, only for Xavier Simons to get back and clear off the line.

Liverpool’s early energy and enterprise was soon rewarded through their other full-back, though.

Showing similar intent to Bradley, Beck drove in-field, bustled his way beyond several defenders and blasted an unstoppable hit into the far corner.

Another youngster who made their senior bow in the win over Norwich City, Tyler Morton, then went close, the midfielder seeing an effort from distance tipped behind by Sharman-Lowe.

The visitors’ control of the first 15 minutes was almost absolute, although Marcelo Pitaluga had to produce an excellent reaction save with his legs to deny Lewis Baker at the end of a rare Chelsea attack.

Lewtas’ team remained on top but Chelsea punished their failure to add to Beck’s opener four minutes before the break when Nunn’s cut-back found Fiabema, who drilled home the equaliser.

Liverpool shook off that setback at the interval and began the second half in the ascendancy, with their dominance duly showing thanks to a couple of fine, quickfire finishes from Musialowski.

The 17-year-old’s first goal at Premier League 2 level was a left-footed drive from range that found the bottom corner following another adventurous run forward from Bradley.

Just three minutes later, Musialowski got his second. James Norris won the ball back on halfway and fed Max Woltman who in turn found Musialowski, with the Pole this time clinically slotting in with his right foot. 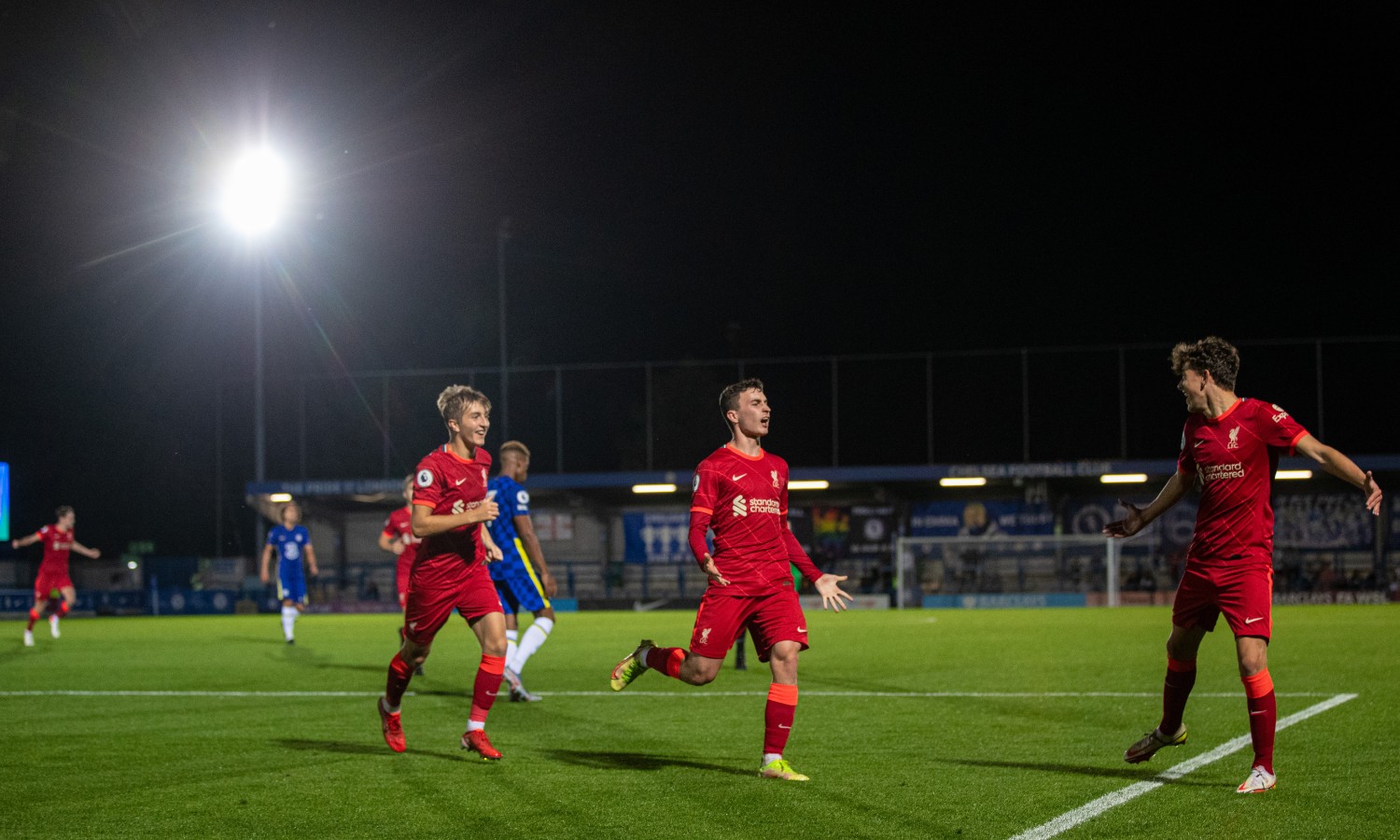 However, Chelsea reacted strongly and had hauled themselves back on terms by the 74th minute thanks to a back-post header from Nunn and substitute Haigh, who capitalised on Tom Clayton’s miscued clearance before beating Pitaluga.

And, after Sharman-Lowe had tipped Woltman’s powerful attempt from a tight angle over, there was to be late, late drama at the other end, as Hall nodded in Simons’ deep cross.