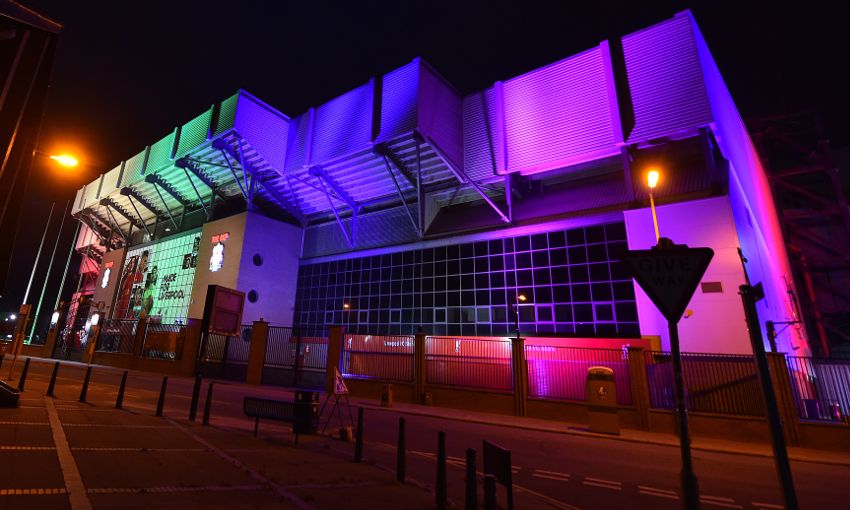 Liverpool FC is proud to support Liverpool Pride 2016 and to mark the week-long celebrations, Anfield's famous Kop is this week lit up every night in the colours of the LGBT (lesbian, gay, bisexual, transgender) rainbow flag until Sunday July 31.

In 2012, the Reds became the first Premier League club to support a UK Pride march.

The installation of the special colours on the Kop this week will form part of Liverpool Pride’s ‘Come out of the Shadows’ initiative, which will see prominent buildings across the Liverpool City region light up each night using colours from the iconic LGBT rainbow flag.

Come Out of the Shadows is a new three-year initiative spanning Liverpool city region, which will allow the organisers of the all new Liverpool Pride to set out their stall in their bid to become the most visibly LGBT friendly city in the UK.

LFC staff across the city’s retail stores and Anfield ticket office also will don colourful and creative clothing to show the club’s support for ‘Dress with Pride’ – an initiative to help raise awareness of the city’s LGBT communities and Liverpool Pride Festival 2016.

On Saturday July 31 LFC representatives will a march alongside the LGBT community in a celebration of the culture of the city.

The event promises to be one of the city's most flamboyant occasions of the summer, with the march beginning and ending at St George's Hall. This years’ theme is Liverpool Icons, which was suggested in tribute after the death of singer, tv personality and Liverpool fan Cilla Black.

LFC supports city’s Pride celebrations with a host of activity