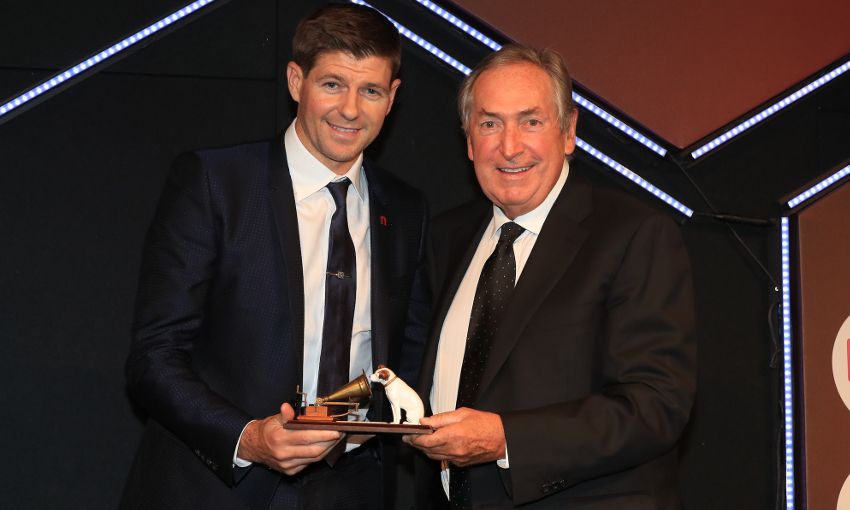 Steven Gerrard's career achievements were celebrated at a special Legends of Football event in London on Monday night.

The Liverpool icon was presented with the Legend of Football Award for 2017, following in the footsteps of world football luminaries such as fellow Reds hero Kenny Dalglish, Brazil superstar Pele, Sir Stanley Matthews, and many more.

Gerrard received the accolade from a former manager, Gerard Houllier, who oversaw the early stages of the Scouser’s career – including his senior debut – and later handed him the captain’s armband.

As well as honouring the man who lifted seven major trophies across his 17 years and 710 appearances in the Liverpool first team, the event raised crucial funds for music therapy charity Nordoff Robbins.

Gerrard said: “I’ve lived the dream. My dream was to play for Liverpool and be the captain.

“It’s based around me tonight, which I’m very humbled and appreciative of, but the charity are the main winners. The most important thing is to remember the charity we’re here for, to support Nordoff Robbins – an excellent charity where a lot of music and sport people come together.”

The largest independent charity of its kind in the United Kingdom, Nordoff Robbins supports thousands of people through its dedication to changing the lives of the vulnerable and isolated.

Music therapy can be used to support individuals with a range of needs, such as helping a child with autism to communicate, unlocking forgotten memories for those living with dementia or providing comfort to someone facing a terminal illness.

A charity auction was held at the Legends of Football ceremony at the Grosvenor House Hotel and helped towards the remarkable total of funds raised, £435,276, on behalf of Nordoff Robbins.

Former teammates including Xabi Alonso, Jamie Carragher, Sami Hyypia and Gary McAllister were among the hundreds of guests in attendance to pay tribute to Gerrard on the night.

“We had so many experiences together, so many highs and a few lows as well,” said Alonso. “He deserves this kind of award, he’s a true legend of the game – that’s why he is so praised and we appreciate him so much.”