LFC to wear poppies with pride on Remembrance Sunday

Supporters who are travelling to Anfield for Liverpool's game against Fulham on Sunday should be aware that road closures will be in place around the Liverpool Lime Street Station area.

Road closures are part of the city’s Service of Remembrance, which will be taking place outside St George’s Hall from 10.30am GMT.

As a result, football bus services, the 917 Stagecoach service and Taxibus Taxi1 will depart from the Victoria Street bus stop VE, adjacent to the Shankly Hotel, ahead of the 12pm kick-off at Anfield. Post-match, services will resume as normal. 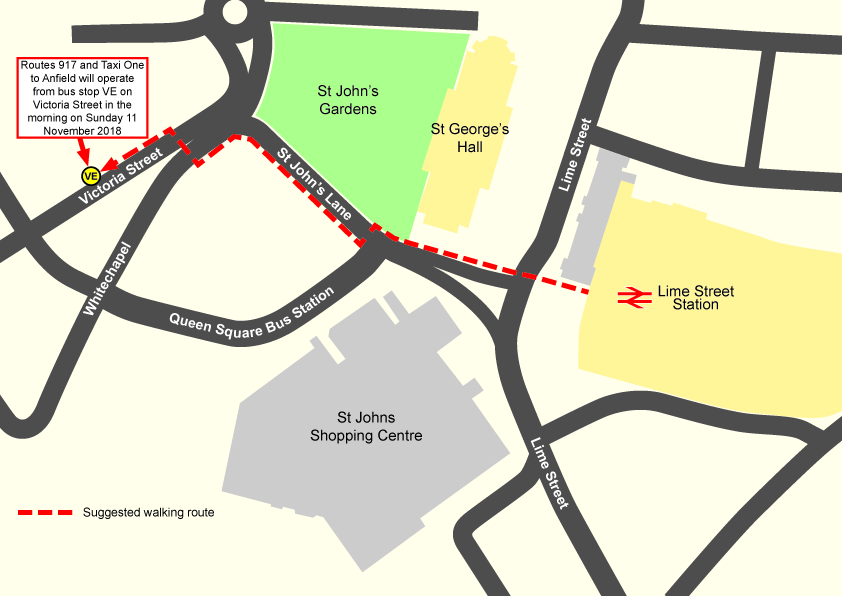 In order to facilitate the city’s Remembrance of Service, the following road closures will be in place on Sunday:

Queens Square Bus Station will also be closed from 9.30am to 1pm. For further details on affected bus services and routes, visit www.merseytravel.gov.uk.

Please be aware that services will extremely busy. We ask that fans plan their journey in advance and allow plenty time to travel. LFC's Fan support team will be on hand at Liverpool Lime Street Station and Victoria Street bus stop should you require any assistance.

Liverpool FC will observe a two-minute silence at 11am, with stadium operations falling to a standstill as the Cenotaph service in London is broadcast live on the screens around the stadium.

Stadium flags will fly at half-mast throughout the day in honour of the fallen and the players of both teams will also observe a minute since ahead of kick-off at 12pm.