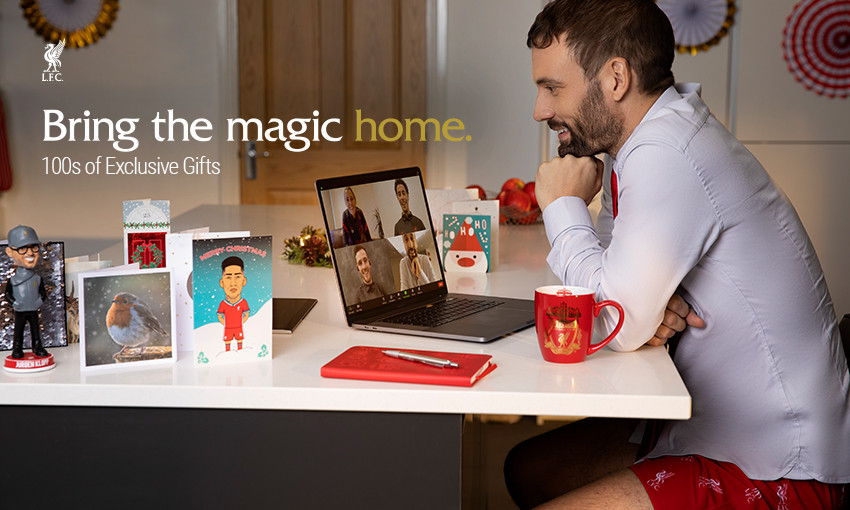 Liverpool FC is already getting in the festive spirit with the release of this year's Christmas advert - but 2020 will see the launch of not just one video, but a hat-trick of them!

Spelling the start of the festive season, each of the three videos tells a separate story showing what the club means to its supporters, while celebrating the magic of Christmas with plenty of special effects, humour and feel-good moments throughout.

The first video, which is available to watch today, features a cameo from actor and lifelong LFC fan Nick Blood, particularly known for his role as Lance Hunter in Marvel's Agents of S.H.I.E.L.D.

The video captures a scenario many fans will be familiar with due to the ongoing pandemic, with the new norm of working from home and conducting meetings virtually via video calls.

While Nick is engaged in a video call with colleagues, a few well-known faces distract his attention, suddenly springing to life from his kitchen table - as you can see at www.liverpoolfc.com/christmas.

On appearing in this year's Christmas campaign, he said: "One day I'll be telling my kids stories about us lifting the European Cup and the Premier League, just like my dad did me. I'll also be telling them about the time their old fella did a commercial for LFC.

"My dream job for Liverpool would have been on the pitch. That was never going to happen (unless they're looking for an overgrown ball boy) but this was the next best thing. I also got to keep the boxer shorts so it was a win-win for me.

"Rarely does a job come along that combines two of your favourite things. In this case it did - Liverpool and Christmas - so I was chuffed to be part of it."

Each Christmas video will be revealed separately over the festive period and comes as part of the club's Christmas campaign message, 'Bring the magic home' - highlighting the closeness and togetherness of the club and supporters, particularly at Christmas and during what has been a difficult year for many. LFC hopes the 'magic' in the videos will bring a smile to everyone's face and help make this Christmas a really magical one.

LFC has also revealed its official Christmas gifting range with a selection of exclusive presents for every Reds fan.

The range includes hundreds of exclusive LFC gifts for men, women, kids and babies and is available online now.

It won't be hard to find the perfect present for any Red this year, with products such as the new Premier League Champions range launched for Christmas, Christmas pyjamas for the whole family, watches and jewellery, winter fashion and Christmas decorations to choose from.