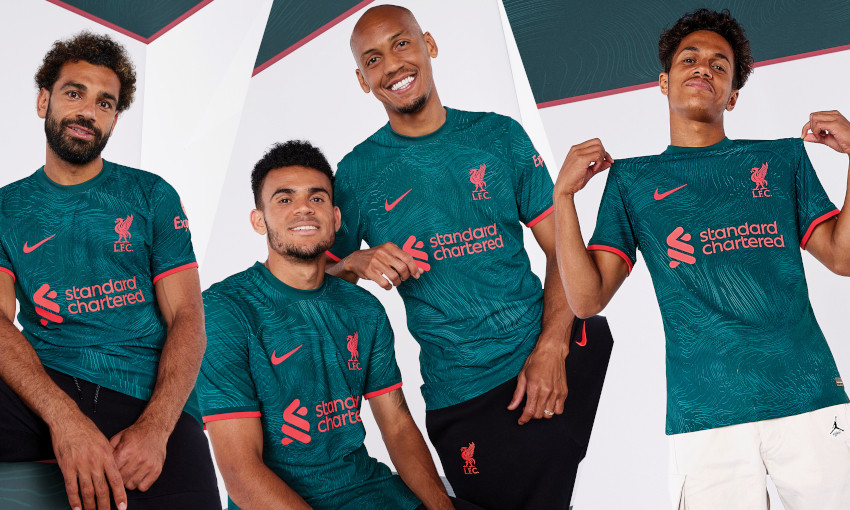 Liverpool FC has introduced the third and final kit for the 2022-23 season with a celebration of the famous flags and banners that have travelled with fans across Europe for decades.

The club’s change kits have long been linked to European competitions and with the Champions League group stage set to begin this week, LFC has taken the opportunity to salute the supporter tradition that’s a huge part of its rich European history and success.

The club has also commissioned a custom-made banner by fan and flag-maker Mark Sweatman, which features 97 stars, each one representing an away victory or trophy win for the Reds in Europe and their locations.

It takes centre stage in the new video that reveals this season’s third kit, with its colourway a blend of dark atomic teal and rio teal, with siren red sleeve cuff, club crest and partner logos.

The launch video was filmed at the Olympia in Liverpool, an iconic venue post-European matches, and the soundtrack is supplied by local Liverpool band and Reds fans The Cheap Thrills. Some of the song’s lyrics also feature on the new LFC custom-made flag.

The reverse of the jersey features the 97 emblem encased by the Eternal Flames sitting proudly at the nape of the neck in memory of the children, women and men who lost their lives at Hillsborough.

When worn in European competition the jersey will include the ‘Side by Side’ logo on the reverse, marking the partnership between LFC Foundation and Right to Play. Working ‘Side by Side’ they use the power of sport and play to help vulnerable children in Bangkok and Senegal, so they can learn, lead and succeed. More information on the award-winning programme is available here.

The ‘Side by Side’ patch can also be purchased for £5 and printed on the shirt, with all proceeds donated to support the programme.

Plastic bottles are collected, cleaned and melted down to produce a high-quality yarn for manufacturing, as part of Nike’s wider Move to Zero initiative, with football apparel leading the way in sustainability, and in line with LFC’s The Red Way initiative.

For this season, a new LFC name and number style has been introduced for the back of shirt, which takes inspiration from the city, with a contemporary take on Liverpool’s historic street signs. The product is printed with water-based inks as a more sustainable option and will be worn for cup competitions and friendlies. The third kit lettering is white with a siren red outline. 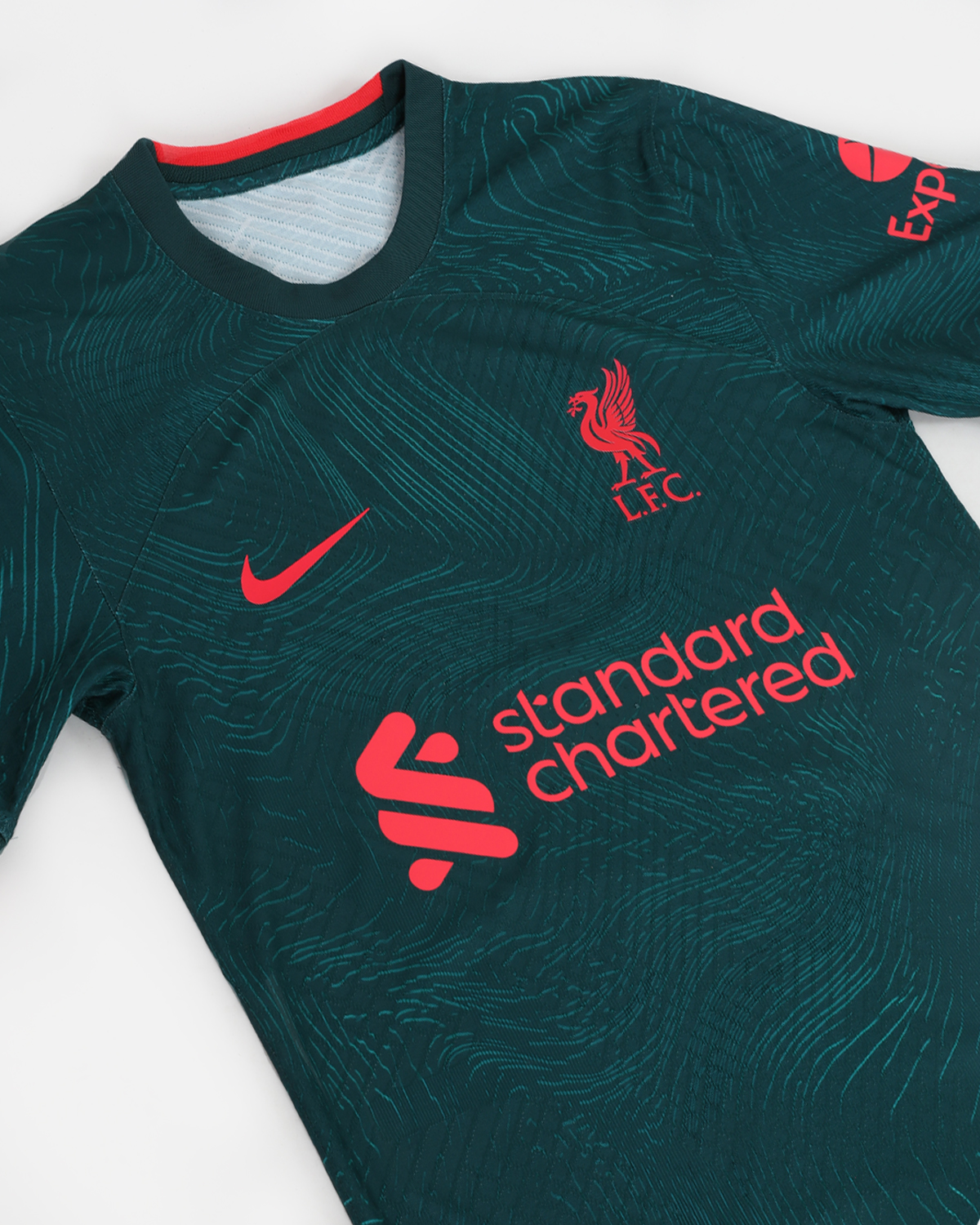 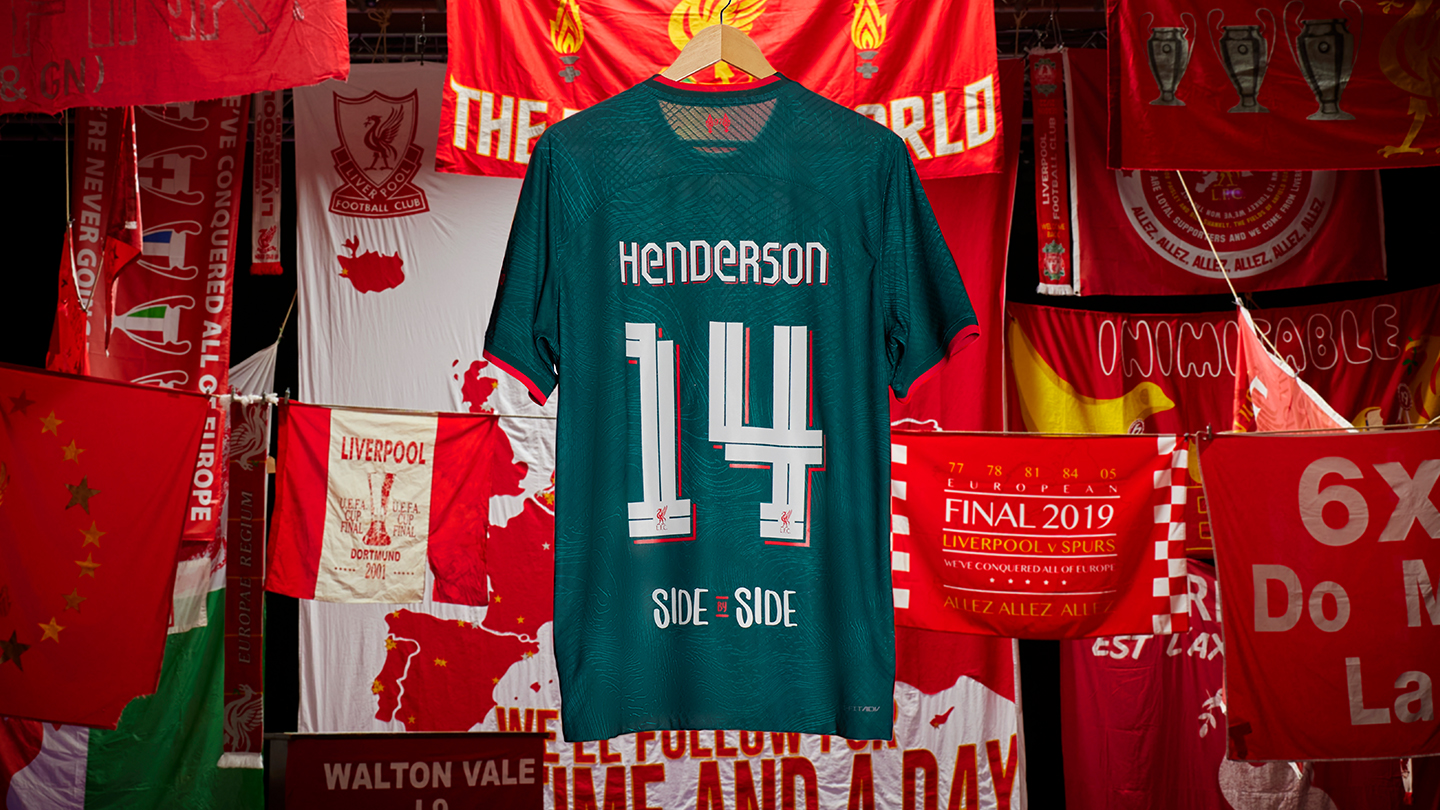 The 2022-23 third kit is available in men’s, women’s and junior sizes, and in a match and stadium version.

Prices have been frozen and, as with previous seasons, the club is offering a 10 per cent discount off the price of the third shirt to all LFC Official Members and season ticket holders. This is also available for UK key workers via Blue Light and Network. More information on eligibility and how to redeem the discount can be found here. UK and US students can also receive 10 per cent discount via Student Beans. Redemption information can be found here.

Out now: LFC's new away kit, training and lifestyle range