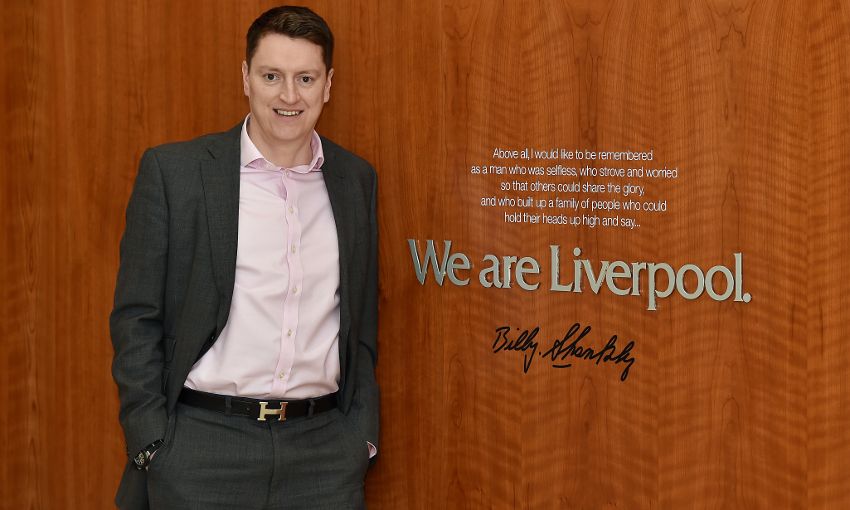 Behind the Badge: 'My work at the Academy is incredibly rewarding'

“One minute you could be sorting out a private jet for a player, the next minute you’re dealing with an issue with a local taxi firm, for example. It varies so much and that’s the great thing about the job – every day is different.”

In his role as Liverpool FC’s head of travel since 2015, Holliday’s duties have been many and major, including the organisation behind every journey taken by the Reds’ first team and backroom staff as well as the day-to-day business needs of club employees.

The appointment 18 months ago came as ‘a natural fit’ for a man who, with no small nod to nominative determinism, has been drawn towards the profession from a young age.

After gaining a degree in travel management, he worked for more than a decade-and-a-half in the industry with agencies contracted by Premier League teams – such as the Reds – to plan trips on their behalf.

Now the Carlisle United supporter is at the helm of an in-house department tasked with providing efficient movement for those working at the club, not least Jürgen Klopp’s team.

“I managed to get into the field right at the beginning and, 16 years on, I’m still here,” Holliday explains.

“It’s a great field to be in. It’s challenging, it’s long hours, it’s every day, it’s 24/7 – people phoning if things change. But, hey, I wouldn’t change it for the world.

“Coming to Liverpool and being on the other side – not the agency side, the actual football club side – is interesting. You become part of that family. And, I must say, the atmosphere since Jürgen has come in is probably the best I’ve ever known with regards to how things are within the football club.

“It’s an exciting time to be here.”

A calmer time for Holliday, too.

His opening campaign with Liverpool tested all of the stamina and know-how built up in previous years as the Reds played 63 games in four competitions – including a run to the Europa League final which took in trips to France, Russia, Switzerland, Germany and Spain.

“Our Europa League campaign was just unbelievable, coinciding with the number of domestic games we had – it was every day, non-stop. It was the busiest I’ve known a season in this industry. That was crazy.

“It can be challenging, but therefore the key thing is to pick suppliers that are the best in their field. That’s ultimately what we want to do. The main thing is to ensure the team travel in the best possible comfort, to prepare them for the game. Logistically, everything has to be right.”

Advance planning is a cornerstone of that preparation.

Set patterns are in place for transport to domestic fixtures, varying from coach to train to flight – considering factors such as distance, travelling time, location and convenience.

Hotels that have not been previously used by the club are pre-checked personally by Holliday before the players are due to arrive for their stay, to ensure the required standards of security, space, and health and safety are met.

This season, for example, that has meant reconnaissance ventures to Middlesbrough, who returned to the Premier League for the first time in seven years, and Plymouth Argyle, who Liverpool had previously faced on the road back in 1962.

“We undertake all those checks and store them on file, and then we know if we go next time if there are any potential pitfalls we need to look at,” says Philip.

“Even to the point, Plymouth away – you’re at home, liaising with the airport, what time they are leaving. And you don’t relax until they land back in Liverpool, which was one o’clock in the morning, and then I’m up at six to commute from Manchester back to the office.

“That’s the most satisfying [part of the job]. You tend to find that people don’t give feedback in this world – so no feedback is good feedback, that’s the premise I work to!”

While Holliday’s daily role is typically ‘Two-fold… very much split between the football side and the business side’, requests from left field can land on his desk.

But, having helped overcome issues such as Liverpool reaching Madrid for the first leg of their Europa League semi-final against Atletico in April 2010 despite the ash cloud caused by the eruption of the Eyjafjallajokull volcano in Iceland suspending air travel across the continent, he’s equipped to cope.

“There’s always the unexpected,” he states. “[If] you get on a plane and the plane has a technical problem, everyone is looking to you.

“It’s how you manage that. The key thing in this field is experience and contacts, which you can only build up over a period of time.

“We had the team bonding trip to Barcelona, that was very quick – we’re talking two weeks from ‘We want to go somewhere for a team bonding session where the weather will be nice but not a long destination.’ Barcelona fitted the bill.

“If you’re in the [European] qualifying rounds, they can be quick turnarounds. Sometimes you can have eight days and destinations where you might need visas.

“We’ve now restructured and we’ve got a team in place. So I have got experienced people underneath me to help and assist.”

Another addition to Holliday’s workload in recent months has been the design and implementation of a brand new, best-in-class team coach.

A sneak preview of its exterior was released last week, showing off the eye-catching wrap which features ‘We are Liverpool’ across each side, the club crest in pride of place at the front and ‘You’ll Never Walk Alone’ on the rear window.

The interior, meanwhile, is being carefully constructed with state-of-the-art facilities to provide Liverpool’s players with the best possible preparation ahead of matches.

“It has been a four-month project to create a first, I would say, in team coaches in this country in how that is planned inside the bus with the seating and kitchen facilities,” Philip outlines.

“Therefore, there’s probably [going to be] more reliance on travelling a bit more by coach rather than flight because we have this best-in-class bus.

“Of the key objectives, one is comfort. Every seat reclines and there is ample leg room for players, who are 6ft4. It’s also got a state-of-the-art kitchen so our chefs can cook meals on there. After the game, it’s important that they eat. They can get meals on the bus on the way back to Liverpool or the local airport. That’s the main driver.

“Jürgen was involved from start to finish. He wanted something that can relate to the supporters, hence why we’ve gone with the wording on the bus that we have.”

That attention to detail is a hallmark of Klopp’s work with the Reds – and clearly Holliday’s, too. ‘A natural fit’ indeed.