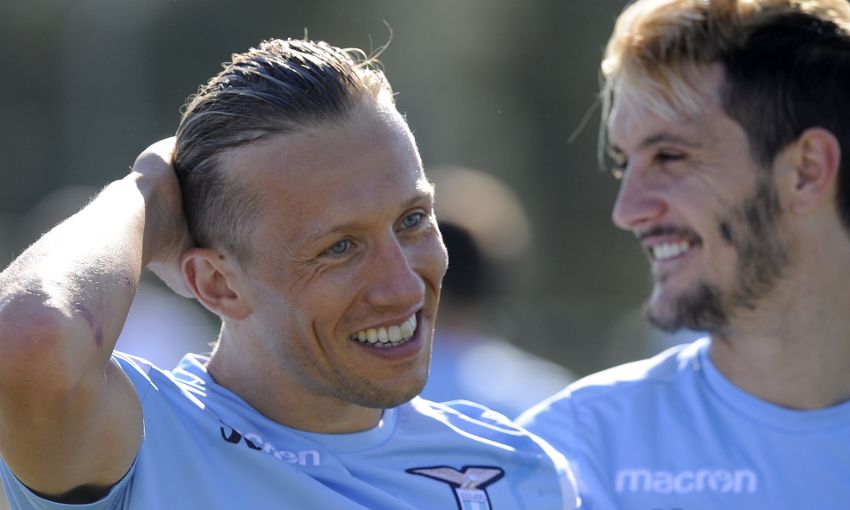 Liverpoolfc.com caught up with Lucas Leiva earlier this year to hear how the former Reds midfielder is faring in his new adventure with Serie A side SS Lazio.

The Brazilian’s 10-year association with the club came to a conclusion last summer when he departed Merseyside for a fresh challenge with his family in Italy.

His move has proven a huge success on a personal level, with 50 appearances and – somewhat unexpectedly – four goals to his name by the end of the season.

When the Reds were paired with AS Roma in the Champions League semi-finals in April, we headed out to the Eternal City to get Lucas’ take on the tie.

But there was much more to discuss, too – and you can read the rest of the interview below…

Lucas, it’s good to see you again, how much are you enjoying life in Italy?

You were at Liverpool for so long, were you a little nervous to start a new adventure here?

Yes, of course. It wasn’t easy to leave Liverpool because Liverpool is my home, I would say, because I was there for 10 years. My kids were born there and I still have a lot of friends there so it wasn’t an easy decision, but I had to think about my career as well and what I wanted. I started to realise that maybe my role in the team was a little bit more off the pitch than on it. At my age I wanted to keep playing and keep enjoying it. That’s why I think it was the right choice to move and find a new experience as well. The Italian league has been good this year, very competitive, and Lazio [have been] doing well so it has been great.

What has been the biggest challenge of the move, change of team and change in country?

I think there are a lot of challenges. Firstly, the idea [was] to play the whole season with no injuries, which is happening already as I’ve played over 40 games. Also, [it was] for the family to try something new. I remember when Stevie left. Of course it’s not the same but he said he was going to America to experience something new with the family. I only had these experiences with the family in Brazil and in Liverpool, so for me it was important as well to have a new experience, and I know Liverpool will always be my home but it has been good for me because I’ve been learning a lot.

What’s the big difference between Serie A and the Premier League?

The difference is the pace of the game. I would say the Premier League is more intense in terms of the players, but in Italy I’ve been learning a lot about tactical movements and shape, things like this. It has been important for me because it’s a season where you analyse a lot of the teams and small details, things that maybe in the Premier League it’s a little bit more different.

You are not the only former Liverpool player doing well at Lazio – Luis Alberto is the main man this season. How enjoyable is it to see him doing so well?

I’m really happy for Luis because he arrived at Liverpool very young and probably didn’t have the opportunity that he wanted, but it was a difficult moment for him there. He then went to play on loan for a few clubs in Spain and then last year when he arrived at Lazio he played not so many games, but this year he has been very important. He is one of our main players in terms of assists and also he is scoring a lot of goals, important goals, so football sometimes surprises in players who maybe at some clubs didn’t have a big opportunity but here he is doing really well and we just hope he keeps doing that for next year as well.

How many years were you at Liverpool?

And how many goals did you score?

Seven, if you count only the official [ones]! If it was in training I was top scorer!

Lazio less than a year, how many goals have you scored?

To be honest, I’ve been working on this. I remember Klopp as well, he said a few times to me I could score a few goals. But it was something in my head that was blocking me and I had a different perception. I always felt that if I went too much forward then maybe I would leave my teammates not protected. So I started to work on this here and with the confidence with games you start to, I wouldn’t say take more risks, but go a bit more forward and measure the risk without leaving the team exposed. So it has been happening, four goals this season, my best [goalscoring] season since I left Brazil with some assists as well, so that shows with confidence, with games and work, I think you can always improve.