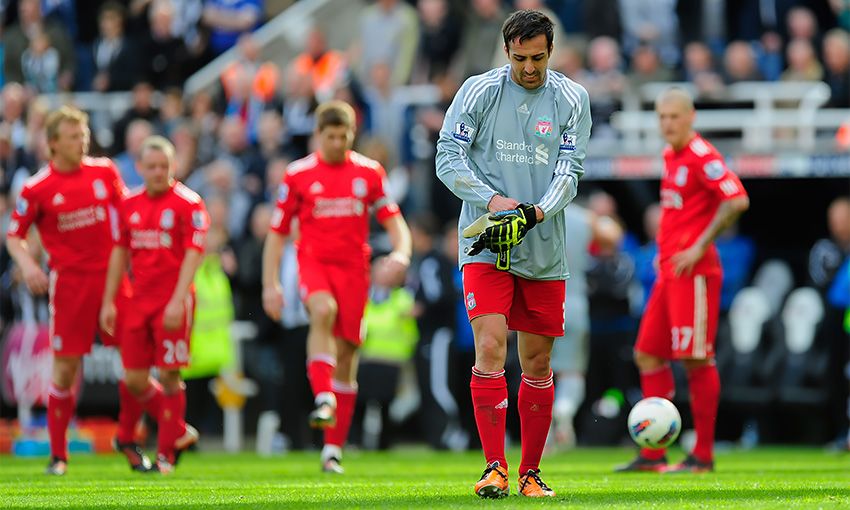 Centre-backs as strikers, full-backs in goal - and generally putting square pegs in round holes.

Red cards, injury issues and tactical tinkering have all given rise to some left-field player selections at Liverpool down the years, with varying degrees of success.

We've gone through the archives and picked out 10 occasions when Reds have been deployed in emergency roles. 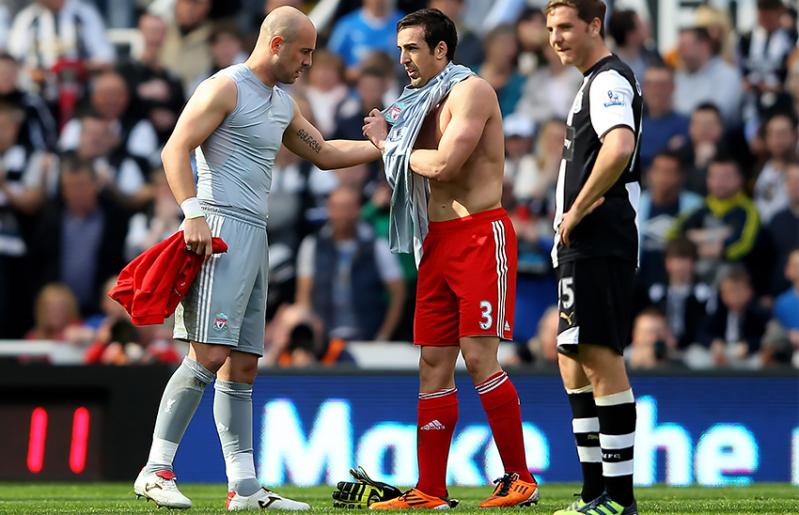 There's something captivating about the moment an outfield player goes in goal: the bizarre spectacle of an unusual figure between the posts and the anticipation of that first shot they have to face.

Jose Enrique faced that gamut of emotions against former club Newcastle United in April 2012 after Pepe Reina was sent off.

With all three substitutes already used, Kenny Dalglish put Enrique in goal for the final eight minutes of the match and the left-back kept a clean sheet, although the Reds were already 2-0 down at St James' Park. 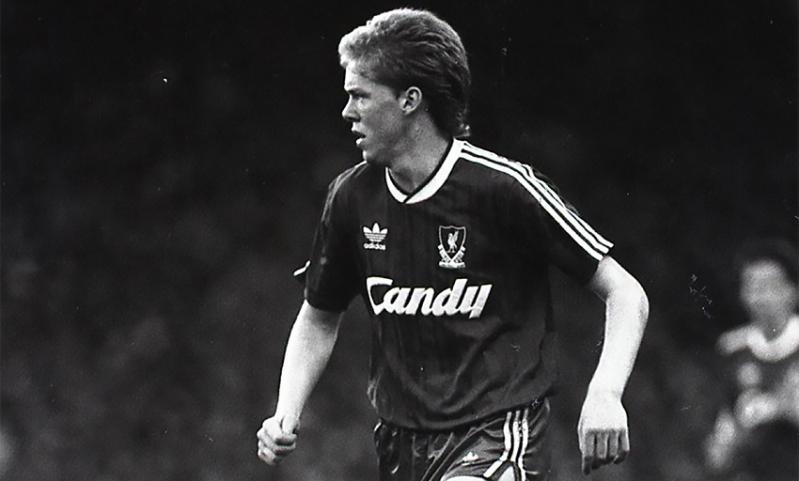 When defender Steve Staunton was thrown on as a striker to replace an injured Ian Rush at half-time of a League Cup tie against Wigan Athletic in October 1989, nobody foresaw what was about to happen.

With the match still goalless, the left-back connected with a David Burrows cross, rifled in from distance and capitalised on some good work from Ray Houghton to become the first ever Liverpool player to score a hat-trick after coming on as a substitute.

It took 21 years for an LFC player to match his feat, when Steven Gerrard came off the bench to net three times in a 3-1 Europa League win against Napoli in 2010.

Staunton's remarkable three strikes against Wigan remained his only goals that season. 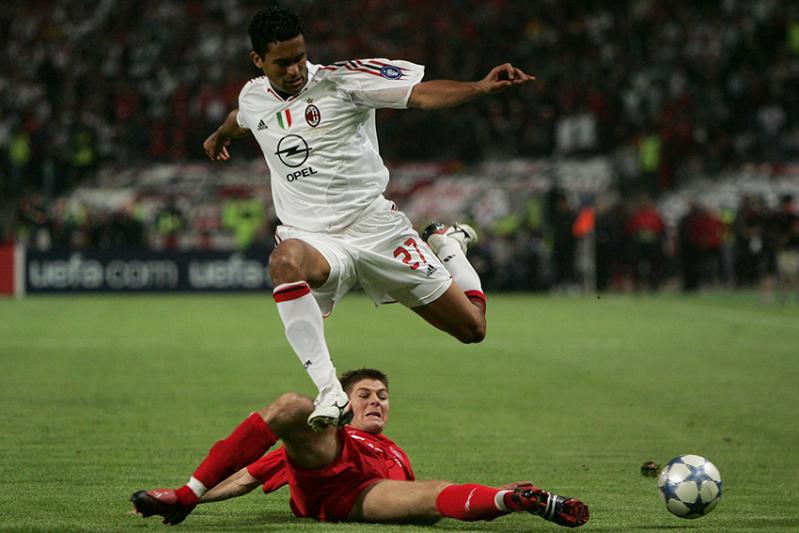 Steven Gerrard seemed to pop up in every position bar goalkeeper as he spearheaded the Reds' epic comeback to win the Champions League final in 2005.

In fact, the talismanic skipper was deployed in three different roles as Rafa Benitez's side fought back from 3-0 down to beat AC Milan.

"He started in central midfield," teammate Jamie Carragher recalls. "He then went into the No.10 role and got his goal there. And he got us a penalty as well, so got us back into the game.

"Serginho then came on for Milan and he is swapped with Vladimir Smicer and becomes a right wing-back.

"How many other players could do that in a European Cup final? You're not playing against a Mickey Mouse team, you are playing against some of the best players in the world!

"It was one of the greatest performances of any player in a European Cup final ever." 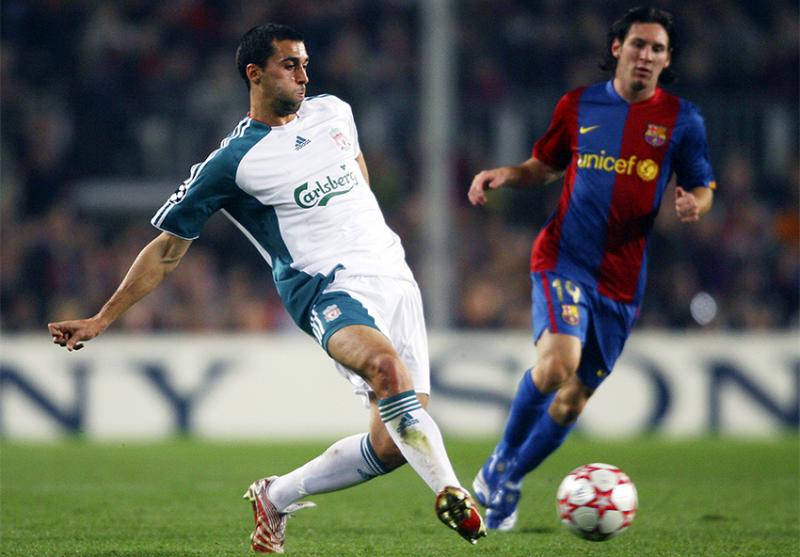 The fact that right-back Alvaro Arbeloa made his full Liverpool debut out of position at left-back appears a little underwhelming on the face of it.

But throw in the fact that it was in the Champions League, against Barcelona, at the Nou Camp and in direct opposition to a certain Lionel Messi and it looks much more impressive.

Benitez theorised that his fellow Spaniard could use his stronger right foot to deal with Messi, who liked to cut inside from the right flank.

It worked a treat. Arbeloa excelled and Liverpool ran out 2-1 winners in the 2006-07 Champions League last 16 first leg. 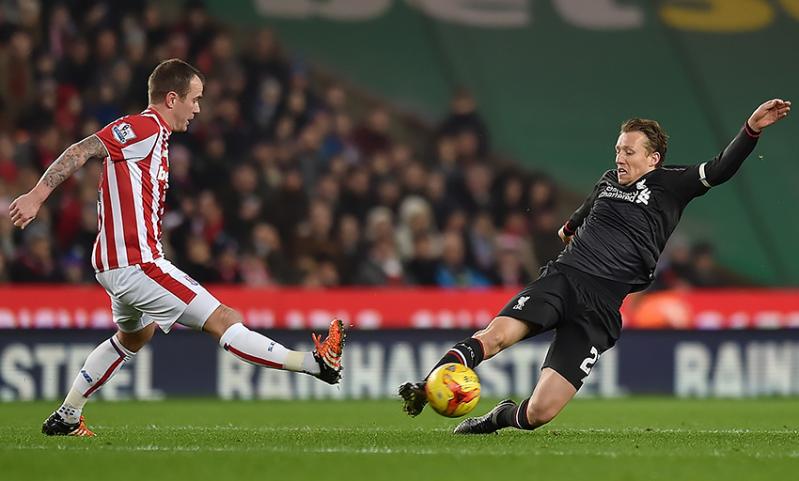 Lucas Leiva cut an unlikely figure in the heart of Liverpool's defence during a League Cup semi-final first leg against Stoke City in January 2016 after Dejan Lovren was forced off with an injury.

With a lengthening list of defensive casualties, Jürgen Klopp was forced to deploy the experienced Brazilian midfielder at centre-back.

Playing alongside Kolo Toure, Lucas helped keep a clean sheet in a 1-0 win and tackled Bojan Krkic with such eagerness that the match ball was punctured.

In fact, Lucas, who was also captain for the day, excelled to such a degree that he would go on to play at centre-back on several more occasions for the Reds. 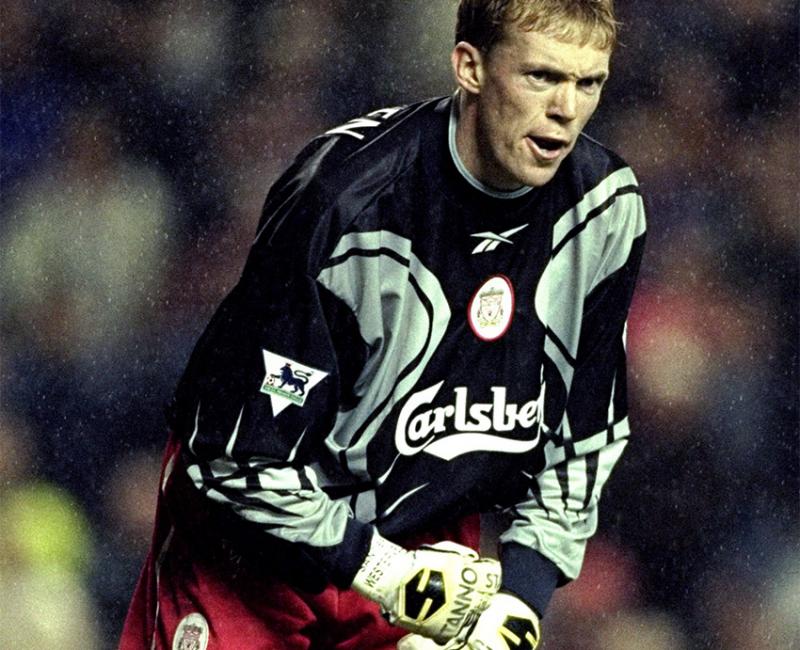 When Everton's Francis Jeffers and Reds goalkeeper Sander Westerveld were shown red cards, it was defender Staunton who picked up the gloves with 15 minutes left to play.

He kept a clean sheet, but Kevin Campbell's fourth-minute strike gave the Toffees a 1-0 win in a match that saw Gerrard dismissed in injury time. 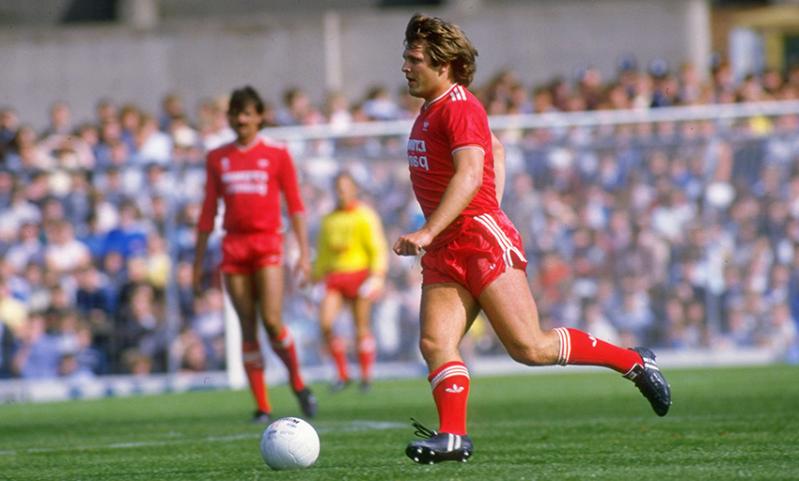 Midfield maestro Jan Molby, widely regarded as one of the finest passers of a football to ever pull on the red shirt, actually played as a sweeper during much of the 1985-86 double-winning season.

As part of a tactical ploy devised by player-manager Dalglish, the Dane was often a third central defender early on in a match before pushing further forward alongside Steve McMahon in midfield as the game progressed.

"He never played me as a sweeper because of my defensive qualities," Molby explained to LFChistory.net. "But because of my ability to start play from the back, so it wasn't too bad."

Twenty-one goals in 58 matches during the campaign wasn't too bad either. 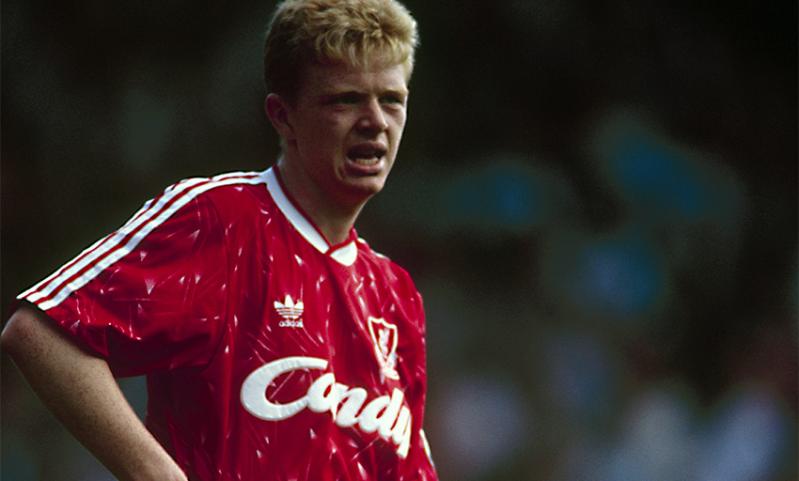 With Liverpool heading for a 2-2 draw in the first leg of the 1992 European Cup Winners' Cup second-round tie against Spartak Moscow, goalkeeper Bruce Grobbelaar was sent off for upending Dmitri Radchenko in the box.

The Englishman guessed the correct way and came within inches of a remarkable save but Valeri Karpin's spot-kick nestled in the back of the net and Igor Lediakov added another on the stroke of full-time. 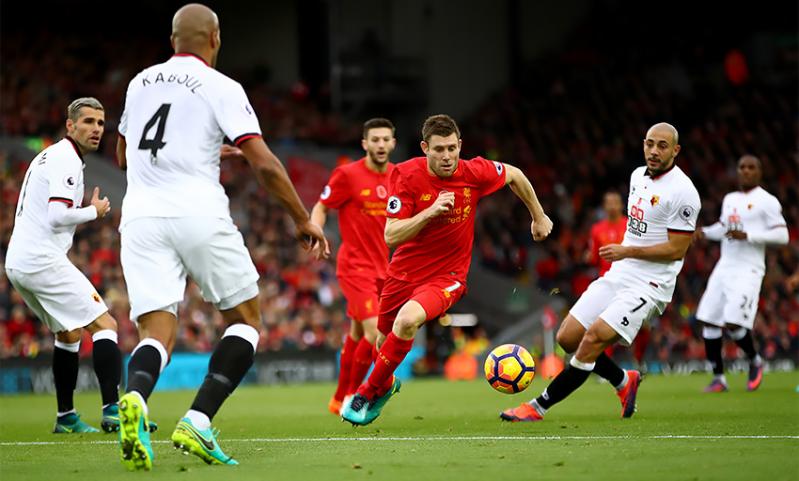 James Milner proved so effective as an 'emergency' left-back that by the end of the 2016-17 season he was ranked as the second-best full-back in Europe.

The Reds' vice-captain made a solitary start at left-back in 2015-16 as Klopp's Reds knocked Manchester United out of the Europa League, but the following year he made the role his own, scoring seven goals in 36 Premier League games as Liverpool qualified for the Champions League.

Such was his impact that a CIES Football Observatory study declared him the best full-back in the Premier League, with only Juventus' Alex Sandro ahead of him across Europe. 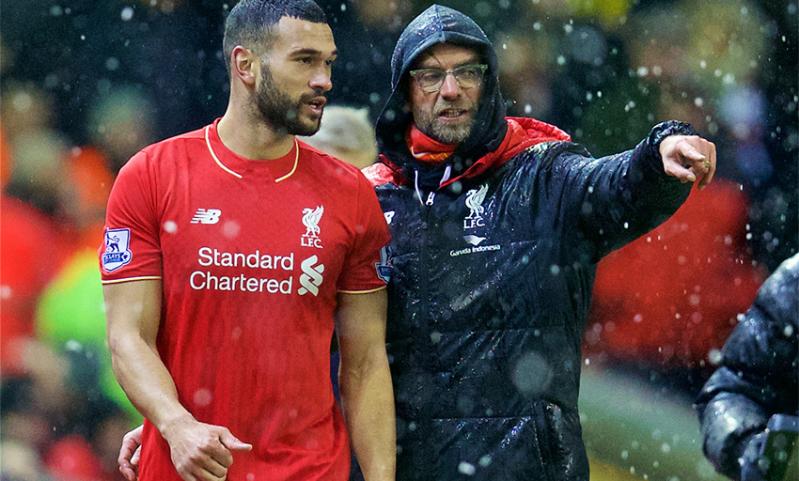 However, when the one-time England international made his debut the following day, he did so as an emergency striker.

With Klopp's side 3-2 down against Arsenal, Caulker was thrown up front to replace Adam Lallana just before Joe Allen grabbed a last-minute equaliser.

In fact, three of the defender's four appearances for the Reds came as a substitute striker.

Indeed, it was his persistence that led to Lallana's dramatic last-gasp strike that secured a thrilling 5-4 win at Norwich City and sparked celebrations that ended with Klopp breaking his glasses.

'Go on YouTube and have a look - he was absolutely sensational'