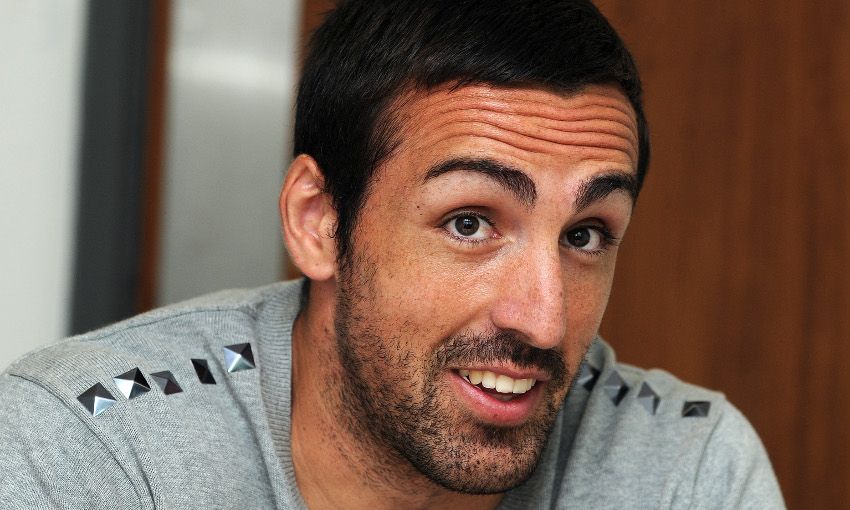 Jose Enrique has paid tribute to the medical staff who oversaw his recent life-saving surgery and the Liverpool fans and former teammates who have sent kind messages during the early stages of his recovery.

The 32-year-old, who spent five years at Anfield following a 2011 move from Newcastle United, last month announced that he had been forced to undergo surgery after being diagnosed with a rare form of brain tumour.

The news prompted thousands of supporters to send their best wishes to the popular Spaniard, and he was keen to place his thanks on record as he continues his recuperation back in his homeland.

Read on for a transcript of Enrique's interview with Liverpoolfc.com...

First of all, how are you feeling?

I’m feeling OK, it depends on the day. Sometimes, because here the weather is nice for holidays but it’s not the best for what I have because I cannot do too much, it’s a little bit annoying but I’m just getting better day by day.

I was in England, I travelled with my brother because I’m an agent now, [as] my brother has been doing for a while. We went to meet some clubs and that night we were with Chris Hughton from Brighton having dinner in London. I was at the dinner and I said to my brother, ‘I cannot see properly, the light is bothering me a lot, I don’t feel very well’. So, we finished the dinner and the day after I started to see a little bit blurry. My brother said, ‘Maybe you have a migraine or something’, because he had it the week before and it’s normal you feel that way. The day after my partner, Amy, arrived in London because we were going to Paris with the family, [but] on Thursday when she arrived I started to see double. I couldn’t walk properly because I couldn’t see and I started to get a little bit scared because of it. So, we went to a hospital and, like every other person, waited there eight or nine hours to do all the tests and everything. They talked to St George’s hospital in London, which is just for neurosurgery, and they wanted to see me. They did another test and a doctor came and said, ‘I don’t want to scare you – I know the word tumour everyone thinks cancer and it’s going to spread everywhere and you’re going to die, it’s not that’. It was a tumour near the nerves of my left eye and that’s why I wasn’t seeing properly. It’s not normal, this type of tumour, normally you have it on the back or the spine, it was more or less one person in a million could have this. [The doctor] said it cannot spread but it’s very aggressive and I could have had it since I was young or even since I was born. It wasn’t cancerous but it was in a place that is very dangerous because it has main arteries and veins just behind it. I went to get a second opinion in Valencia, I saw Dr. Simal and he said exactly the same as the doctor in England and it was a little bit of a relief that I wasn’t being diagnosed with two different things. The solution was surgery, 100 per cent, through the nose and not to open my head or anything. Before I got the operation, the doctor said to me, ‘Jose, I cannot promise you that you’re going to see like you used to see’. Being a 32-year-old, they tell you that… That was not nice.

Thankfully the surgery was a success, but that wasn’t the end of it…

It was scary and after I had the operation done it was a very, very bad time in the hospital, [as] my partner knows and my family. It’s been a very, very difficult time since. I was in the hospital for a week and it looks like very little [time] but in that week it was a nightmare because you realise a little bit how many people are ill in that moment. It changes your life a bit, the way you think. After a week they sent me home but still with a lot of [issues]; I can’t go downstairs by myself, when I go to the toilet I can’t lift the lid, when I clean my teeth… It’s silly things that in a normal life you do and you don’t realise how easy it is to do it until you can’t. I couldn’t walk, if I do 10 or 15 minutes – it’s a little bit more than that now - it was like I had played two games in a row! It was crazy, really, really tiring. I see the doctor tomorrow and I’m still waiting on the dates for radiotherapy.

What have the messages from your former teammates – the likes of Philippe Coutinho and Pepe Reina – meant to you during this time?

To be honest, it’s been incredible, the support – not just these messages. The reason I did the interview [with Marca] was because I wanted to thank the doctors [and] doctors in general. The reality is until something like this happens to you, you do not appreciate what they do. They are behind the scenes and no-one sees them and they do this type of job every day. The doctor who operated on me, he operates five times a week! My operation was seven hours! This guy lives for saving lives and people recognise footballers because we are in the media but nobody recognises these people. [The doctor] told me after that he had read my interview and seen the videos and his staff, some of them were crying, because nobody normally recognises this type of job. They have, sometimes, bad news also - they operate on people and they don’t live. And where I got operated on was a public hospital, not a private one, and they did an amazing job.

And what about the well-wishes you’ve received from Liverpool fans?

The fans have been amazing. It was impossible to reply because there were thousands and thousands of them! I’m glad you called me as well because I cannot thank them enough. Every day I receive messages and I want to tell people that I read them. The support has been amazing.

Just finally, you’ve still got some recovering to do but do you think we might be able to see you at Anfield once again in the future?

One hundred per cent. I have to say, Liverpool have been amazing with me. They contacted my brother because I was having the operation and they said that LFC have the doors open for me whenever. I knew anyway but after you have something like this and they call you, you really appreciate it. I can’t thank them enough and this is an opportunity to say thanks to the club. Jordan Henderson sent me a text as well; he was at the World Cup focusing on that and he still texted me to wish me good luck, that was nice for me. A lot of my ex-teammates, like Dejan Lovren, also contacted me. It gives you a little bit more strength. My Liverpool teammates know I’m always a positive person, always laughing, always joking, but it doesn’t mean I’m not in a bad time. My message to everyone is: Thanks to God, there are a lot of advancements in medicine right now, it doesn’t mean it’s not going to be difficult but the reality is you can be [helped]. My tumour was very rare, very difficult, I still have the radiotherapy, 35 sessions or something. But it’s very important to be positive and believe in the people that do the job.