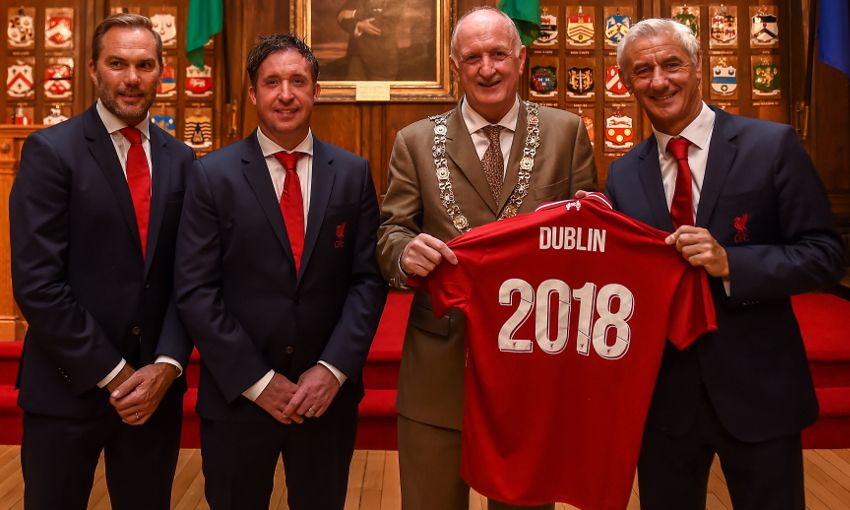 The reception saw the recently elected Lord Mayor welcome the Reds to the city for a second successive year as part of the club's ongoing pre-season schedule.

He said: "Dublin and Liverpool are inextricably linked through our shared history and culture, and the connection with Liverpool Football Club is equally as strong. From the days of Steve Heighway through to Ronnie Whelan, and more recently Robbie Keane, the Dublin association continued apace and support for the Reds in Dublin and Ireland is as solid as ever.

"It is obvious that the club values its Dublin and Irish fanbase, as was evidenced at last year's friendly against Athletic Bilbao, when Jürgen Klopp and his players took the time after the match to meet with as many fans as possible throughout the ground. The Reds are most welcome to Dublin and I know that in my city they will 'never walk alone'."

LFC ambassador Rush presented the Lord Mayor with a commemorative 2018-19 home shirt and thanked the city for such a warm welcome.

The legends were also joined by members of the Football Association of Ireland's board, including FAI president Tony Fitzgerald and two special guests - Eoghan Dunne and Douglas Fullerton - who were selected to attend the reception by the FAI, creating a memorable experience for all.