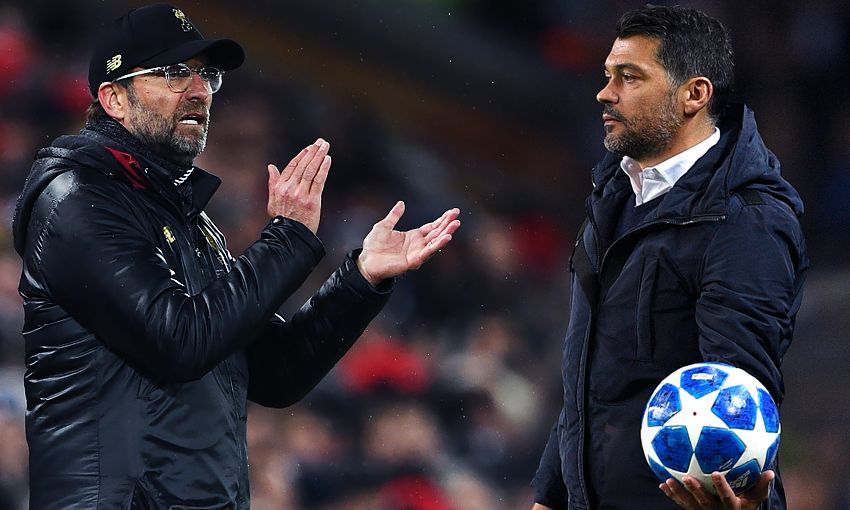 The Reds overcame Bayern Munich in the previous round after a headline-grabbing 3-1 win at the Allianz Arena, while Porto beat Italian side AS Roma 4-3 over two legs.

Liverpool faced the Portuguese side in the Round of 16 of the competition only last season, when Jürgen Klopp's men ran out 5-0 winners en route to the Champions League final in Kiev.

Meanwhile, opposition boss Sergio Conceicao went on to guide Os Dragoes to their first Primeira Liga title for five years and is currently vying with Benfica for a repeat triumph this term.

So, what can we expect from Porto at Anfield on Tuesday?

We caught up with Maisfutebol journalist Luis Pedro Ferreira (@luispedro10) to find out...

How is Porto's form heading into this match? 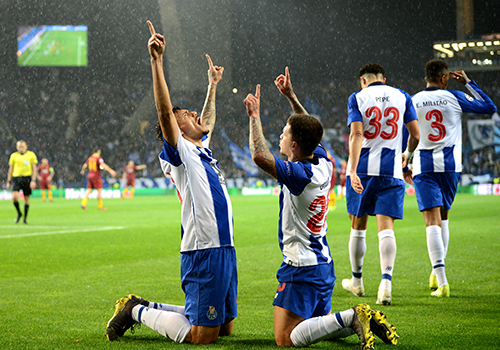 When Porto lost at home to Benfica on March 2 they also lost top spot in the Portuguese league. Six games later they are now equal on points. Although Benfica have the advantage on the tie-breaker [games between the two teams and not goal difference] Porto's recent displays show the team are confident of retaining the title.

From the Benfica defeat onwards, there has been only one game where you would say Porto didn't play to their best: against Braga, in the Portuguese Cup semi-final second leg when they drew 1-1, but having won 3-0 at home they were pretty comfortable going into the game.

Last Friday's derby against Boavista was good to build confidence going to Anfield. The team had a very good display and result, winning 2-0, and could even manage the match with this Champions League tie in mind.

Overall, only three teams have beaten Porto this season: Vitoria de Guimaraes, Roma and Benfica (twice). They had a 26-game run without losing from October to February and Conceicao has been able to manage some key players' physical condition and suspensions.

He will have to do the same this Tuesday.

How is the tie being portrayed in the Portuguese media?

Everybody was focused on the Primeira Liga going into the weekend because the title race is even closer than in England.

Attention started to turn to the Champions League this Sunday and the focus was mainly on the fitness of Alex Telles. The left-back is a major piece of Conceicao's team - you can read more about that a bit later.

Tactical analysis on Liverpool has already been published and, of course, whether you are an FC Porto supporter or not, everybody is thinking about last year's 5-0 defeat against Klopp's men.

What has changed since Porto last faced Liverpool?

If you look at the names that were on the pitch last season against Liverpool and this year's expected line-up, you have to say a lot has changed. In the defence, only Alex Telles remains from last year's 5-0 result. Jose Sa [Olympiacos], Ricardo Pereira [Leicester City], Diego Reyes [Leganes] and Ivan Marcano [Roma] all left the club.

Eder Militao joined Porto in the summer from Sao Paulo and has already been sold to Real Madrid, whom he will join at the end of the season. He is very quick, has good technique and can play as a right-back, but it's in his centre-back role that his game is best. His speed means he is able to catch fast forwards.

In January, Pepe also returned to the club, which has to be seen as a great acquisition.

Midfield and attack will also be different. Danilo wasn't available last season and Oliver Torres had a smaller role in the team than he has had this year. Up front, striker Vincent Aboubakar is injured, and the attack will depend on Conceicao's strategy.

That said, the team's style hasn't changed much from last year.

Very physical and very direct when they get the ball.

Like last year, they switch from 4-4-2 to 4-3-3, with the former formation preferred for the Portuguese league. They like to press high and they are positively aggressive when they lose the ball, trying to get it back. You need to have quality to escape their pressure, otherwise, if you play long balls, their physical ability is something you'll have to cope with.

In possession, Porto are very focused on getting the ball to their offensive players as fast as they can. Wingers Yacine Brahimi and Jesus Corona usually bring the ball from left or right into the central corridor and let the full-backs go wide and overlap. If Alex Telles is playing, his crossing and set-pieces are a major threat. Every corner and free-kick he takes is dangerous and the team has scored a lot of goals from that.

Moussa Marega's speed and directness is one of FC Porto's main threats. The Mali international may not be a technical player like Brahimi or Corona but he sums up the Porto style: power and straight to goal.

He can also play on the right wing, which means Tiquinho Soares would play as a lone striker. I think Soares is an underrated player in Portugal. He may not be a 'fancy' striker, but his work-rate and never-say-die attitude has brought him goals. He's the in-form striker at the moment, however, I am not sure he'll start at Anfield.

Who has been the star of the side this season? 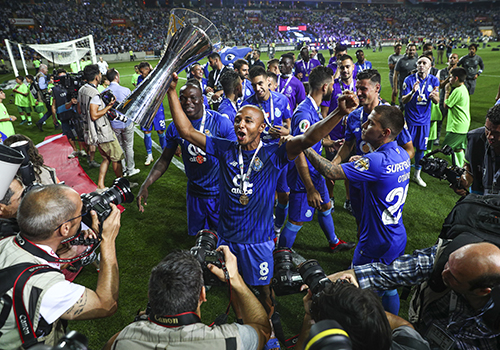 Probably, Brahimi. His tricks, speed and 'dancing' with the ball make him a different player. Conceicao has had to manage his physical condition - and benched him on a few games due to that - but if you ask who Porto's best player is, the vast majority of supporters would reply with the Algerian's name.

And who has been the unsung hero?

Hector Herrera. The captain is suspended for the first leg and that is a major blow. He may not be as spectacular as Brahimi, but his importance to the team is huge.

Before Benfica defeated Porto in March, the opposition boss picked out Herrera as the player that made the difference to their strategy. Porto will miss his forward runs and ability to shoot from long range.

Which areas do you think the teams will look to exploit in each other? 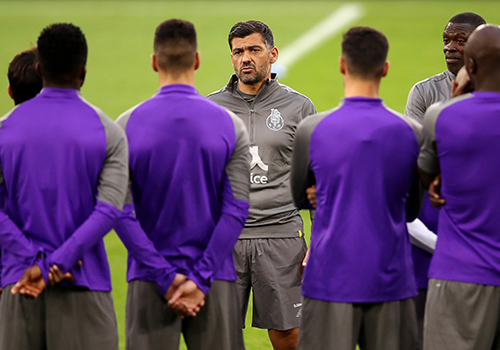 Porto are a dominant team in Portugal but, as I said before, Liverpool pose another type of threat. I'm not sure that Conceicao will apply his high-pressing game at Anfield. Probably, not. However, Porto will try to exploit the space at the back of Liverpool's defence if the Reds hold a high line. Basically, they will try to have an even faster transition from defence to attack, with Marega running behind defenders.

Porto will also look for set-pieces, especially if Telles is playing: Danilo, Militao, Felipe and Pepe [suspended for the first leg] are a real aerial threat.

I think Liverpool will play a high-pressure game. Porto have difficulties if they have to elaborate their build-up play. Then, it will depend on who's playing where. Wilson Manafa would be one of the full-backs due to suspensions and injuries, but he's not registered to play in the Champions League. That's why getting Telles fit is so important for this game, otherwise, Conceicao will have to adapt someone as a left-back and that's always something Klopp's men can exploit.

Porto have been brilliant in this year's European campaign but Liverpool at Anfield is a different challenge from any other the team has faced all season. And that's why we'll see a different approach from Conceicao's men. One good thing for Porto is that, after last year's experience, they all know who they are facing.

What have you made of Klopp and Liverpool this season?

What everybody else has, I suppose. Top team! In my opinion, they are one of the favourites to win the Champions League, alongside Manchester City and Juventus. Playing the Reds at Anfield is, probably, the most difficult venue in Europe these days.

How will Porto line up against Liverpool?

Tough question and I think you already know why: it all depends on the fitness of Telles. Let's take a chance and say he recovers. 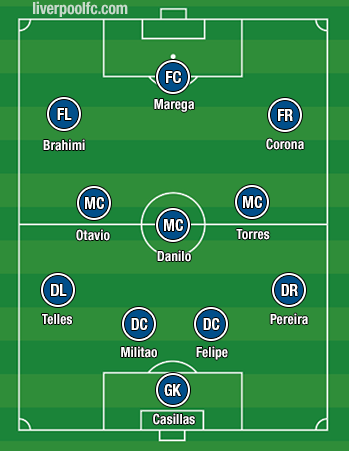 Corona is also an option to play right-back instead of the veteran Maxi Pereira. If that happens, the attack would be Marega, Soares and Brahimi.

If Telles doesn't play... I really don't know how Conceicao will manage that.

I'm not going to risk a score. Liverpool have lost only once at home against Portuguese opposition, the Premier League and Portuguese league are two worlds apart and even if Porto have been able to make history in Europe, the reality is the Reds are clear favourites.