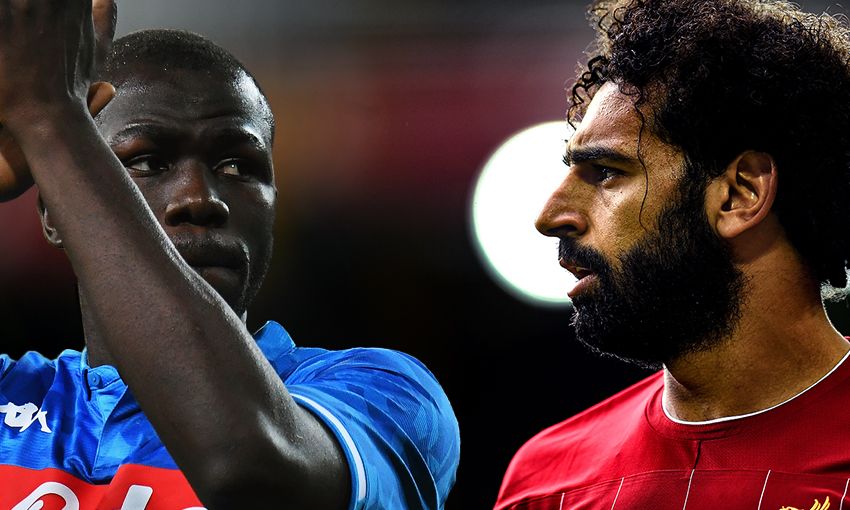 Liverpool kick off the defence of their Champions League title against Napoli this evening at Stadio San Paolo – and we have picked out three key match-ups in the Group E opener.

The fifth competitive meeting between the clubs, it will be the third in just the last 12 months after they faced off in the group stage of the European Cup last year.

Those meetings produced a 1-0 win apiece for Jürgen Klopp and Carlo Ancelotti’s sides, and these three individual battles could be influential in settling their latest clash…

That Alisson Becker save from Arkadiusz Milik aside, it was the defining moment of Liverpool and Napoli’s Anfield meeting last December, and therefore one of the defining moments of the Reds’ entire Champions League adventure in 2018-19.

With 34 minutes of their matchday six clash played, Mohamed Salah spun on the edge of the box, advanced on Kalidou Koulibaly, beat him and slipped a shot through David Ospina’s legs. With that, Liverpool were on their way to the Round of 16, and a side coached by Carlo Ancelotti were eliminated at the group stage for the first time in 18 years.

Fast forward a year and the two stars are all set to do battle again, following a summer where both endured disappointment at the Africa Cup of Nations; Salah’s Egypt – the hosts – lost out to South Africa in the last 16, while Koulibaly’s Senegal went all the way to the final before falling 1-0 to Algeria.

Although the likelihood is that Salah will start on the right wing, his tendency to drift inside, coupled with Koulibaly’s status as the leader of Ancelotti’s defence, makes direct conflict between the two national heroes a distinct possibility.

After slicing in a 93rd-minute own goal in Napoli’s 4-3 loss to Juventus as he and his defensive colleagues conceded seven times in their first two Serie A fixtures, Koulibaly helped them shut out Sampdoria on Saturday.

The 28-year-old is one of Europe’s most highly-rated centre-backs and will be determined to build on that clean sheet with the aid of new defensive partner Kostas Manolas. 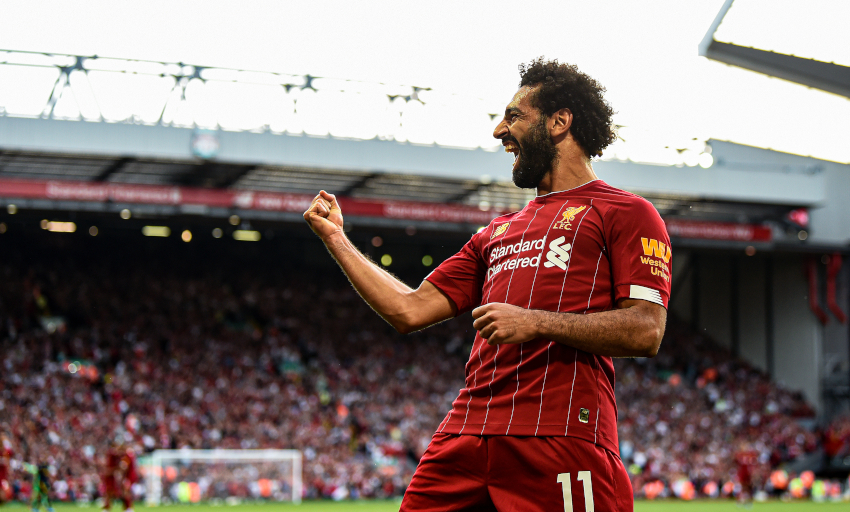 As for Salah, who followed up his Standard Chartered Player of the Month award for August with a sumptuous strike against Newcastle United at the weekend, he’ll be looking to repeat his feats of October 2016, when he scored AS Roma’s third goal in a 3-1 win at Stadio San Paolo, having dispossessed Koulibaly at the byline to set up Edin Dzeko’s opener earlier that afternoon.

If anyone stands to benefit from Napoli’s shift to a 4-2-3-1 shape this season, it’s Fabian Ruiz.

The versatile midfielder was named Player of the Tournament as part of the Spain side that won the U21 Euros in Italy during the summer; not a bad achievement when you consider that no fewer than three of his teammates – Jesus Vallejo, Dani Ceballos and Pablo Fornals – all earned moves to the Premier League off the back of their performances at the competition.

Used on the wing in some matches and the engine room in others last season, Fabian appears to have been given a more prominent role by Ancelotti in his sophomore campaign in Italy, operating as a No.10 in behind Dries Mertens – or whomever Ancelotti selects as his lone centre-forward.

Formerly of Real Betis, the 23-year-old has been inducted into the senior national set-up more recently, playing all 90 minutes of Spain’s 2-1 away win in Romania earlier this month.

One challenge Fabian was not posed with in either of last season’s group-stage games, however, is the hard-tackling vigilance of Fabinho. 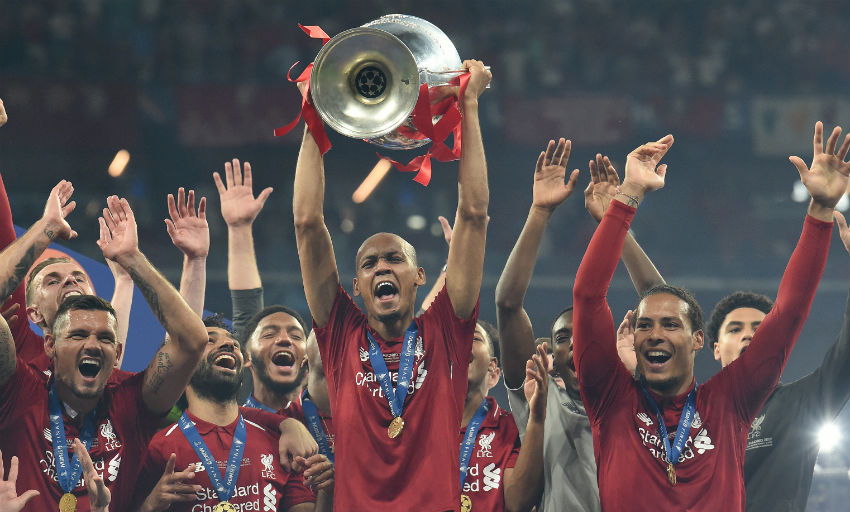 The Brazilian featured only briefly from the bench in Naples and at Anfield last year as he continued the process of gradually adapting to Klopp’s methodology, but came on strong in the second half of the campaign, starting five out of six of the Reds’ knockout fixtures on the road to Madrid and then the final itself.

This season, the man dubbed ‘the lighthouse’ of Liverpool’s midfield by assistant manager Pep Lijnders has been one of the first names on the teamsheet, starting every game bar the 2-1 win at Southampton.

As well as a team-high 13 tackles in the Premier League so far, Fabinho has also showed off his silky distribution when given the opportunity, playing an average of 65 passes per 90 minutes, with seven chances created and one assist provided.

“I think this is the strongest Napoli side I’ve played in,” commented Lorenzo Insigne before the Serie A season kicked off. “We have some excellent young players like Fabian Ruiz who are really settling in and the fundamental thing is that the group assimilates the tactician’s ideas.”

Certainly there’s no-one better qualified to make such an assessment; at the relatively young age of 28 the native Neapolitan is Napoli’s longest-serving player, and continues to be just as much of a menace to San Paolo visitors as he was under Ancelotti’s predecessors Walter Mazzarri, Rafael Benitez and Maurizio Sarri.

The 32-times-capped Italy international scored two and set up two in his side’s 4-3 opening day win over Fiorentina and will be hoping to again indulge his habit for striking against Premier League clubs, after netting against Swansea City in 2014, Manchester City in 2017 and twice against Liverpool over the last year. 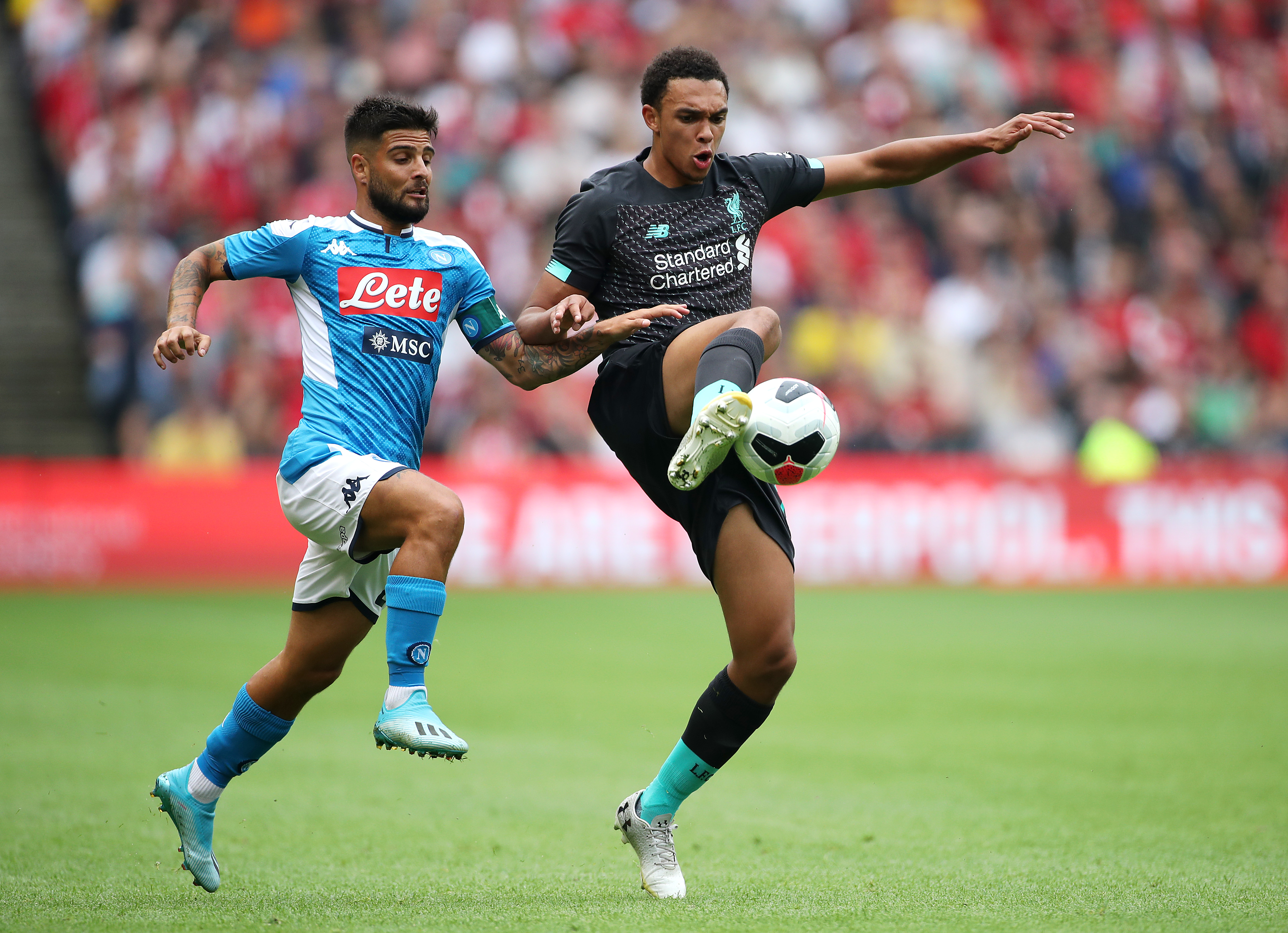 Those goals against the Reds illustrated how his role has evolved during Ancelotti’s tenure; a tap-in in Napoli’s 1-0 win at the San Paolo just under a year ago – at a time when he was being trialled at centre-forward – and a trademark right-foot curler from the left side of the box in July’s friendly at Murrayfield, after being restored to more traditional territory on the left wing.

If things go to plan for Liverpool, though, Insigne could spend as much time pursuing Trent Alexander-Arnold back up the flank as he does threatening Adrian’s goal.

As hometown lads living the dream of playing for the club they grew up supporting, the two have a lot in common, but are likely to be locked in fierce competition tonight.

Assist specialist Alexander-Arnold set up four of the Reds’ goals in last season’s Champions League, though didn’t get off the mark until the quarter-final against FC Porto, so will be aiming to register much earlier this term.

The No.66 has also expressed his determination to keep things tight at the other end, with the 3-0 win at Burnley before the international break representing Liverpool’s only clean sheet of 2019-20 to date.