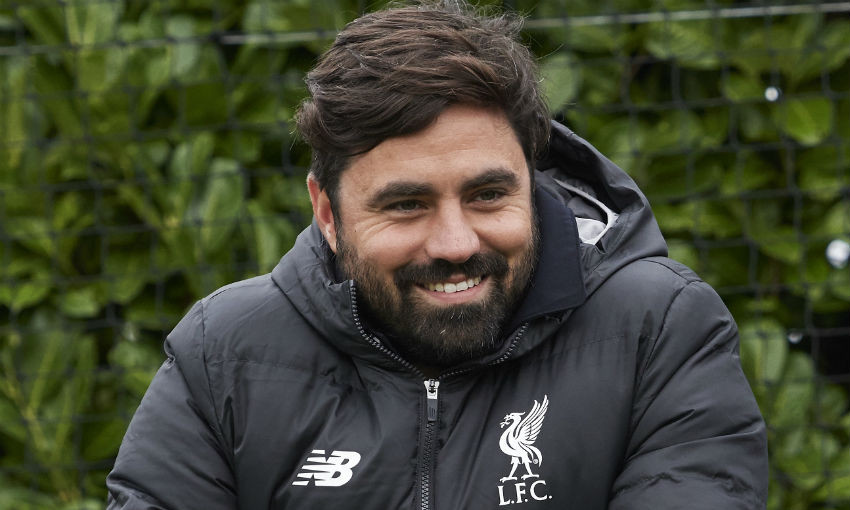 It's a neat description and an accurate one, too.

Pepijn Lijnders came up with the term while also labelling his successor as the club’s elite development coach ‘our best signing of the season’.

It will become clear that Lijnders’ admiration is very much reciprocated; that Matos considers the Reds assistant manager to be much more than just a colleague of his past and present.

But first, can the Portuguese paint us a more detailed picture of what exactly his job entails?

“My biggest goal is to create development. You can create development in different ways but the most important thing is that you understand football as a collective game,” Matos informs Liverpoolfc.com during a wide-ranging chat at Melwood.

“My role is to say: ‘OK, we have these Academy players. How can we help them learn the game ideas of the first team, and how can we use those game ideas to continue their individual development?’

“My first idea when I arrived was that I needed to know every one of the U18 and U23 players and discuss, ‘What’s the big idea for him?’

“I needed to know which person I need to speak to and work with to achieve this. It’s about knowing the club, knowing what the expectation is for a youth player to come and train here [at Melwood].”

“And about being the club’s connector, it’s funny. That’s something that is involved with the role because we have to make sure information goes around the different departments properly.

“For example, with a player who trains at Melwood and then plays at the Academy the question is what happened here in the training session that we need to continue at Kirkby, so he is not only doing it at Melwood? How we can work that, that’s my main role.” 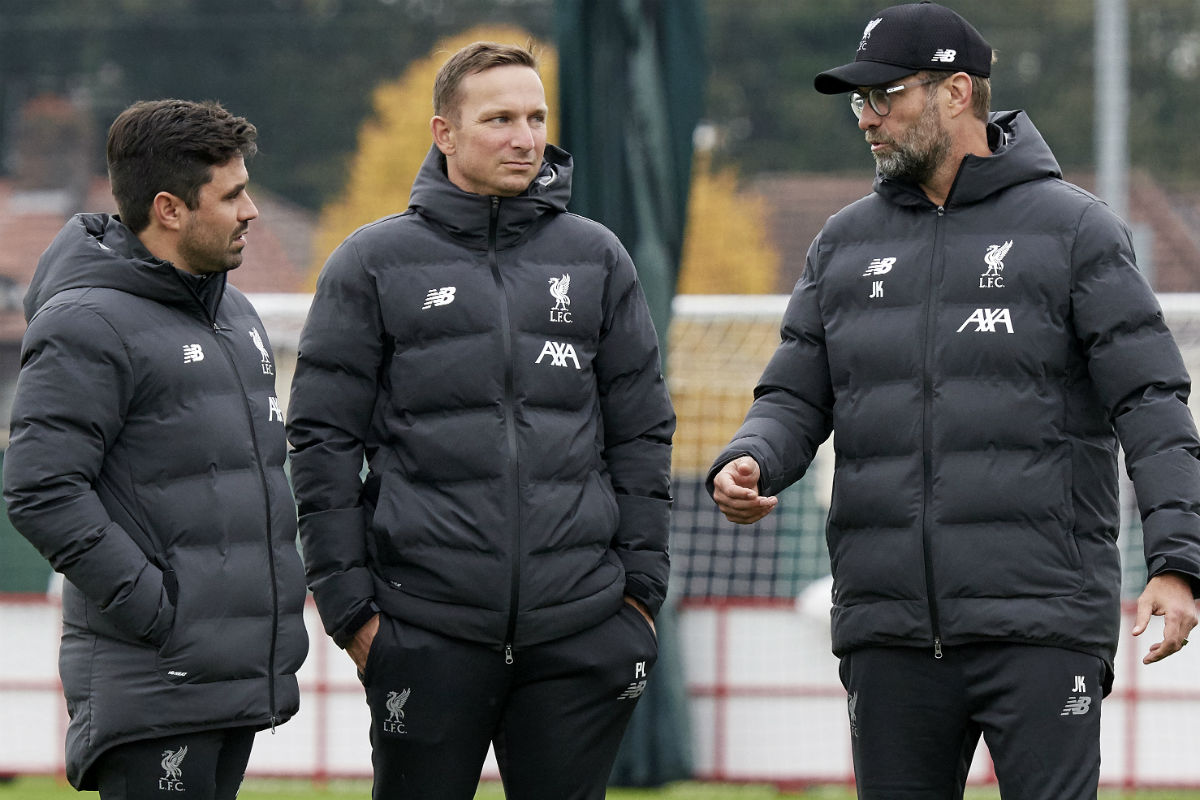 Upon the announcement that Matos had joined Liverpool in October, Jürgen Klopp spoke of the new recruit’s rarefied blend of experience and youth.

The majority of the 31-year-old’s career to date has been spent across two spells with FC Porto. After starting out with regional sides Clube Futebol Valadares and Clube Desportivo Trofense, Matos initially joined one of Portuguese football’s traditional powerhouses in 2011.

Over the course of the next five years, he would coach at levels ranging from the U10s to U17s and provide opposition scouting reports for the U19 and B teams.

He left in 2016, taking in a two-year period as technical coordinator and U16 head coach for Shandong Luneng in China, before returning to Porto as assistant coach of the Primeira Liga giant’s second string.

Then, the call came.

“After the phone rang, it started already bubbling inside of me: ‘This is Liverpool and you can never say no!’” Matos, a holder of UEFA’s best-in-class Elite Youth A Licence, recalls.

“My biggest concern was ‘OK, let’s solve everything with Porto in the most respecting way’, and after everything came through it was an amazing feeling.

So why couldn’t a young man who had made rapid progress through the ranks within one of his home country’s biggest clubs reject Liverpool? Doing so would have been the easier option, surely?

“More than everything you feel the club. You feel that it is a club with a massive history, a club with a strong personality, with a big culture and I love these kinds of clubs. The connection that we have in the club and with the fans, it’s unbelievable.

“Everything attracted me to this club.” 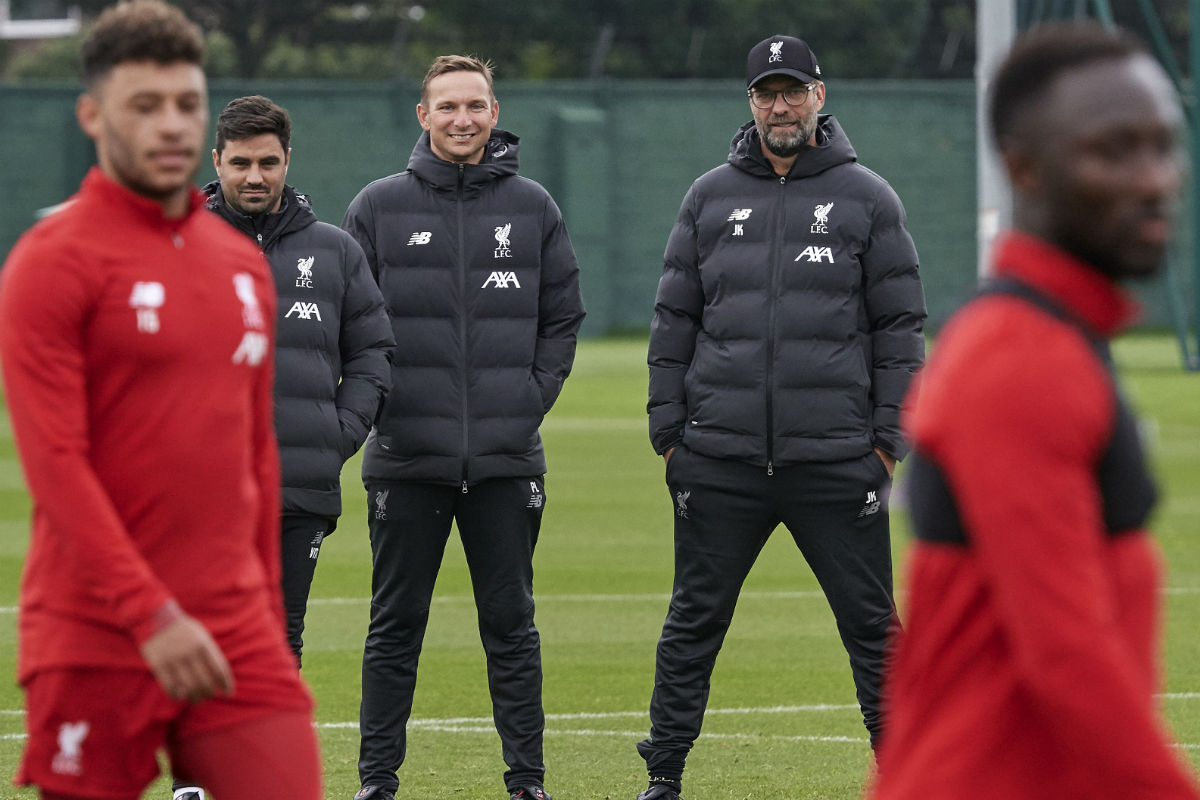 While Matos namechecks several members of staff at Melwood and the Academy as being key to his smooth transition to life on Merseyside, the presence of a former Porto ally in Lijnders has been hugely beneficial - both professionally and personally.

“It’s amazing for me to have the opportunity to work with Pep again because more than a friend, he’s a source of inspiration [with] the passion that he puts into his work, the professionalism that he has, his pursuit for improving a little detail in training sessions or in the team,” he states.

“It’s unbelievable to be here [with him] again. I’ve known him for more than nine years so he knows that I am here for whatever he needs and I know he is there for whatever I need. We have this kind of relationship so it is really good.”

And what about the boss?

“Working with Jürgen is like having a masterclass!” Matos exclaims.

“I am very pleased and happy for the opportunity to work with the best. Really, Jürgen is not only about understanding football, a player or a youth player, he is more than that, it is how he understands life and its values.

“For me, this fascinating way of seeing things is unbelievable, it’s really unbelievable.

“The way he fills all the game ideas, all the tactical principles, all the team organisation with passion and with love is amazing because that is what gives you the way of playing. It’s been really amazing to work with him.” 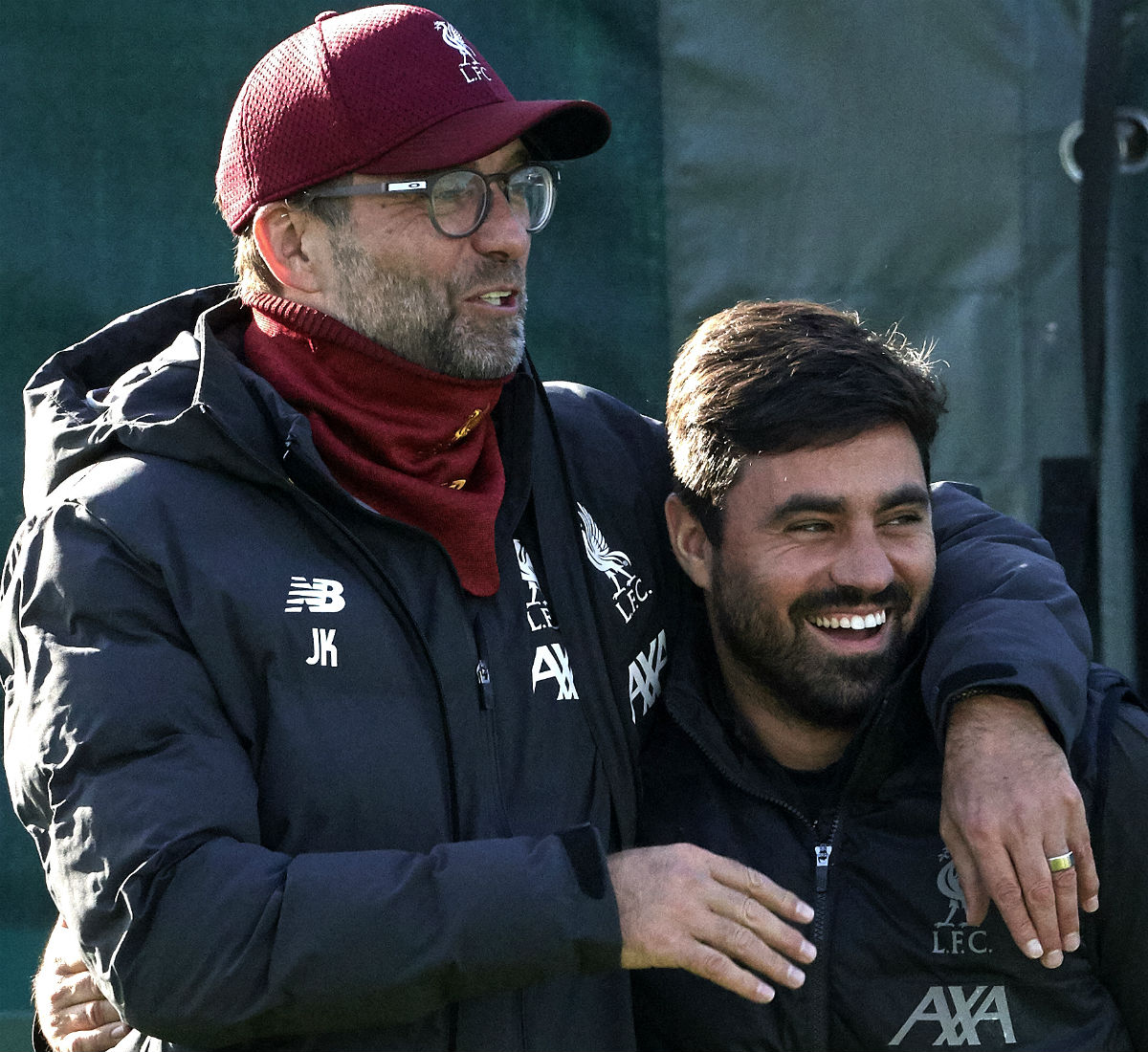 Perhaps a cornerstone of Klopp’s managerial philosophy is his commitment to youth development; to the process of guiding young prospects along a pathway that leads to first-team opportunities and, in some cases, stardom.

Matos believes the advantages of such direction from the top to be enormous.

“For me, for a player to improve and to learn, we need to touch their heart - especially if he’s a young player and with that, Jürgen is incredible,” he says.

“For sure it makes my job easier because the environment that he and all the technical staff create here is amazing for the development of players.

“We can see the development of the first team in the last years and with these first-team players we also have all the young players that are coming through, which is brilliant.” 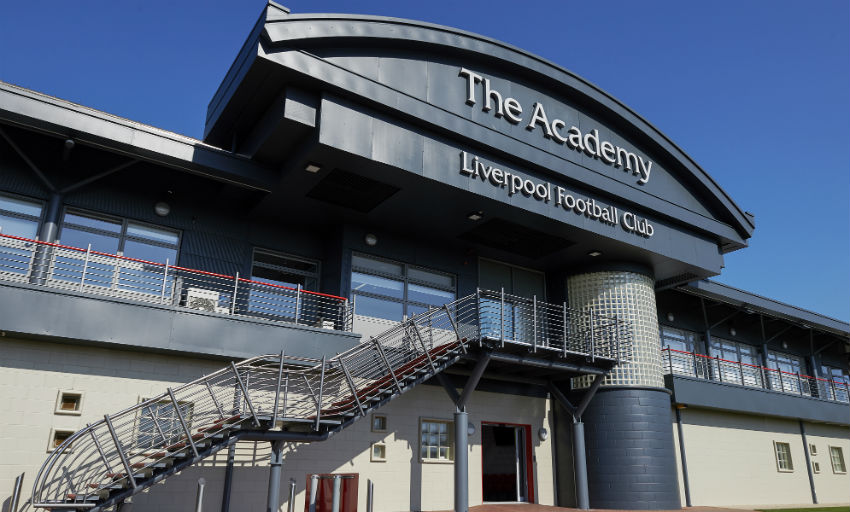 Day to day, Matos’ time is split between Melwood and Kirkby and the relationships he has established at the Academy are, he explains, just as important as those in the senior set-up.

“Right now, before I came here I was in a meeting with Alex [Inglethorpe], Critch [Neil Critchley] and Barry [Lewtas] and we discussed each player detail by detail - where they are at the moment, what we expect in the future,” Matos says.

“These kind of things are great because what I feel is that all the persons in the club are really working hard to help the players’ development in all the best ways and with high standards.

“One of my major goals when I arrived was that I needed to know the Academy staff as well as I know the Melwood staff, especially Alex and the coaches that are responsible for the training sessions.

“These kind of relationships are already really good and more than talking, it’s about creating an environment of trust and an environment that can help everyone - especially, in the end, the players.

“Everyone is working hard to see one player from the Academy in the first team, like Trent. The process that Trent had was unbelievable because he started here as a young player and finished in the first team, so this is the kind of project that we need to find. A perfect project.” 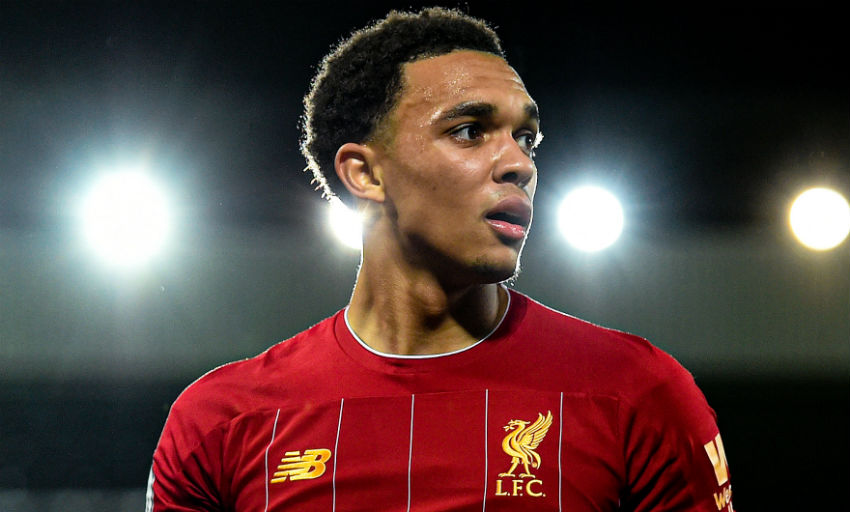 The player pool in which Matos hopes to identify Liverpool’s next ‘perfect project’ is comprised of those nearing first-team squad status, who regularly train at Melwood but predominantly represent the club’s Academy sides.

He elaborates: “This group is not a closed group and others can join too, but it’s the group that we know it will be very important for their development to be here [at Melwood] because it will help them to improve.

“It will be very important to be here because at any opportunity they can perform for the first team - and, at the same time, it’s a way of creating a great relationship between the first team and the Academy.”

Matos’ remit is not restricted to just Melwood and Kirkby, either, with the Portuguese making regular home visits to players in order to form a greater understanding of the individual, not only the footballer.

“When we look to a player, we should look to him as a whole,” he details.

“Yes, we need to see how the player is performing on the pitch but we know that for his development, sometimes the most important thing is not a training session.

“It can be something about where he is living, with who he is living, how he is eating, how his social life is. Knowing these things will help not only to have a perspective of the player but also to understand how he is feeling and doing in his life.

“This is something that I am also really focused on trying to know. The last house I visited was Sepp van den Berg’s and also for the players, for them to know that someone from the first-team technical staff is concerned with how he is living as well as his football life, that is important. 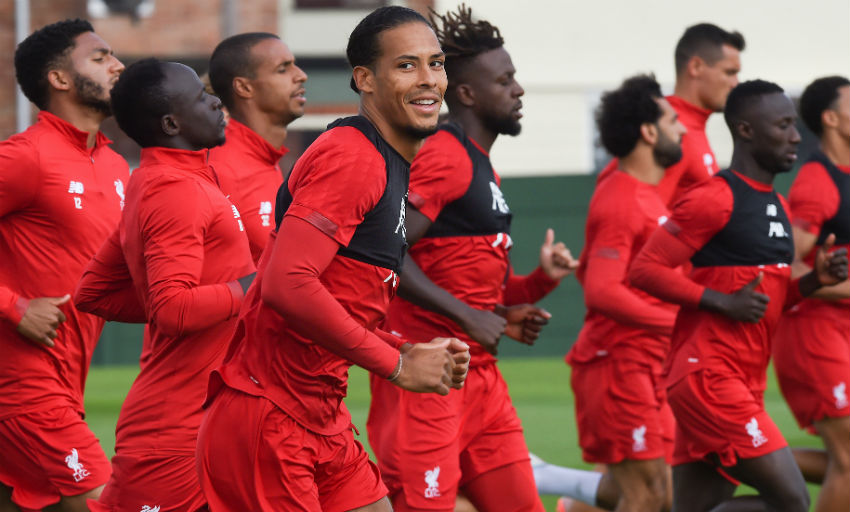 As of next season, of course, Liverpool’s first team will be based at Kirkby too, meaning Klopp’s senior squad will operate from the same site as the Reds’ Academy teams.

This decision, Matos feels, has no downsides.

“The new building and the new infrastructures will be absolutely massive for us. It will help a lot, especially with the flow of information, and it will be very easy to work,” he notes.

“In the same facility we will have first-team players and staff and the talents of the Academy, so they can have these role models near them and that is absolutely amazing.

“This is the kind of place where you can create a culture, where you can start something really special that will give stability and consistency to all the processes in the club.”

The creation of an all-encompassing training complex forms part of the club’s vision for the future - and striving to positively influence what lies ahead forms the foundation of the ethos of its ‘connector’.

“The goal is that we create, or continue the creation of, a new generation of players that will allow the club to move forward while also keeping its high standards,” Matos concludes.

“I believe that a big club with a big history and a big culture always needs to look to the future because if one of the things that is really difficult to achieve is success, it is even more difficult to keep this for a long period of time.

“We have a project where we are building from the youth players to give sustainability for the club, and I am trying to help everyone to achieve this.

“It’s just amazing to be here and to be a part of it.”