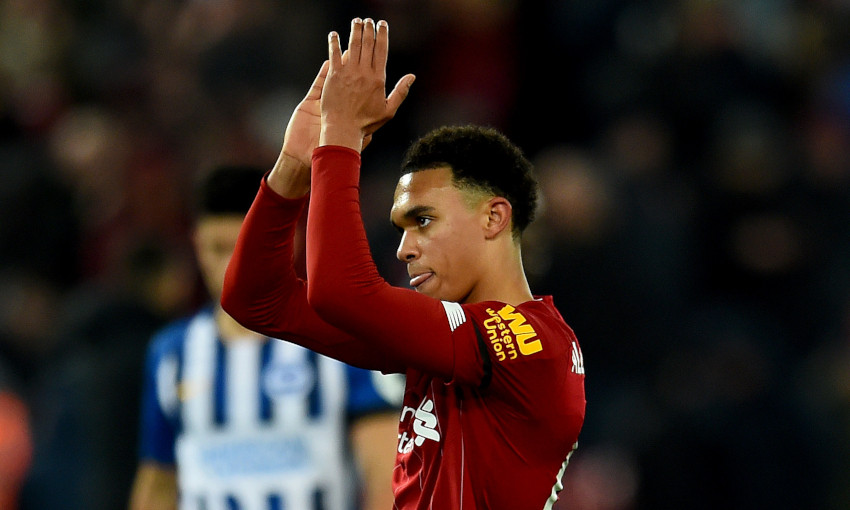 Liverpool's history with the Ballon d'Or

Liverpool strengthened their lead at the top of the Premier League with a 2-1 win over Brighton and Hove Albion on Saturday.

Lewis Dunk pulled a goal back for the away side after Alisson Becker was sent off, but the Reds battled to secure the three points.

It's now 40 points from a possible 42 on offer. Right-back Alexander-Arnold was sorely missed for Wednesday's visit from Napoli. The 21-year-old has few equals in his position from an attacking sense, and he wasted little time proving that once more as he sent in a number of teasing and tantalising crosses for Liverpool to attack. What a gem of a player the Reds have on their hands in this young man from West Derby. The best Academy product since Steven Gerrard 21 years ago, he claimed his second assist of the day before the half-hour mark when Van Dijk nodded in a corner. Alex Oxlade-Chamberlain gave a promising audition for the vacant slot left by the injured Fabinho. The defensive-minded Brazilian is set to miss the best part of the next two months, meaning a spot is available in Klopp's engine room. On this evidence, Oxlade-Chamberlain can expect to fill it with regularity.

Liverpool have proved once again that they can dig deep when required, with a 2-1 win over Brighton seeing them stretch an unbeaten run to 31 games and match a club record. Victory on home soil has lifted the Reds 11 points clear at the top of the table, with another giant stride taken towards a first title triumph in 30 years. Manchester City remain their closest challengers, but the defending champions suffered another wobble in their campaign on Saturday when being held to a 2-2 draw at Newcastle. The current title holders remain the last team to beat Liverpool in Premier League competition, but that success came way back on January 3. Klopp's side have gone 11 months without defeat since then, with 31 hurdles safely negotiated. That stunning sequence has seen the class of 2019-20 emulate the achievements of the club's legendary sides from the 1980s.

Van Dijk is something of a set-piece expert himself. Since the start of last season, no Premier League defender has scored more goals, and again it's no coincidence. Klopp set him a target of improving his goals output, given the massive advantage he has physically. After scoring on his Liverpool debut in 2018, he didn't find the net again that season. But improvement has come, and now he has 10 Liverpool goals. Klopp will demand more though. It's important to carry a threat from set-pieces in games like that. Two goals here, one against Napoli and a winner at Palace in their last three games underline just how important.

The view from Brighton: ‘Potter changed the way they’ve played quite considerably'

The view from Brighton: Bold tactics and brave selections explained