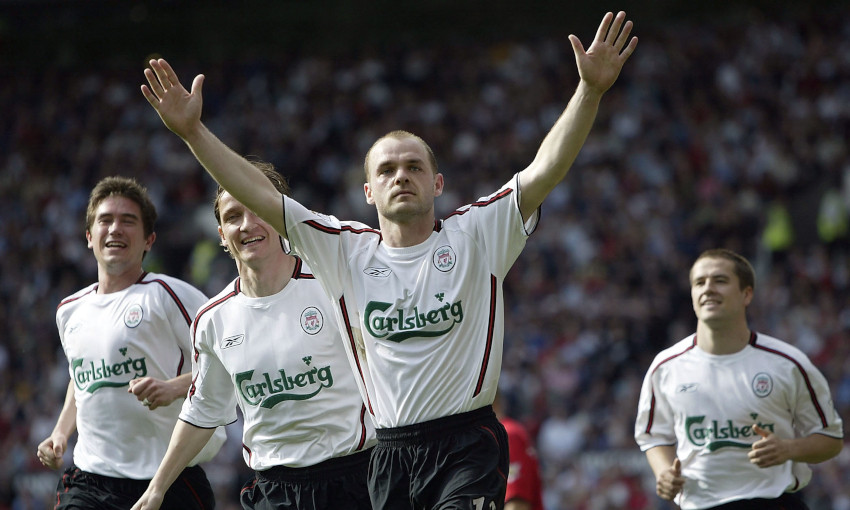 It was enough to make Danny Murphy and his Liverpool teammates laugh.

On April 24, 2004, the Reds midfielder slotted in a second-half penalty to give his side a 1-0 victory over arch-rivals Manchester United at Old Trafford.

It was, remarkably, the third time in four seasons Murphy had scored the only goal of the game in the fixture, coming after a sweet free-kick in December 2000 and a late, morale-boosting strike in January 2002.

So, just how did he do it? On the anniversary of the third of his Old Trafford winners, we caught up with Murphy to discuss one of the most satisfying quirks in Liverpool history…

It’s 16 years today since you scored a third winning goal for Liverpool at Old Trafford. What are your memories now of that game and that period?

I don’t remember exactly how we were getting on at that time, I just remember more about the game in terms of doing our normal prep for the game – good shape, keep frustrating them, knowing we had the quality on the break. And it worked again. Stevie did wonders getting the penalty with his pace and athleticism. The biggest shock was that Michael [Owen] gave me the pen because he was actually on pens that day. The manager said he was on them and that’s fine because it’s Michael and you do as you’re told. But he just gave me the nod, he said, ‘You have it.’ I thought, ‘Lovely’ because any chance of scoring a goal I was absolutely buzzing. So I didn’t really have time to think of the pressure of it or it was the third one or we were going to win if I scored. It was the middle of the second half, so even if you score it might not stay 1-0. 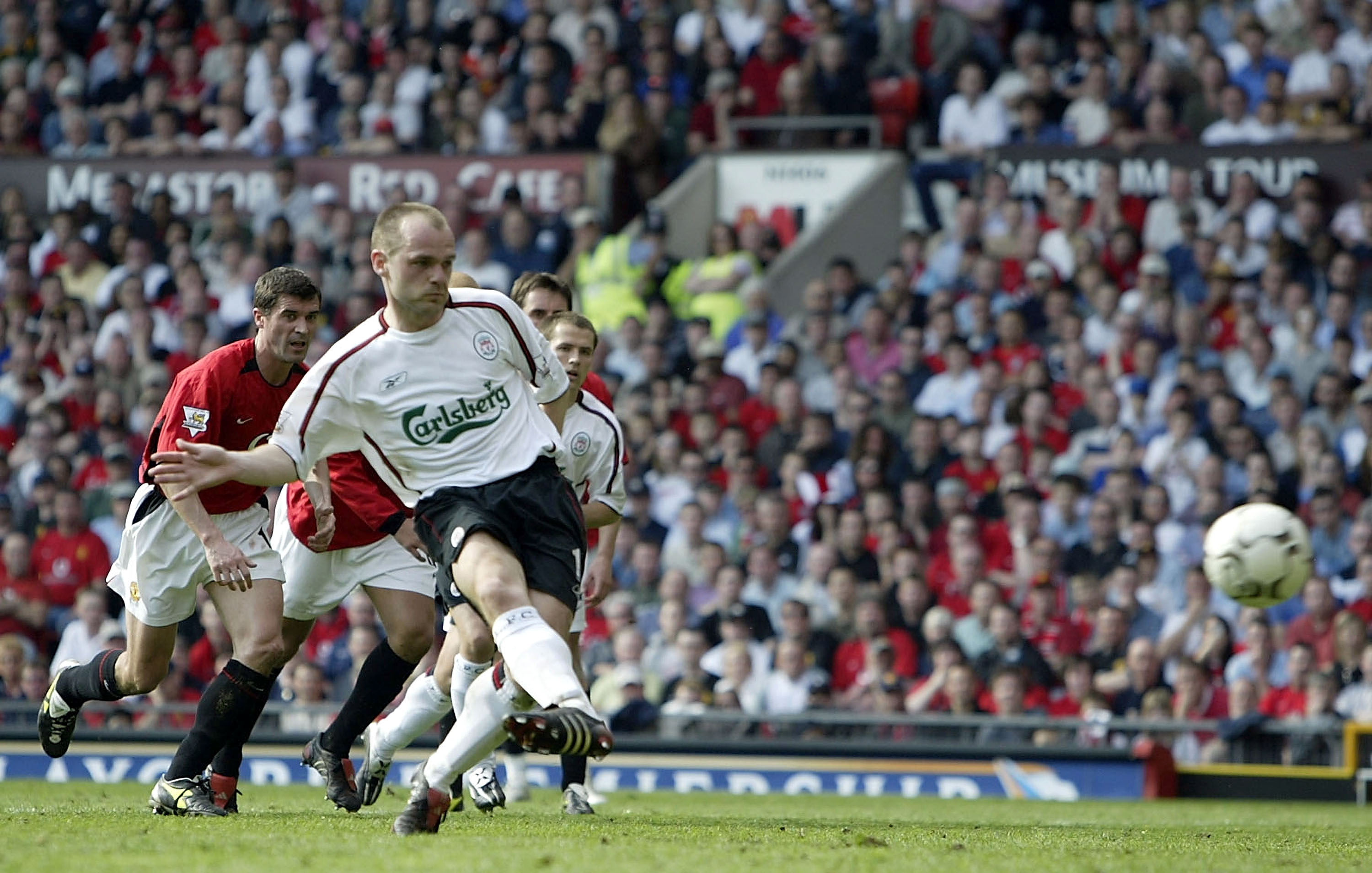 Do you know what, it was different than the other two afterwards when we won. Because I’d experienced winning there a couple of times and scoring there a couple of times, we were actually giggling about it and laughing. We were buzzing we’d won. But from my perspective, some of the lads – Michael, Carra and Stevie – were saying to me, ‘What’s going on here, how have you done it again?’ And I was just like, ‘I don’t know, I really don’t know what’s going on, this is weird!’ Then the phone starts going again.

It was massive winning at United, it always is – you know the score when you play United. But in terms of comparing it to the other two, it didn’t rate as highly for two reasons. One, the fact it was a pen, which I expect to score. And secondly, the other two had more significance. The first one was the first time we’d won there in 10 years and the first time I’d scored there. The second one was a kind of bounce back game for me after I got some stick at Anfield in the Southampton game before the United away game, the second winner. So it meant more to me. The third one, it does mean something to me – let me get it right – but in comparison to the other two, it was just a bit of icing on the cake really.

Can you put your finger on what it was at that time, because you just kept beating United? It seemed like Gerard Houllier and the team had worked something out…

We didn’t get above our station during that time of success we had. United were one of the teams we were trying to emulate and catch, so we always gave them respect. We raised our game, I think. We had a lot of young lads who wanted to be part of a successful Liverpool to try to get above them and overcome them and their success. We always raised our game a little bit.

Our plan was very similar most of the time; we’d play narrow, play compact and we’d let them go round the sides. That was always what we did because United liked to play through you and kill you with their little passing and their cleverness. Generally, the philosophy with Houllier was that if they get the ball wide, even though they’ve got good crossers of the ball – when they had Becks and Giggs and all that – they didn’t really have anybody who was going to head the ball in and outjump Hyypia, Carragher, Henchoz, anyone who was playing at the back. So we used to give up space and width and play narrow and compact – and we were good at it. That’s how we won the UEFA Cup, that’s why we were good in cup competitions, because we knew our limits. We didn’t get lulled into going, ‘They’ve had loads of possession so we’ll run out of position and start pressing them all over the place’ and let them kill us. And, of course, the other thing is, when you get a couple of results away from home at a big club you do go back the next time, if you’ve got the same nucleus of players, and you go into the game [thinking] ‘We’ve done it before, we know we can do it again’, that confidence.

You scored all of the eight penalties you took for Liverpool…

I didn’t take as many as I’d have liked because of Michael – and then Gary Mac turned up! And Gary Mac was a super penalty taker. So I was just happy when I got one! I had a decent record; I think I only missed one for Fulham as well, so I was alright at pens. I remember Carragher talking about pens years ago and Jamie said something that always stuck in my mindset, which is: what’s the worst that can happen? You miss and you’re still in the same position, it’s not like you’re giving a goal away. You’re actually in a great position where you can just pass the ball into the net, it’s a pass into the net. You’ve got a bigger chance of glory than you have of failure. Actually, it’s a chance to get your goals up and I just don’t understand the mentality of anyone who wouldn’t want to take one.

If you had to pick one of the three winners at Old Trafford as your favourite, which would you choose?

The second one. The first one was massive, more as a collective – Liverpool winning there for the first time in 10 seasons. The second one was a personal thing, I wanted so much to get back on side with the fans and to put a bad performance behind me. It sounds a bit selfish but it did mean so much. The celebrations were bigger after the first one, I’ll tell you that much! But the second one, there was a lot going on as well; Houllier was ill and Thommo was in charge. I’d spoken to Houllier the day before the game, who wasn’t in a great place at that point. So it was nice to do it for him as well because Thommo showed faith in me and so did Houllier, in terms of keeping me in the team when they could have left me out after a stinker at the weekend. But more the relationship with the fans really. Once I’d got into the team after a couple of seasons and I started cementing a place, things had gone pretty well. It was my first little bad spell and some disgruntlement, and maybe if I hadn’t put it to bed quickly it might have dragged on longer. 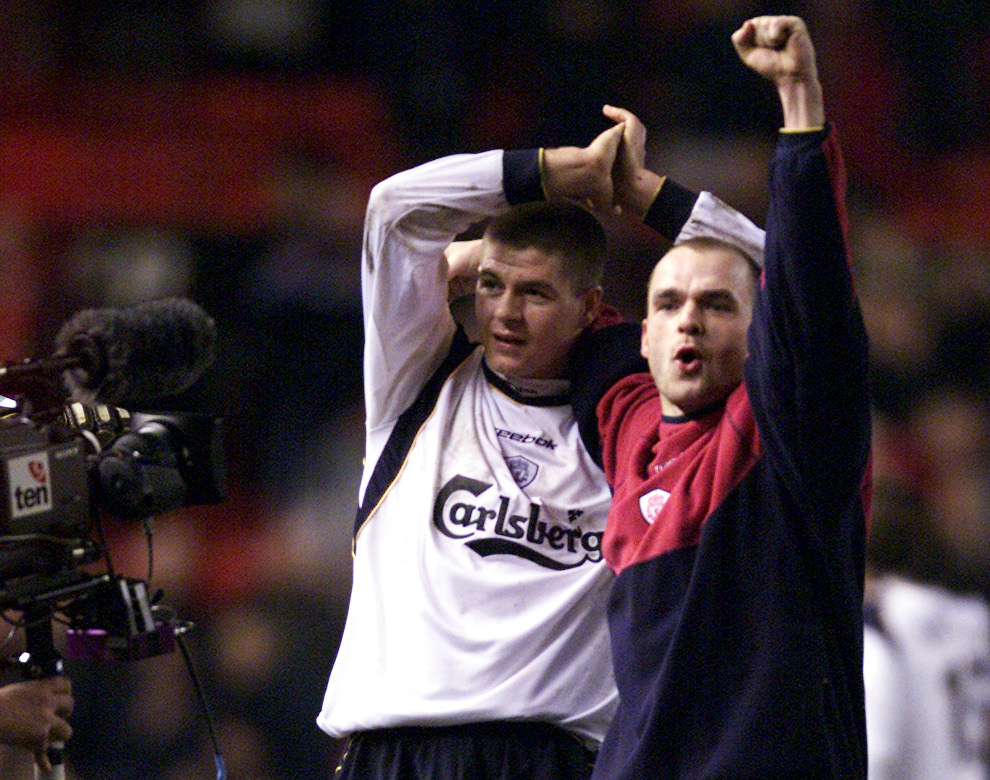 That emotion was evident on your face in those celebrations…

It was nice at the end as well because Thommo, Stevie and I stayed out and went up to the fans – they were all singing my name. There must have been three or four thousand, it was a good firm. All of a sudden, you wake up the next morning and you just can’t wait for the next game.

On this day: Maradona watches Reds secure progress in Europe

10 of the best Liverpool lobs, chips and dinks