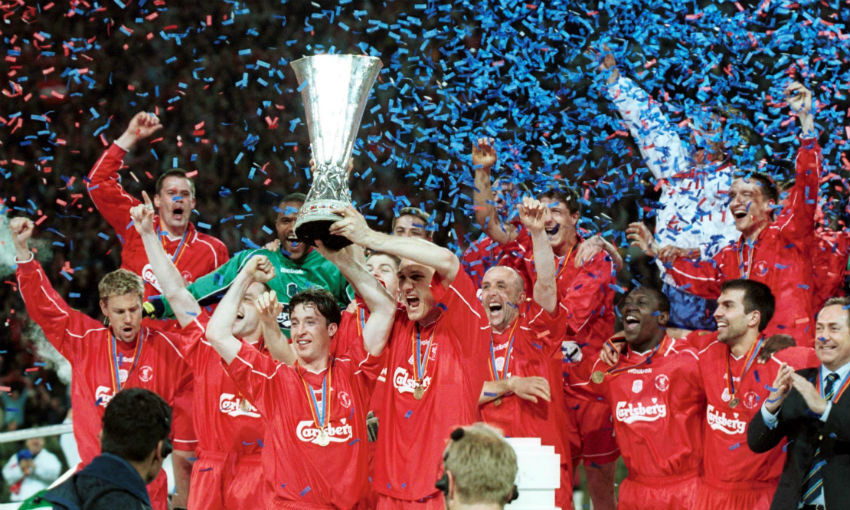 Robbie Fowler remembers the 'incredible' feeling of lifting the UEFA Cup after scoring in an unforgettable final victory on this day in 2001.

Liverpool defeated Alaves 5-4 with a dramatic Golden Goal winner in Dortmund on May 16, 2001.

Doing so meant Gerard Houllier's Reds completed an unprecedented treble of League Cup, FA Cup and UEFA Cup - and Fowler, who came off the bench to put Liverpool 4-3 up late on in normal time, recalls the day fondly.

"When you think of UEFA Cup finals and Champions League finals, I think Liverpool are synonymous with having the best games, obviously the AC Milan one and Alaves," he told friend and former teammate Steve McManaman in an interview for BT Sport.

"I managed to get a goal which should have been the winner, but Jordi Cruyff scored in injury time to make it 4-4 and take it into extra-time."

Gary McAllister's 116th-minute free-kick was inadvertently glanced past his own goalkeeper by Alaves' Delfi Geli to ensure Liverpool won on the Golden Goal rule.

Fowler admitted, though, that the players weren't entirely sure they had won the game.

"I just remember people were a bit puzzled and it was like: 'What happens now?'

"But, from a selfish point of view, for me getting the chance to pick up another trophy [as captain alongside Sami Hyypia] was incredible. It was a real surreal week actually and it was probably one of my best weeks in football.

"I was disappointed not to start in the FA Cup final on the Saturday, we played Alaves on the Wednesday and then we were back home because we had a game away at Charlton Athletic that we needed to win to qualify for the Champions League.

"So that week of football was just incredible."