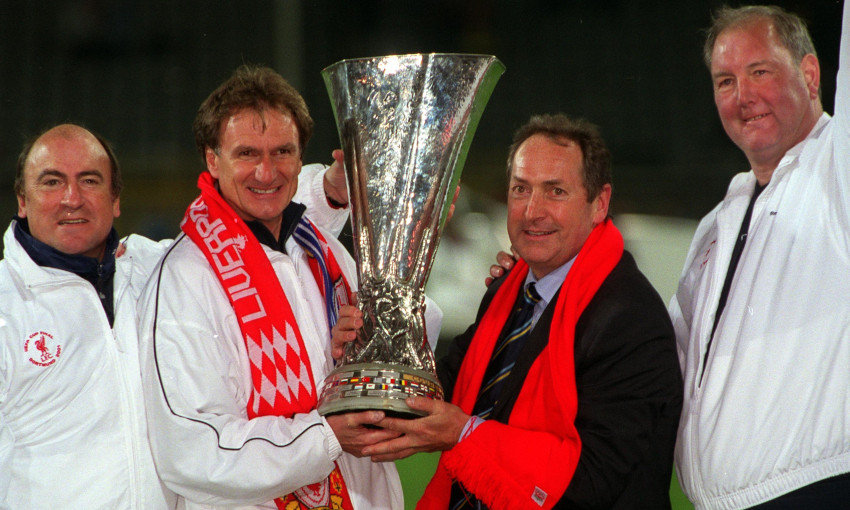 The sight of Jürgen Klopp and his players celebrating in Madrid after winning the European Cup last June brought back poignant memories for Phil Thompson.

Thompson lifted the same trophy himself as Liverpool captain in 1981, and 20 years later he was assistant manager when the club achieved a cup treble under Gerard Houllier.

Before the miracle of Istanbul and the iconic scenes inside the Ataturk Stadium in 2005, the Reds were victorious in another of the most dramatic European finals of all time.

On May 16, 2001, at Borussia Dortmund's Westfalenstadion, Houllier's men eventually defeated Spanish side Alaves 5-4 to hoist aloft the UEFA Cup.

It represented a remarkable third piece of silverware that season, Liverpool having already picked up the League Cup and, four days earlier, the FA Cup.

"It was quite astonishing," Thompson said of the campaign during a conversation with Liverpoolfc.com.

"The way the season set out, you always know you've got the League Cup first, which is the end of February or beginning of March, and it's nice if you can get a trophy in the bag.

"I can remember Gerard Houllier in his team meetings and he kept saying, 'Crack this first trophy and things will be a lot easier.'

"We were playing in two-legged European games as well and the journey was moving on.

"We had these great cup games and we beat Birmingham City to win the League Cup and we still had Champions League football to play for."

After qualifying for the FA Cup final, the Reds' form was patchy in the Premier League. A 1-1 draw away at Ipswich Town was followed by a 2-1 Anfield defeat against Leeds United during which Steven Gerrard was sent off.

Without their inspirational Scouse youngster, Houllier's side headed to Goodison Park for the Merseyside derby; and a classic encounter was settled by a stroke of genius from Gary McAllister.

Thompson credits the dramatic 3-2 win across Stanley Park for shifting momentum back in Liverpool's favour as the run-in picked up pace.

"It was massive and nobody will forget Gary's free-kick," he said.

"I was actually in Madrid when we won our sixth European Cup and I was watching the team train the night before the game. All of a sudden a guy comes up to me, taps me on the shoulder in the stand and he said, 'You don't remember me, do you?'

"I said, 'I certainly do, Gregory Vignal!' I told him, 'You know what you are most famous for? Winning us the free-kick that led to Gary Mac's winner!'

"I said, 'You went marauding forward about 40 yards from goal, you were brought down and then what Gary did, the rest is history!' That was 40 yards out and Gary took the ball at least five yards forward before he put it in!

"That was sensational and it gave us a lift. We were down to 10 men and we thought everything was going against us and that moment flipped it the other way."

McAllister was at it again in the following game as his penalty ensured Liverpool reached the final of the UEFA Cup with a 1-0 win over Barcelona at Anfield.

After the defeat by Leeds, the Reds went on to win nine of their remaining 10 games that season, a 2-2 home draw with Chelsea the only slight blip.

Michael Owen's heroics against Arsenal at the Millennium Stadium clinched the FA Cup, and it was then off to Dortmund and a meeting with Spanish underdogs Alaves.

"[There was] a generation of Liverpool fans who had never been to a European final and only heard the stories from their dads and grandads, so it was quite an unbelievable occasion," Thompson recalled.

The Reds started well, going 2-0 up inside the opening 16 minutes.

"The game was quite unique," he continued. "We knew they would play three at the back or five at the back, if you like, and we took advantage of that.

"We started off like a train and it looked like we were going to score with every attack.

"When we went 2-0 up, fair play to their manager, he changed it to a back four and it seemed to turn the tide and made them a lot more solid and they pulled a goal back.

"Gary McAllister netted a penalty to put us 3-1 up. I didn't have too many of these games during my time with Gerard, when no matter what we did or what we discussed, we didn't know which way this game was going to go.

"It was the most fascinating but nerve-wracking game sitting in that dugout and it was going end to end.

"We did a get bit complacent, which allowed them back in it, and then Robbie Fowler came on to make it 4-3 before they scored right at the end." 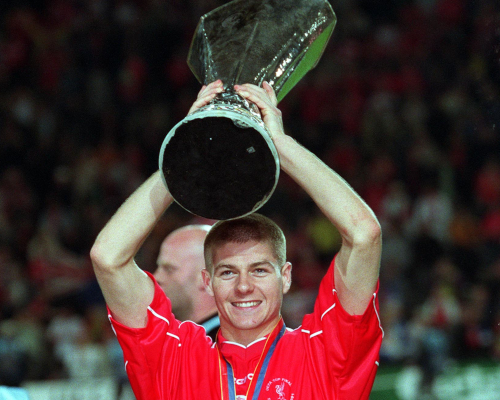 The name Delfi Geli is etched into the memories of Kopites. It was his unfortunate Golden Goal that handed Liverpool the UEFA Cup and, ultimately, the treble.

Thompson explained there was confusion on and off the field as players and coaches did not actually realise the game was over.

"It didn't last long the Golden Goal, did it? But it's been quite unique in our history," he said.

"As the game was getting near the end of extra-time, I'm thinking, 'Right Phil, it’s time to get your thinking head on here' and wondering who was going to take the penalties for us.

"Just as I'm writing down our penalty takers, their fella fouls on the left wing and they have another man sent off. So I have to take another one of our players off the penalty takers list!

"I actually still have my piece of paper with the penalty takers written down to this day!

"Gary then floats the free-kick in and it comes off the top of Geli's head and into the bottom corner of the net.

"We on the bench wheeled off and ran but Patrice Bergues, our French coach, he said, 'Where are they all running, celebrating? The game is not finished yet!'

"The celebrations at the end on the pitch were just absolutely incredible.

"We were all standing together in front of our crowd singing You'll Never Walk Alone and now, after seeing us last season against Barcelona, it seems like it has become part of the thing to line up in front of the fans.

"Our win in 2001 in Dortmund set a precedent of what was to come. To win the treble was just fantastic, though."

"Even the Arsenal game in the FA Cup final, you know in football you win games that you shouldn't and that's what that was," he acknowledged.

"I don't look back and say that was dreadful of us because I played in enough games as a player for this club, and there were many games where a team that shouldn't be winning that game wins it.

"I remember when Arsenal played Manchester United in the FA Cup final a few years later and United battered them off the park before Arsenal won on penalties.

"I always say to Paul Merson and Charlie Nicholas on Soccer Saturday, that was you robbing that game so don't ever have a go at us for winning in 2001!" 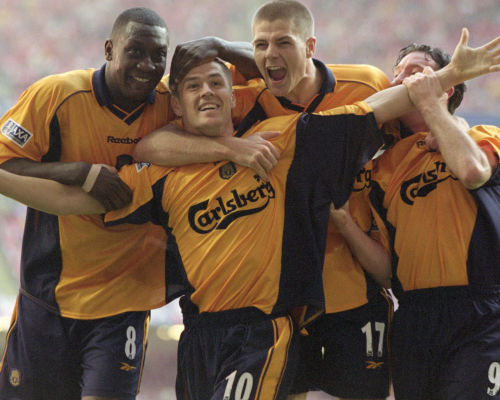 With Wembley out of action, Liverpool sealed their first two trophies of the treble season at Cardiff's Millennium Stadium.

"Cardiff was wonderful, I love Cardiff," Thompson said. "It was a proper full stadium and the acoustics in there were just sensational.

"All the pubs, bars and restaurants, everybody knew one or another when we went back and Cardiff was so welcoming for us.

"One of the best memories that will never leave me from Cardiff is how well we played when we beat Manchester United to win the League Cup in 2003."

Assessing the 2000-01 exploits as a whole, Thompson hailed Houllier for simultaneously making the Liverpool supporters happy and putting the club back on the European map.

"Looking back at the treble season, it's something we will never forget and we shouldn't forget it," he concluded.

"It hurts me sometimes that Gerard doesn't get the acclaim that he should do for that season.

"That team we had, though, it was absolutely amazing and the emotional journey that we all went on.

"We had players like Steven Gerrard, Michael Owen, Jamie Carragher, Robbie Fowler, all local Academy lads and it was phenomenal.

"The games we played, the emotions we went through, it was just an absolute pleasure to be involved in that."