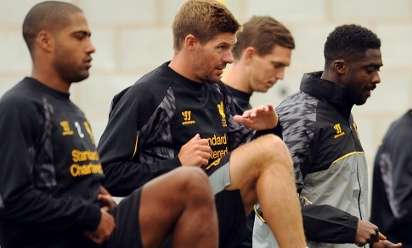 Head of performance Glen Driscoll has outlined exactly how he and the coaching staff will be doing all they can to ensure Liverpool get off to a flying start to 2013-14.

The Reds endured a difficult beginning to last season after being handed a tough set of opening fixtures during what was a transitional period at Melwood.

However, Liverpool produced some outstanding football following the turn of the year and scored goals aplenty in a run that saw them lose just one of their final 12 league games.

It's the kind of form that can be produced - if not bettered - once again, according to Driscoll, as he and his team work assiduously to get the players in peak condition for the season-opener against Stoke City on August 17.

In a wide-ranging interview with Liverpoolfc.com at Melwood, Driscoll explained the methods and science behind the pre-season work and explained why he's confident lessons have been learned from last year...

Glen, pre-season training is underway. What kind of condition did the lads return to Melwood in?

Very good, generally. I'd say these days, players do look after themselves when they're away from the club and we've probably come back better than we did last season for a number of reasons. It always helps when you've got a manager in place and the targets we set at the end of last season have to be adhered to.

The players get back and they have to make sure they're within the targets we set them, otherwise they have extra sessions in order to do so. There's always an incentive for them to come back in good shape.

Do you and the other members of the sports science team keep a check on the players over the summer?

When on holiday, they generally have two weeks when they have their free time - but as I said, because of the target setting, it looks after itself. There will be some information going to and fro and they'll have their programmes that will make sure they come back in good condition.

What kind of checks did you put the players through on their first day back?

This season we did bloods, cardiology screening, an optician screen and they did some isokinetic testing. Generally, the players will also go through a musculoskeletal screen and physiologically we did the aerobic tests - the yo-yo test - for six minutes to get an idea of how aerobically fit they were. Then there was also a strength and power profiling screen. It's all information we'll use throughout the season.

Were you pleased with the results?

Yes. As I said, we think players have come back in pretty good condition, which actually helps us do more earlier in pre-season and will have a knock-on effect as pre-season goes on.

Will individual programmes be drawn up for each player this pre-season?

Based on the screening, each player will have their own programme. Generally, the programmes are tailored towards their previous history and the performance criteria they have to hit based on their positions. But a lot of the time, what we do here is football. There may be some players we modify and we'll always be using science to keep tabs on them throughout.

Do the players themselves have any kind of input into the plans?

Yes, they do. Other than the targets we set them, we basically ask them areas where they feel they can strengthen and areas of weaknesses they feel they have. Ultimately, we tailor a pretty holistic programme for them.

How do the programmes differ from player to player? For example, how would Simon Mignolet's be different to Steven Gerrard's?

The programmes will differ in relation to their position and the areas we need to improve on after the profiling we did, as well as their injury history. Based on other variables - such as their age - we'll gauge what we're doing on the football pitch.

How will preparations differ from week to week leading up to the season?

This pre-season, we'll have two weeks of doubles [training sessions]. Then we'll go on tour for two weeks. Really, the whole point of pre-season is to get the players able to cope with 90 minutes of football without injury - and that's why we do doubles. It enables us to increase the volume and modify the intensity so we can get them fast-tracked into achieving that fitness.

The reason we want to get them to that level of fitness and able to hit 90 minutes of football as quick as possible is because, by the time the season starts, we want them on a rhythm of games. So, come Stoke in our first Premier League game, it'll be like their fourth game - and then we're up and running.

Is there anything you can take from last year into this year and ensure we hit the ground running when the season starts?

Last season had its difficulties for a couple of reasons. We had the European Championships, so a lot of the players were coming back a lot later than they have this season. That happens to all big clubs, of course. We were also in a transition with the medical and science department and there was a process of change with the fitness and conditioning teams - that may have had an effect. This pre-season we have no excuses and we will make sure we are up and running and ready to go for the first game.

So what kind of things will we be doing to try and get an advantage over our rivals at the start of the season?

Four new signings so far this summer - how are they settling in?

Really well. It's always great to have new faces - it freshens things up. You have to be more vigilant in the monitoring with new players because the intensity of training may be higher than they expect. They're new to us, so we keep an eye on them.

A few players ended last season on the treatment table - how are they?

Sturridge is the only player in the squad not training due to injury. He is progressing well and is still on target to return for the start of the season.