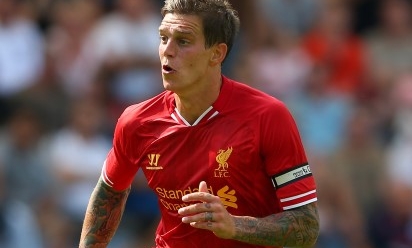 Liverpool boss Brendan Rodgers has today revealed that centre-back Daniel Agger has been appointed as the club's new vice-captain.

The Danish defender replaces Jamie Carragher in the role following the 35-year-old's retirement at the conclusion of the 2012-13 campaign.

Rodgers revealed in July that he was considering a number of candidates for the position and he confirmed the decision to appoint Agger before the Reds departed for Dublin on Friday.

Rodgers told LFC TV: "The job of the captain and vice-captain here at Liverpool is very, very important.

"I wanted to give myself time over the course of the pre-season to assess a number of the players and obviously Daniel was one of them.

"His loyalty and his passion for Liverpool is second to none. And if you add that on to his footballing qualities, then I think it's a good choice for everybody."

The 28-year-old joined the club in January 2006 from Brondby and has since made a total of 209 appearances in Liverpool colours, scoring 12 goals.

Agger played in the 2007 Champions League final and collected his first major trophy at Anfield when the Reds won the 2011-12 League Cup at Wembley.

The Denmark skipper signed a new long-term contract with the Reds in October 2012 and played 35 league matches last season - his highest since joining the club.