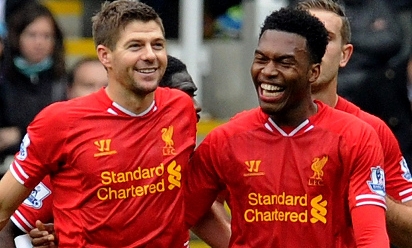 Lucas: Where United tie will be decided

He christened Philippe Coutinho 'David Blaine' earlier this season for his magical ball skills, and now Daniel Sturridge has conjured up another nickname for one of his teammates…

The striker has revealed he's given Steven Gerrard the moniker 'James Bond' around Melwood due to the captain's world-class talents.

"He doesn't like it, but I call him that because he can do everything," Sturridge said.

"On a day-to-day basis in training, you have to see it to believe what he can do with a football.

"I've grown up with Jordan Henderson in international age groups, Raheem Sterling is like a little brother and I'm very close to him, Glen Johnson is a top-class player and then there's James Bond... Stevie has got the lot, hasn't he?

"If ever there was a player who deserved to finish his career with a Premier League winner's medal or a World Cup winner's medal it's Steve Gerrard."