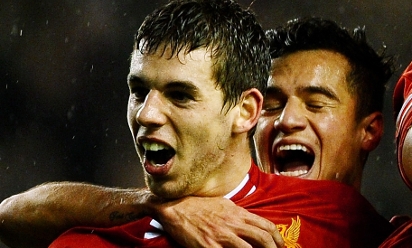 The 21-year-old has excelled since breaking into the first team last November and turned in the latest in a line of mature performances against Manchester United, with the right-footer operating on the left side of defence.

Rodgers believes such form owes much to Flanagan's mentality and his determination to prove his worth at Anfield.

The boss said: "He has been outstanding.

"He reminded me of Steve Nicol against Manchester United on Sunday - a right-footed player on the left side, steady, aggressive, no fear.

"It's great when you see a young player develop like that.

"You can see the confidence he has now. He has made himself an important member of the squad.

"He's only very young but his performance levels are so mature. I think the biggest thing for me has been his temperament.

"He never really featured at all at the start. Jose Enrique and others were considered in front of him, but the most impressive thing for me was that the kid just kept going. He showed his determination.

"How I work is, I will always give players an opportunity. I will never disregard players early. They will always have a chance to show that they care and they can improve, and that is what he's done."

Rodgers believes Flanagan's fellow full-back, Glen Johnson, was also worthy of praise for his role in the 3-0 win over United.

"I thought the two full-backs were immense," said the manager.

"Juan Mata had to change sides after 15 minutes and Adnan Januzaj ended up getting taken off.

"Glen's performance was outstanding. Now he's rid of his injury, you can see the flexibility in his running and movement.

He added: "Simon Mignolet is continuing to improve and he made one very good save. Not many 'keepers go to Old Trafford and keep a clean sheet."