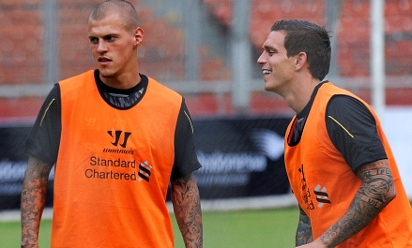 Rodgers: He reminded me of Steve Nicol

The pair combined to assist in shut outs at both Southampton and Manchester United, providing the solid base for the Reds' attacking players to go on and secure a pair of 3-0 wins.

"Both Martin and Daniel have been absolutely excellent," Rodgers told the Liverpool Echo.

"They coped really well against Southampton - a team who score goals and pose a real threat.

"Our two centre-halves were also real pillars and strongholds of the team in the win at Old Trafford.

"As a team we worked tirelessly defensively to limit United to one shot on target - their lowest total at Old Trafford for five years.

"We will continue to look to play an aggressive, attacking game. We've scored more goals than anyone but it's equally important for us to defend."