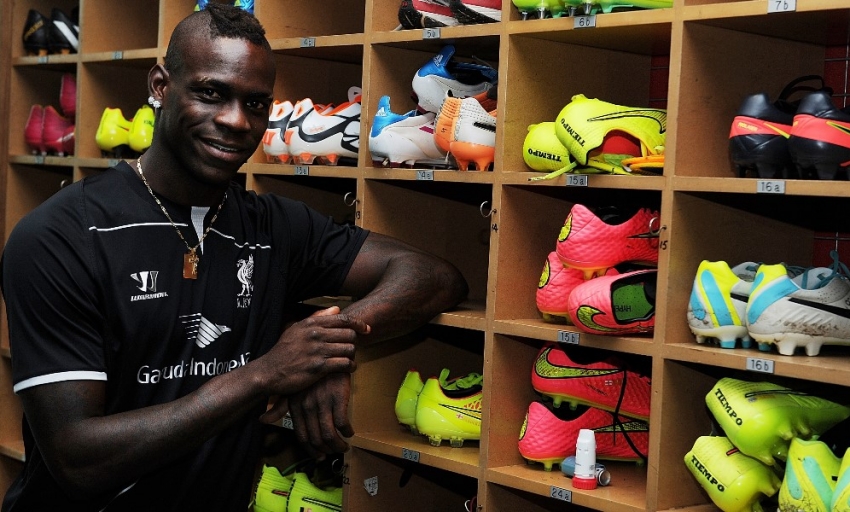 Mario Balotelli took the next step in his hugely successful career when he sealed a move to Liverpool today, subject to registration. Learn more about how he arrived here with our in-depth profile of the striker.

Liverpool's exhilarating attack was bolstered with more firepower as the club added Mario Balotelli to their options upfront in August 2014.

The 24-year-old became the ninth acquisition in a very successful transfer window for the Reds, who achieved their designs of building a stronger squad.

Rated as one of football's premier talents, Balotelli has already amassed 33 caps for Italy and has undertaken three international tournaments - the 2012 European Championship, 2013 Confederations Cup and this year's World Cup in Brazil.

Blessed with power, athleticism and incredible technical ability, the striker waited until his 18th birthday before he could officially represent the Azzurri due to the country's immigration laws.

He was born in Palermo on August 12 1990 to Ghanaian settlers Thomas and Rose Barwuah, but was taken in by the Balotelli family before he turned three after a lengthy spell in hospital for an intestinal problem.

Football was a fundamental part of the forward's early years in Brescia, when he would mischievously kick his ball into the glass window panes at home, as he honed his power. At nine, he joined his local lower league side Lumezzane and was handed his debut with the first team when he was just 15. Balotelli dummied his defender that day and a year later, he was snapped up by Inter Milan on loan, with the Serie A giants buying him outright in 2007.

On his full debut, the gifted hitman netted twice in a 4-1 Coppa Italia win over Reggina. In his first season with the Italian powerhouses, 'Super Mario' scored seven goals in 15 appearances, which included a brace against Juventus in the Coppa Italia quarter-finals, and an important strike in the 2008 Supercoppa final triumph over Roma.

Balotelli's contributions grew by the season and at the age of 19, he was transferred to Manchester City for £24m, where he was reunited with his first manager at Inter and the one who advanced his talents to the senior team, Roberto Mancini.

The striker was off the mark on his debut in the Europa League, which was the winning effort away to Politehnica Timisoara. Knee surgery then delayed his impact at City, but the instinctive attacker won the 2010 Golden Boy award, given to the most outstanding young talent in Europe.

He followed that up by securing his first Barclays Premier League hat-trick in a 4-0 victory over Aston Villa on December 28. And when the club won their first trophy in 35 years, it was inspired by a Man of the Match performance from Balotelli against Stoke City in the 2011 FA Cup final.

In the 2011-12 campaign, Super Mario was in scintillating form in what was the game of the season - City's 6-1 thrashing of Manchester United. He bagged the opening two goals in the decisive triumph, the first of which he has credited as one of his favourites.

Mancini's charges ended the term with the silverware they most craved, with Balotelli supplying the assist for Sergio Aguero's 94th-minute strike against Queens Park Rangers, which clinched the championship. It was City's first title triumph since 1968.

He netted 30 goals in 80 appearances for the Manchester outfit and on January 31 2013, a return to Italy was formalised when Balotelli was unveiled as an AC Milan player. Again, he scored on his debut - both goals in a 2-1 victory over Udinese, which included a late penalty.

Balotelli is steely from the spot, and missed his first competitive pressure kick only last year, which was thwarted by former Liverpool goalkeeper Pepe Reina while at Napoli.

The Italy star's set-piece prowess was also on show for the Rossoneri, with a robust 30-yard free-kick against Parma a pick of the highlights. He managed 12 goals in 13 appearances in his first season with Milan, helping them qualify for the Champions League.

Balotelli continued to impress from distance in the last campaign, with another rocket from range launched against Livorno.

Meanwhile, at international level, he has contributed key goals in crucial games. The brace he secured in the opening 40 minutes of the 2-1 semi-final win over Germany in Euro 2012 is one of the standout displays of the forward's career. More important goals followed in the 2013 Confederations Cup and in qualifying for the World Cup in Brazil, where he would eventually clinch the winner in the group game against England.

At 24, Balotelli's accolades include a Champions League winners' medal, a treble of Serie A titles, Coppa Italia and the Supercoppa Italiana - all secured with Inter - as well as Premier League, FA Cup and Community Shield honours with City.

He now has the platform to fulfil his potential at Liverpool and engineer continued excellence under the tutelage of Brendan Rodgers, who has the talent of extracting the best out of players.