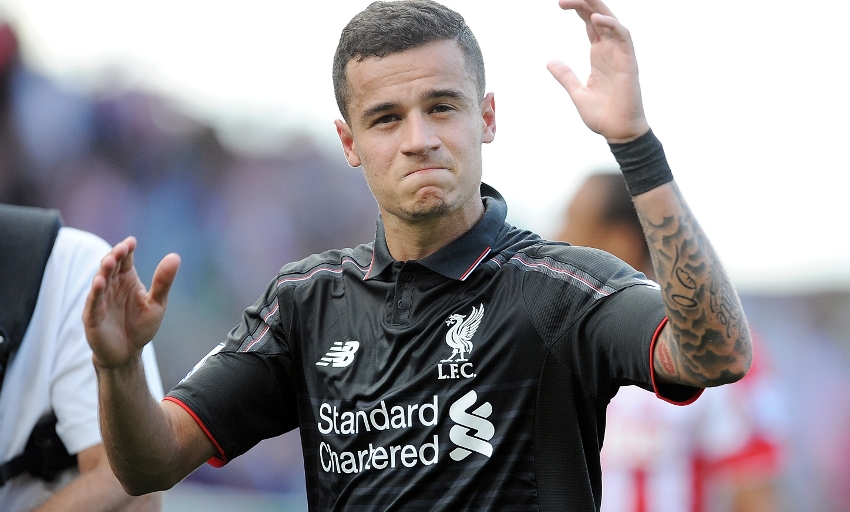 Philippe Coutinho has been backed to establish himself as a key man for both Liverpool and Brazil by legendary midfielder Kaka.

The 23-year-old added to his collection of memorable Reds goals with a sweetly-struck late winner against Stoke City at the weekend, which ensured Brendan Rodgers' team made a winning start to the new league season.

The playmaker's teammates and manager have since showered him with praise, paying tribute to his growing influence at Anfield.

Former Ballon d'Or winner Kaka has also noticed his compatriot's emergence as a Barclays Premier League star and is adamant he has the potential to lead both club and country to glory in the coming years.

“I have been a big admirer of Coutinho and he can be a very important player for Liverpool and Brazil," he told The Mirror.

“There will be a lot of expectation on him with Liverpool fighting to get back into the Champions League, but I know that he can handle it.

The last-gasp nature and sheer quality of Coutinho's strike against the Potters was somewhat reminiscent of a number of former captain Steven Gerrard's contributions to Anfield folklore down the years.

And while Kaka, who now lines up against the Liverpool legend in Major League Soccer, admits such a figure is impossible to replace, he believes his fellow Brazilian can at least help take up some of the responsibility.

He added: “Coutinho is a humble guy. He won't talk about being able to replace a legend like Steven Gerrard, and the truth is nobody could ever replace him, but with Gerrard gone they do need somebody to step up - and he can do that.”

The Reds added another samba star to their ranks by signing Roberto Firmino from Hoffenheim over the summer.

Kaka expects the forward, who made his Premier League debut from the bench against Stoke, to make a big impact as he settles into a new league.

"Firmino will be a big player for Liverpool, too, and will have a good relationship on the field with Coutinho, but the fans must give him time," the former AC Milan and Real Madrid man said.

"You must remember he is adjusting to a new league and that always takes time.”