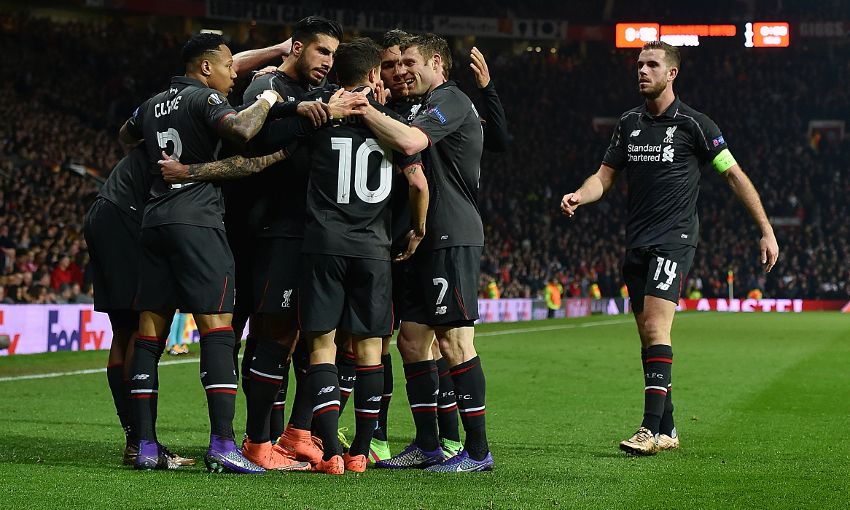 The Brazil forward struck a sublime effort in first-half injury-time to leave the hosts needing to score three more times after Anthony Martial had given them hope from the penalty spot.

There were further chances for the Reds to win on the night, but they progressed into the last eight 3-1 on aggregate.

Jürgen Klopp made just one change to his starting line-up to the side deployed in last week’s first leg as James Milner came in to replace the injured Alberto Moreno. The England international slotted in on the left of the four-man defence.

The game got underway with United’s early intention to play at high intensity clear under the floodlights; however, buoyed by a vocal gathering of over 3,000 supporters in the away section, Liverpool settled confidently into the early exchanges.

That said, the first chance of the game fell to the home side with 18 minutes on the clock when Jesse Lingard found himself in space to meet a deep cross with a powerful close-range header that Simon Mignolet did brilliantly to repel.

The resulting corner created more danger for the Reds, which subsided when Juan Mata scuffed a half-volley wide of the far post through a crowded area.

On 28 minutes, Liverpool fired their first shot in on David de Gea’s goal when a speedy counter resulted in Roberto Firmino allowing Adam Lallana’s low ball to run for Coutinho, but his low spinner towards the bottom corner was repelled by the left glove of United’s stopper.

But shortly after, United put themselves back in the tie. A wayward pass inside from the left from Coutinho was collected by Mata, who slipped it to Martial. The striker attempted to skip around the challenge of Nathaniel Clyne, but was tripped resulting in a penalty for the hosts.

It was Martial who elected to take the spot-kick himself and made no mistake with a powerful finish from 12 yards.

Liverpool’s riposte saw Daniel Sturridge rattle the crossbar with a free-kick from the right moments after, before Jordan Henderson spurned a glorious chance after a well-worked move played him into open space inside the box, but he clipped over the bar first time.

At the other end, Marcus Rojo hooked inches wide of goal from point-blank range after Marouane Fellaini’s header back into the danger zone was pounced upon by his teammate.

However, Liverpool grabbed that all-important away goal in first-half stoppage-time with a goal of outstanding individual quality. Coutinho scampered away down the left to meet Milner’s low ball forward. The Brazilian then evaded Guillermo Varela with ease before nonchalantly flicking the ball over De Gea to send the travelling Kop wild with delight.

Coutinho’s strike seconds before the half-time whistle had noticeably dampened the home fans’ optimism, with the decibel levels dropping a few notches.

Still, Liverpool were well aware of the danger of giving United anything to cheer about – and they were glad to see Fellaini head straight into Mignolet’s arms just before the hour mark from a central position.

At the other end, more magic from Coutinho dissected the opposition, with a jinking run taking out three defenders before he teed up Sturridge, who slammed wide of the near upright.

With 67 minutes elapsed, Sturridge was withdrawn and replaced by Divock Origi before Joe Allen took the place of Henderson.

With United needing to pour forward to try and reduce the arrears, the Reds were looking threatening on the break – and Coutinho perhaps should have done better when he collected Emre Can’s back heel inside the box, but struck straight at De Gea.

The No.10 was then thwarted by the fingertips of the Spanish goalkeeper when his edge-of-the-box blast was pushed over the crossbar.

There were further chances for Liverpool, but Coutinho’s stunner ultimately proved enough to secure the victory.