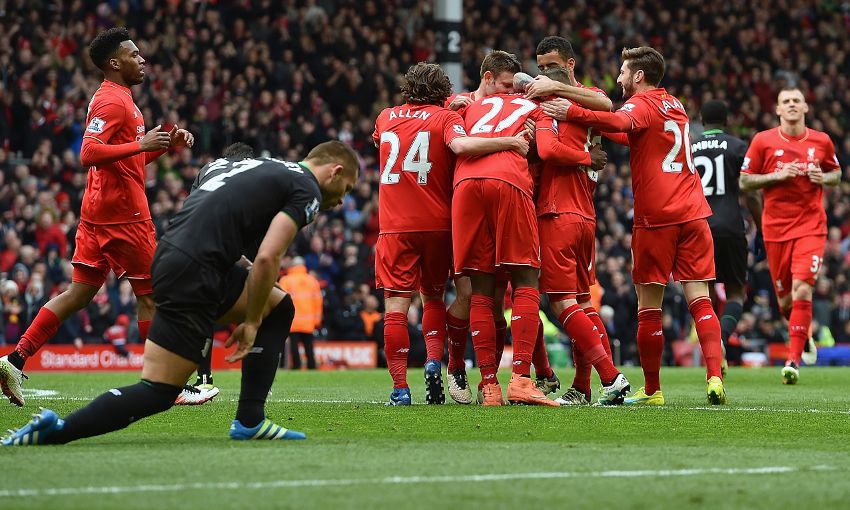 Just three days after a 1-1 draw with Borussia Dortmund in Germany, Jürgen Klopp made seven changes to his starting XI for the Barclays Premier League visit of the Potters.

There was little sign of unfamiliarity among the line-up, however, as the hosts struck four to run out comfortable winners on Merseyside.

Allen, who played 45 minutes in Dortmund and was a starter on this occasion, was delighted to see the Reds' squad used to its full potential.

"You can't ask for much more than that: a great win, a great performance from start to finish," he told Liverpoolfc.com.

"[We had] a bit of a scare with the equaliser but came through that and got four good goals.

"We talked about [the changes] a lot but it's something we've always had faith in, our strength in depth.

"It's great when you can make those sorts of changes and still put on a performance like that."

On the ovation he received upon being substituted late on, the Welshman remarked: "It's special to get that sort of reception from the crowd, so I'm grateful for that."

Allen admitted keeping minds focused on the task at hand ahead of the meeting with Stoke was difficult in the aftermath of a big night at the Westfalenstadion.

But he insisted the Reds can now head into Thursday's return fixture at Anfield full of confidence.

"It's difficult when you've got a game in between an exciting tie like the one we've got, but we wanted to focus on today and make sure we didn't have one eye on that game," he added.

"But we can celebrate today's game and turn our attentions now to what will be a massive game on Thursday.

"It's a stellar tie against a very tough team but we went out there and gave a good account of ourselves and got a good result.

"So I think the onus is on them now to come to Anfield and it certainly won't be easy for them."

The 26-year-old also reserved special praise for teammate Divock Origi, whose three goals last week proved crucial to the draw with Dortmund and win against Stoke.

"He's been incredible all year," the midfielder said.

"To be able to bring him on at half-time the way we could today made it difficult for Stoke, they wouldn't have enjoyed that.

"Two more goals for him so hopefully he can keep that going now."