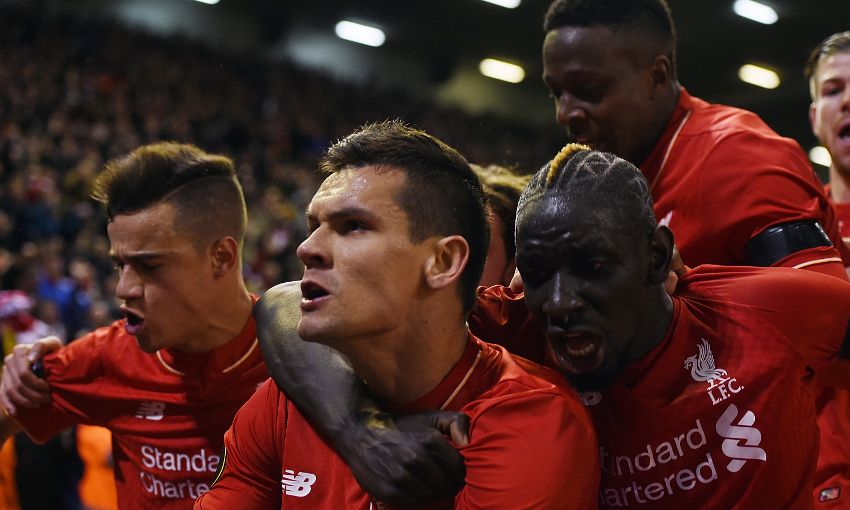 Liverpool produced one of their greatest European comebacks to somehow defeat Borussia Dortmund 4-3 at Anfield and progress to the Europa League semi-finals on Thursday night.

Despite requiring three goals in the final half-hour of the tie to overcome their classy opponents, Jürgen Klopp’s team defied the odds and Dejan Lovren nodded home a sensational winner in stoppage-time.

The hosts had been stunned by goals from Henrikh Mkhitaryan and Pierre-Emerick Aubameyang inside the opening nine minutes, a double blow which swung the tie firmly in the visitors’ favour.

Divock Origi halved the deficit moments into the second half and Marco Reus restored a two-goal cushion, only for Philippe Coutinho and Mamadou Sakho to make it 3-3 and worry BVB.

Time seemed to be running out – until James Milner summoned a cross from the byline in front of the Kop and Lovren leapt at the back post to power the decider past the goalkeeper and set off a celebratory ‘You’ll Never Walk Alone’.

Klopp made six changes to his starting XI for the return match, with Emre Can available again following domestic suspension and first-leg goalscorer Origi charged with spearheading the attack.

Before the game began, a minute’s silence was held in memory of the 96 supporters who lost their lives at the Hillsborough disaster 27 years ago on Friday, with both the Kop and the away section forming mosaics in tribute.

Dortmund set the tone for their performance straight from kick-off and Aubameyang had already curled a left-footer yards wide of goal before the Bundesliga side struck twice in quick succession to stun the Reds.

Each came at the end of a rapid counter-attack, the first on five minutes a rebound conversion by Mkhitaryan inside the box after Simon Mignolet had stopped Aubameyang’s effort from Gonzalo Castro’s dinked delivery into the middle.

Then in the ninth minute, Reus sped through a series of Liverpool challenges from halfway and clipped an outside-of-the-boot pass around Sakho and into the path of Aubameyang, who lashed a finish into the top right corner.

Dazed by how drastically Thomas Tuchel’s team had overturned the state of the tie, it took the Reds time to mount a response – but they soon forged some chances through Origi.

The Belgium international was thwarted by a last-gasp Sokratis Papastathopoulos block as he bore down on goal, next picked out Alberto Moreno at the back post to volley wide, and then flicked off target himself following industrious work by Milner.

A slight deflection saw a Coutinho drive from 20 yards travel wide as Klopp’s men searched for a way back into the game, though several further warnings were served of Dortmund’s ability to expose defences on the break.

Liverpool’s start to the second period echoed BVB’s in the first, and hope was restored for the home side within three minutes of the players returning from the interval.

Can was the creator as he burst forward, completed a one-two and found Origi in behind – and the in-form No.27 matched the approach work to score for a third consecutive game with one touch and a clinical, toe-poke finish.

The crowd erupted and again the momentum shifted, but only until Mats Hummels was afforded the opportunity to send a slide-rule pass into the run of Reus from the left and the forward side-footed around Mignolet for 3-1.

Yet Klopp’s charges have made a habit of battling back this season and, following a double substitution to bring on Joe Allen and Daniel Sturridge, his team soon gave the Kop serious reason to believe.

Coutinho was the scorer of the fixture’s fifth goal, exchanging the ball with Milner at the edge of the Dortmund penalty area and promptly whipping a shot into the bottom right corner.

Two more were needed, and then one. Coutinho turned provider, sending in a corner that found its way to an unmarked Sakho for the Frenchman to calmly nod in the equaliser – 3-3 on the night, 4-4 on aggregate.

But Liverpool were not finished and when Milner fashioned room for a cross in stoppage-time, Lovren rose above his marker to send an unstoppable header into the corner and his side into the Europa League semi-finals.