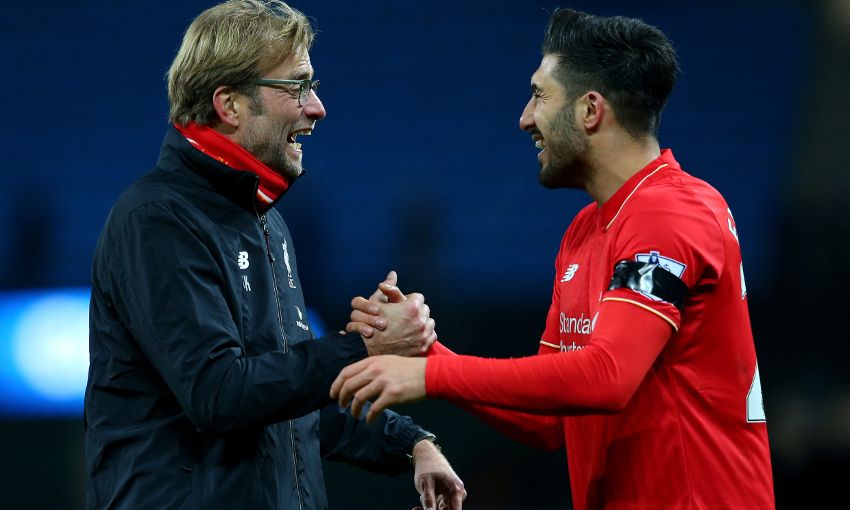 Ahead of Liverpool's final Anfield game of the season, Emre Can sat down with Liverpoolfc.com for an exclusive interview about his rapid return from injury, the feeling of reaching the Europa League final, his key moments in 2015-16 and much more...

You were looking at maybe four to six weeks out with your injury but came back in three. How difficult was it to get back that soon?

I wanted to come back very early – it was my target. I spent every day here at Melwood, for seven or eight hours. I worked really hard with the physios and fitness coaches and I’m happy that I’m back. It was a target to come back for the second leg [against Villarreal].

We saw the celebrations after getting through to the final – how did it feel at the end of that game?

We were all very happy and I think we played very, very well in that game. The atmosphere in the stadium was unbelievable – I’ve never seen something like this. Hopefully, now we will win the final as well.

You were greeted by the fans coming into the ground. Have you ever seen anything like that? Did it have a positive impact?

Of course, it was like a 12th man for us. I think Villarreal were a little bit scared from that and it was unbelievable what the fans showed in the stadium. I cannot describe it, it was just amazing.

How effective was the team’s performance against Villarreal, how quick you were to press and how intimidating you were?

I think they didn’t expect that we would press like that and play like that. They came to win the game and after the first half they were not too sure they were in the game because we played very well. It was very difficult to play against us. We have to show that in the final as well and then hopefully we will win the final.

How do you reflect on this season?

I think we had some ups and downs, but in the last few months you can see we play much better football, and we win more games and score more goals. If we keep up the good work from the last months, then hopefully we will win [trophies] next year.

Has this been your best season as a footballer so far?

Yes, I think it’s my best season. I played a lot of games and I play in the position I want to play. I’m very happy that I play there now. With Jürgen Klopp, I think I have made another step and I want to try to always give my best and I want to be better and I want to help the team. Next year I want to go again, but this year we still have three more games and they are very, very important games and we want to win them.

You have always said you would play in any position to be in the team, but we can see how comfortable you are now…

Of course, if I can help the team then I can play in other positions as well. But in that position I feel at home and I feel very comfortable. I think that’s my position.

Looking at the Premier League season and Leicester winning the league, does that give everybody hope?

Everybody knows that Liverpool is a big club and our target has to be, always, to win the title. Leicester City deserved to win this year because they played a great, great season and they were strong as a team.

You’re often one of the first to get a hug off the manager at the end of games. What kind of things does he say to you?

It depends on the game! If I play good then he does and if I play bad then I don’t get a hug, maybe! No, I always get a hug. Of course, when we win and when I make a good game, when he gives me a hug he says funny things. It’s always different things.

Of course it makes me proud when people say something like that about me. I want to always give my best for the team. I am like this and I want to improve in every game and every training session.

There were lots of changes for the Watford game. Are you somebody that wants to play every minute of every game?

To be honest, I want to play every game. But sometimes it is better to rest because we are just humans and everybody needs a rest. I’m very happy for the young lads that they get the chance and that they show what they are able to do. They played well in the last game when they got their chance. When you see the game against Watford, I think we have a very, very strong squad.

On Chelsea, it must have been a big moment for you to score against them in your first season…

It was my first goal for Liverpool and hopefully I will score again! It was a very big noise and it was an unbelievable feeling for me because I hadn’t scored before at Anfield. Hopefully, in the future I will score a few more goals.

Has Chelsea’s season surprised you?

I didn’t think that they would play the first half [of the season] like that, but they have a very, very strong team and they came back now. Everybody knows that Chelsea are a very strong team, they won the title last year and I think they will play for the title next year as well.

It’s the final game of the season at Anfield – what will be the strongest memory that you take from this campaign at home?

The game against Dortmund maybe. Because I’ve never seen something like that and it was a game for history. After they scored the third goal, it was unbelievable. I cannot describe it, because we came back. I think not too many people believed in us after that, and then we scored three more goals and we won the game. It was unbelievable.