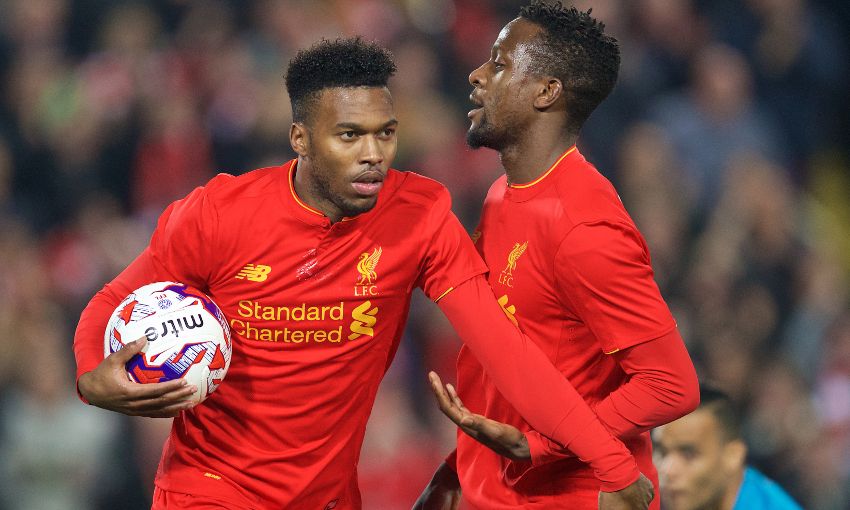 Divock Origi praised Liverpool's 'big heart' after they overcame Tottenham Hotspur 2-1 at Anfield to reach the quarter-finals of the EFL Cup on Tuesday night.

Jürgen Klopp changed his entire starting line-up from Saturday’s Premier League win against West Bromwich Albion and was rewarded with an impressive display from his revamped side, with Daniel Sturridge scoring twice to send the Reds into the last eight.

Origi offered a constant threat alongside Sturridge up front, and almost added his name to the scoresheet in the second half with a powerful long-range effort that Michel Vorm tipped over the bar.

And the Belgium international, who was withdrawn with a little over 20 minutes to play after going down with cramp, feels that such a confident all-round performance against a team of Spurs’ quality offers evidence of the strength in depth at Klopp’s disposal.

“[We’re] very happy. We knew it would be intensive, but I think we showed big heart,” Origi told Liverpoolfc.com.

“It was a mix between young players and experienced players and we tried to enjoy the game and keep control of the game.

“At the beginning we had to find each other, we also changed the formation, but the coach told us just to play with our qualities and that he believed in us 100 per cent, and we have a lot of quality in the group.”

The tie saw Origi make a first start since Derby County were defeated 3-0 in the previous round of the EFL Cup five weeks ago, and the striker admitted it took him a little while to find his rhythm.

“Of course, it’s been a while since I played 90 minutes so you have to get in the game, but I enjoyed the game,” he added.

Origi and Sturridge linked up well throughout the game and the No.27 was delighted to see his teammate back in the goals.

He said: “I think we tried to look for each other and we’re very happy that Daniel scored. He’s a top striker, we created the chances all together and it’s a good thing that we have a lot of options everywhere.”

Liverpool now await tonight’s draw for the last eight, and Origi is hopeful of going one better than last season, when the Reds were beaten on penalties in the final by Manchester City.

“We’re here and we want to go until the end. It won’t be easy, but we showed a lot of character,” the 21-year-old continued.

“We just have to play with a big heart every time and I’m sure that we have the quality to go until the end.”