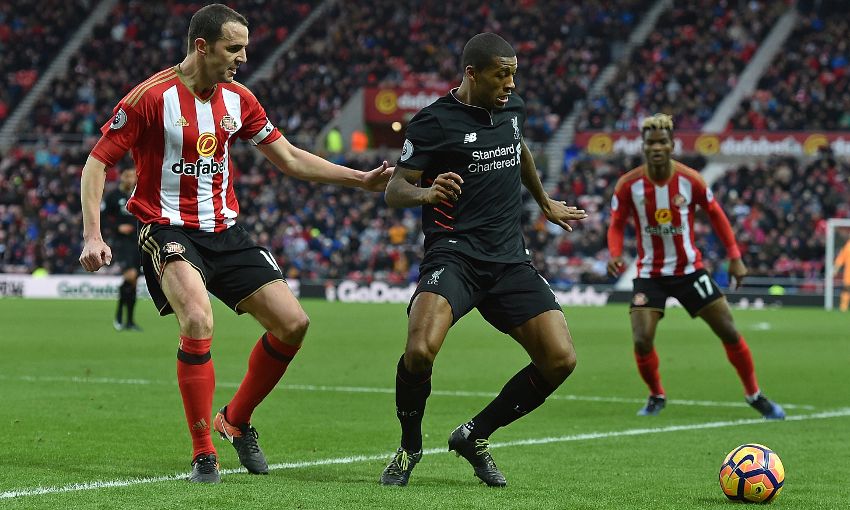 Liverpool were pegged back twice and forced to settle for a 2-2 draw with Sunderland in the Premier League on Monday.

The visitors led twice at the Stadium of Light – with Daniel Sturridge and Sadio Mane on target in either half to provide the foundation for a potential fifth successive win.

But a pair of Jermain Defoe penalties, the second with just six minutes to go after Mane was penalised for handball, denied Jürgen Klopp’s men maximum points in the north east.

Klopp made a single change to his line-up, with Sturridge brought in to replace Jordan Henderson after the captain sustained a heel injury against Manchester City.

The home side had former Liverpool forward Fabio Borini in their starting XI and Javier Manquillo – who spent 2014-15 on loan at Anfield – among the substitutes.

Both sides were back on the pitch just two days on from their previous Premier League outing, but there was still a zip to the opening stages which included chances created at either end.

Defoe’s low drive from 20 yards was scooped up by Simon Mignolet – returning to his former club – before Sturridge and then Georginio Wijnaldum had efforts repelled by Vito Mannone.

Better saves were then required from the two goalkeepers, with Jack Rodwell first denied after sending a well-struck blast towards the bottom corner and Sturridge subsequently seeing a curler clawed out at the last.

He did break the deadlock on 19 minutes, however.

Dejan Lovren met James Milner’s outswinging corner from the right with a harmless shot that became an assist when it bounced up for Sturridge to intelligently loop an angled header over Mannone.

But the Black Cats responded to the setback quickly and were awarded a penalty when Didier Ndong tumbled in the area under pressure from Ragnar Klavan and Wijnaldum.

The decision frustrated Klopp’s side and Mignolet was unfortunate not to reach Defoe’s precise conversion into the bottom left corner.

Sunderland’s talisman might have irked the visitors further soon after, as he sped onto Adnan Januzaj’s pass in behind – but Mignolet was out sharply to tip the ball from his foot and Klavan covered to block a follow-up by Borini.

Half-chances continued to come – with Liverpool having 11 shots and 72 per cent of the possession before the interval – but the score remained 1-1 when the sides returned to their dressing rooms.

There was a change for the away team when they re-emerged, with Alberto Moreno sent on in place of Milner at left-back.

Klopp’s charges continued to control the ball for long periods, though without finding a way through the Sunderland defence, at least until Nathaniel Clyne clipped a superb delivery across the area which Mane could have scored from. Instead, the Senegal international glanced his header harmlessly off target.

The hosts reminded Liverpool of their own threat in attack moments later, but both Borini and Defoe were crowded out as they shaped to shoot inside the box.

Intricate approach work on the right edge of the area by Adam Lallana and Sturridge freed the latter to try his luck from a narrow angle, with Mannone equal to the bobbling strike.

But when the corner was swept in, Papy Djilobodji’s attempt to head clear diverted the ball straight to an unmarked Mane at the back post – and the No.19 made no mistake from close range.

David Moyes’ side refused to give it up, however, and Defoe was handed another opportunity to successfully find the net from 12 yards when Mane blocked Seb Larsson’s free-kick with his hand, leaving Liverpool with just a point.

Report: Reds into quarter-finals after Minamino and Origi strike at Preston