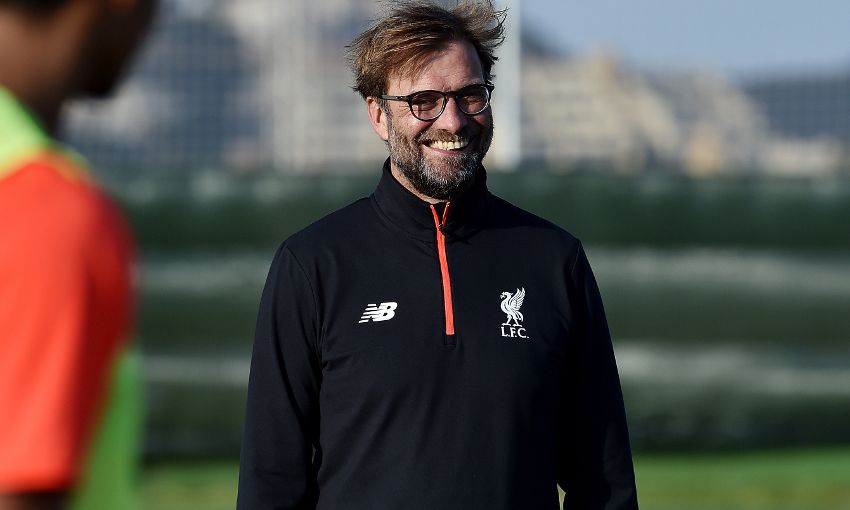 Jürgen Klopp has urged Liverpool to learn from a difficult January and use last weekend's win over Tottenham Hotspur as a springboard for the rest of their season.

The Reds will return home from La Manga later today having spent four nights away for a mid-season training camp.

Their trip to Spain was billed as something of a second pre-season by Klopp, with his side currently halfway through a 16-day break between that victory over Spurs and their next fixture, which sees them visit Leicester City on Monday February 27.

Liverpool endured a month to forget in January, winning just one of their nine games in all competitions, and then began February with a defeat at Hull City.

An outstanding performance and result against Tottenham reignited hopes of a strong finish to the campaign, though, and Klopp wants his team to continue in that vein for the remainder of 2016-17.

“Our life is completely dependent on results, that’s the truth. Sometimes when you’ve lost a game, the next day it’s 100 per cent raining! When you’ve won a game, the sun’s always shining but of course it’s not always like this, it only feels like this,” the manager told Liverpoolfc.com in La Manga.

“Each win can change the mood but if you lose, you have to use it, to get more greedy and if you win, you have to stay greedy. That’s the life of a professional footballer.”

Prior to the match against Tottenham, Klopp said he was targeting maximum points from the Reds’ final 14 Premier League games of the season.

So, with three in the bag and another 39 to play for, what’s his latest assessment of Liverpool’s chances of putting a lengthy winning run together?

“When I said that I’m pretty sure people thought ‘funny, try to be concentrated on the Tottenham game’, and we were. After Tottenham, we won in impressive style and I’m sure a lot of people think ‘oh yes, it feels more likely’ and that’s the moment you want,” Klopp noted.

“When you have this moment, you have to use it and keep it going.

“Of course, Leicester, it’s a difficult situation for them. They’re fighting for the league 100 per cent now and maybe this is the moment they recognise there’s really nothing else to do in this season other than to stay in the league and be really concentrated so we, if you want, could be the first team to face this ‘new’ Leicester. But it’s possible [to win].

“And then Arsenal is coming [to Anfield on March 4] and we all know how good they are, so it’s difficult yes, but it’s possible [to win] and that’s what I always say - as long as it’s possible let’s try to do it, let’s really try to do it. For this we need everybody in the best mood.

“January was nothing we needed, but we had it. It was kind of an experience, kind of a reminder. Everything is good until the moment when it’s not that good anymore - [then] it’s not only not good anymore, it’s as bad as it ever was!

“I can understand that people feel like this, but it’s not real, it’s not true. The truth is that we always have a chance. I’ve said a few times, I’m not the best manager in the world but I’m really good at staying on track.

“Most of the time in my life I had to fight for other things that are not that valuable - staying in the league, try to survive somehow, as a player especially.

“Life was good but not because life was good, but because I gave life the chance to be good, even when the pressure was high. That’s what we could do.

“So, let’s use the experiences we made this year, let’s learn from it and yes, let’s be stronger after all these things. The future is still bright.

“This is a long-term project but that doesn’t mean we are not ambitious in this season. We are very, very [ambitious] to have the biggest success we can get, but we’ll only know at the end of the season what it is.”

Klopp also explained that the milder conditions in Spain have been more conducive to completing tactical work on the training pitch.

“We are a team which obviously needs training and likes training, and uses training for specific things. So we all know in England at the moment the weather is not that bad, but tactical things we had to do before the Tottenham game, we had to use that time but it was freezing!” he added.

“Tactical things are not about running around, they’re about explaining, about finding the right spaces, playing the pass at the right moment and all that stuff, so it’s without intensity.

“So that’s what we want to do here, to make the next step in the right direction and keep reminding ourselves about the really good things in our mind and for the rest of the season.”